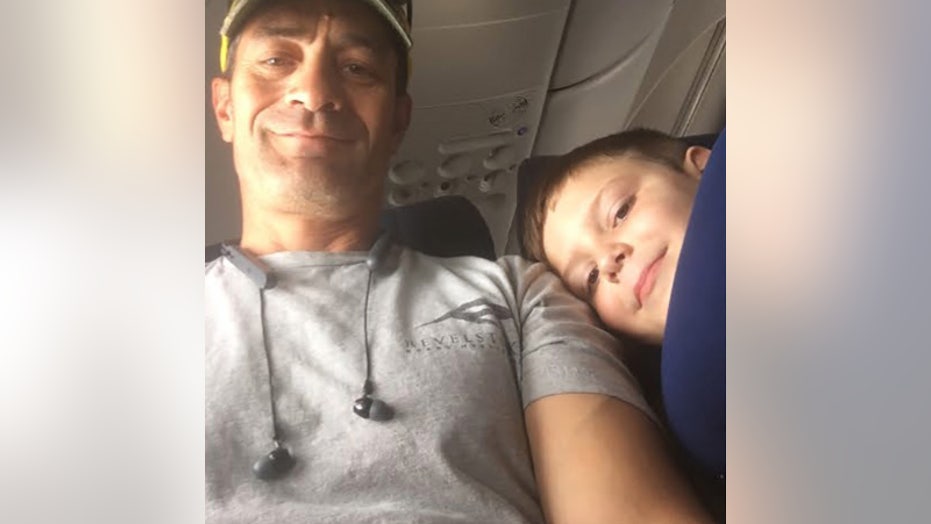 A woman in Las Vegas is heaping praise on a kind stranger who looked out for her autistic son during the boy’s first flight on his own.

Alexa Bjornson had recently sent her son Landon to visit his father in Oregon. But since Landon was flying alone, and also has high-functioning autism, she sent him along with a note to give to his seatmate, explaining that Landon “might be nervous” and ask “Are we there yet?” many times.

“Please just make him feel safe and comfortable,” Bjornson requested, as she explained in a Thursday Facebook post.

She added that she included $10 inside the note, for Landon to give to whomever he sat next to, as a thank-you for helping out.

Fortunately, Bjornson later received a sweet message from the man who ended up being Landon’s seatmate, explaining how he and his new “travel buddy” had a great time on the flight.

“Alexa, my name is Ben,” wrote back Ben Pedraza. “I was Landon’s seat neighbor for his flight to Portland. He did ask if we were there yet several times but he was a great travel buddy. We had a good time and played a few rounds of rock-paper-scissors. He’s a great kid and you’re a lucky mom."

Pedraza also wrote that, while he appreciated the $10 Bjornson sent along, he didn’t need it, and donated it to an autism-focused charity.

“My heart just dropped,” Bjornson told KATU of seeing the message, which included a photo of Landon and Pedraza on the flight.

“I am so grateful to this individual, and that there are still kind people in the world who make a difference like I try myself to do as well,” Bjornson added on Facebook.

Pedraza further told Fox News that after speaking with Landon, he'd like readers to follow his lead and lend support to autism-focused charities.

"I’d like to challenge readers to also donate to autism organizations or bullying-awareness organizations," Pedraza told Fox News. "Landon mentioned he was sometimes bullied, and although we had fun, that was a sad moment for me. I could tell it was for him too."

Pedraza later confirmed to KATU that, despite making friends with Landon on the flight, Landon did have one request.

“We were cracking jokes, and after a while, he asked me to quit making dad jokes,” Pedraza said.