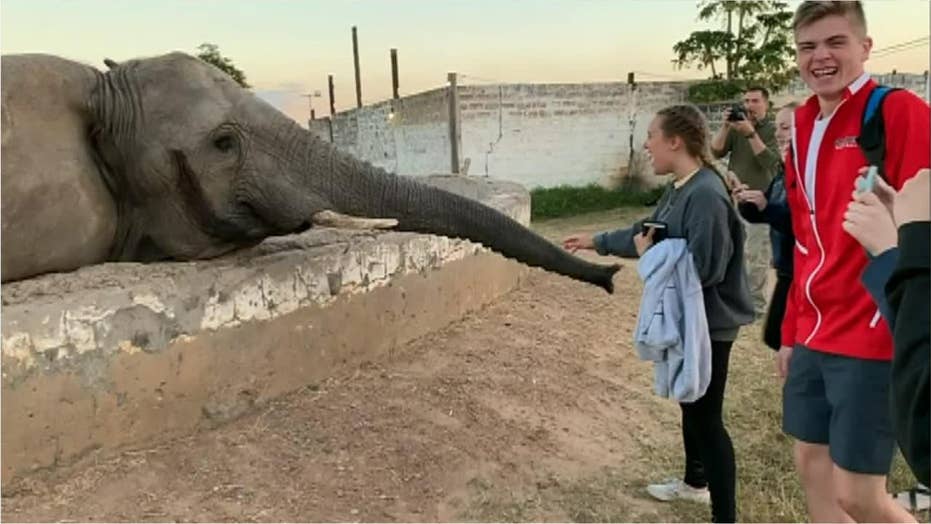 Watch as an elephant slaps a girl in the face as she tries to take a photo.

A student got a little more than she was expecting from her wildlife photo shoot when an African elephant smacked her in the face with its trunk.

The unnamed Pennsylvania girl shared that she was on a 12-day mission trip in Zambia with her high school, Grace Prep in State College, when the incident occurred.

MAN GETS CAUGHT WITH UNASSEMBLED 3D PRINTED GUN AT AIRPORT

The group was walking to dinner on their first night in the African country, after nearly 30 hours of travel, the girl said, when they came across the large female elephant.

“So that evening we planned on taking a nice walk to dinner but before we did, we saw the beautiful elephant perched on the edge of its evening enclosement. (This was a female elephant that has the freedom to roam in its 10,000-acre reserve all day and voluntarily returns each night for a meal and a bath.)” she wrote in a letter obtained by Fox News.

However, as she was “admiring the beauty of this animal by taking photos and petting it as it was reaching out,” the elephant reared back its trunk and slapped her in the face.

“I felt like 10 people had punched me at once as I was catapulted backward and my phone flew forward to the ground,” she wrote, stating another boy on her trip was behind her and caught her before she fell.

Though the initial shock stunned the high schooler, she managed to shake it off — no hard feelings.

“Yes, I had the wind knocked out of me, no it didn’t hurt, yes I’m okay, and yes I still love elephants!”

“One of the best parts is that it was all captured on video so everyone, knowing I was okay, could get a good laugh out of it,” she added.

Others have been shocked by the video, which went viral with over 10 million views after it was shared on Twitter June 28.

However, there were some who were upset by the attention the elephant was getting, believing it may have been held in captivity — a claim the girl fiercely denies.

Despite all the attention – and the punch – she said she would do it again, noting her noble cause.

“This was a very shocking, interesting, and somewhat funny start to an amazing life-changing team experience,” she wrote. “Not just because I was hit by an elephant, but because I had the privilege of working with such amazing people and built relationships I will remember forever. If I had to get whacked by an elephant to partner with this amazing ministry again, I would do it all over the same exact way!”

The group teamed up with the Heart of the Bride Ministries to help homeless young boys and men receive an education, among other outreach programs.