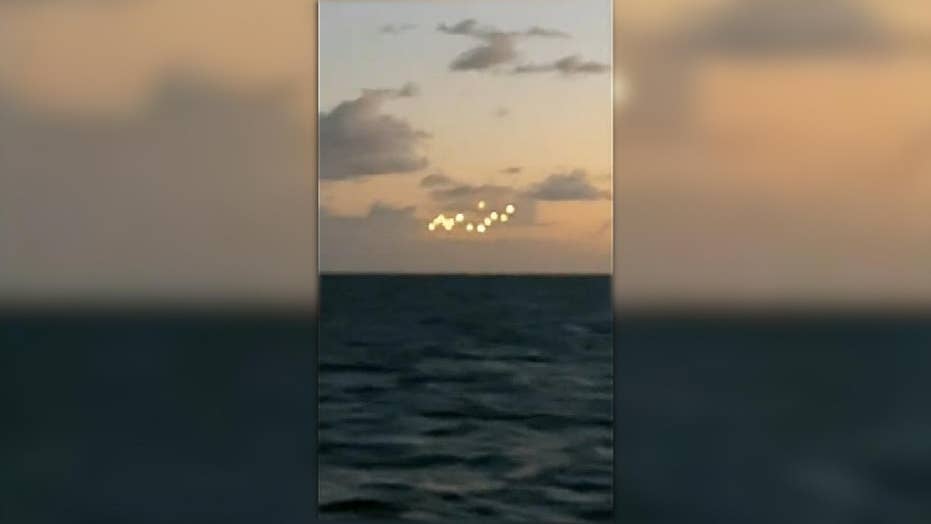 Video of a mysterious group of lights in the sky captured off North Carolina’s Outer Banks by a man visiting the area.

A video showing a series of unidentified flying objects over North Carolina's Outer Banks has gone viral on YouTube, racking up more than 370,000 views.

The video, first reported on by Fox 10 Phoenix, was posted to the YouTube account of William Guy. After a brief period of calm over the ocean, 14 glowing lights hovering over the water suddenly appeared.

Someone on the video can be heard saying, "Look, nothing in the sky at all, then all of a sudden...” “Anybody tell me what that is?” the person, reported to be Guy, continued.

People in the background can be heard commenting on the lights.

One person who commented on the video said that he believed they were from a nearby military base.

"I am pretty sure I know what those lights are," Derrick Chennault, who identified himself as a former Marine based at the 2nd Marine Air Wing in Cherry Point, N.C. wrote.

“We used to regularly drop flares out of the back of our plane in the evenings for military exercises in that area," Chennault continued. "They are one million candle power each so they were pretty bright and can be seen from far away and floated down slow as they hung from a parachute.“

The military base is approximately 125 miles west of the Outer Banks.

However, a spokesman from the military base confirmed to Fox 10 Phoenix that no aircraft from that base was in the area the day the video was posted.