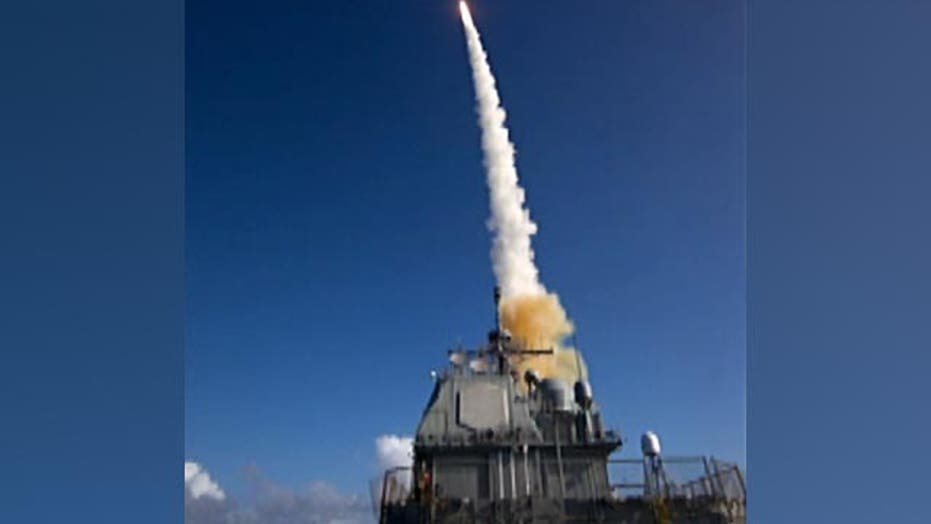 It enables people from all over the world to step inside a virtual rocket engine, or a missile, or a satellite. Or they can walk the deck of a naval vessel at sea, or investigate a potential battle environment.

Why work in a cubicle when you can work in CAVE, the walls of which are covered in 3D technologies? It’s like working in the Batcave.

CAVE can be the size of a small theater containing multiple futuristic S3D display screens, or it can be operated through a single set of 3D glasses and an S3D-enabled workstation linked to a remote site. Put on some eyewear and you’re transported straight into its immersive 3D reality space.

For the U.S. Defense Department, CAVE has already produced impressive results. The design for the SM-3 Block IIA, the Pentagon’s new “hit to kill” ballistic missile, was forged in the Raytheon Batcave.

Hitting bullets with bullets
The SM-3 – short for Standard Missile-3 – is a “missile-killer,” and it’s a fundamental part of America’s defense system. In a process often described as a bullet hitting a bullet, Navy ships use it to take down short- to intermediate-range ballistic missiles in space.

The collision is like a 10-ton truck traveling at 600 mph – so massive that it destroys the target without any explosives.

Now Raytheon is working with Japan’s Mitsubishi Heavy Industries to develop the next-generation SM-3: the Block IIA, which Raytheon is calling a “game changer.” It will be deployable on land and at sea, and it will travel farther to take out threats sooner.

Bigger than earlier versions, the SM-3 will feature a larger kinetic warhead and larger rocket motors, giving it greater reach and the ability to defend broader areas.

Useful for a range of missions and locations, it will be the centerpiece of the European missile defense system. It got its first land-based test at White Sands Missile Range last October, and it looks to be on track for deployment in 2018.

Building missiles in CAVEs
It wouldn’t have been possible without CAVE, which provided a number of advantages for designing the missile. It is much faster and easier to look inside a 3D model to check things and make adjustments than it is to take apart a physical prototype.

It also removes a lot of trial and error. CAVE identifies potential mechanical defects that might not have been found without immersive S3D. Being able to spot trouble early helps to avoid building expensive designs that won’t work.

Creating a virtual prototype is not only far more cost-effective than building a physical one, it also accelerates the speed of design and enables getting solutions in the hands of the government faster.

CAVE reduces costs in several ways. It reduces travel costs, because designers and end users around the world can collaborate and solve problems in the same virtual “meeting place,” regardless of their physical location.

CAVE has been used not just to design missiles, but to design a futuristic factory where they can be built.

Designers used the 3D augmented reality technology to test all aspects of a missile plant with a laser-guided robot fleet long before any construction began.

Going forward, Raytheon plans to share CAVE technology with college students as part of its initiative to inspire them to engage in science, technology, engineering and mathematics.

If there’s one thing that’s more fun than the conventional methods of explaining core concepts like trajectory and velocity, it’s learning how to build satellites or jets in the Batcave.