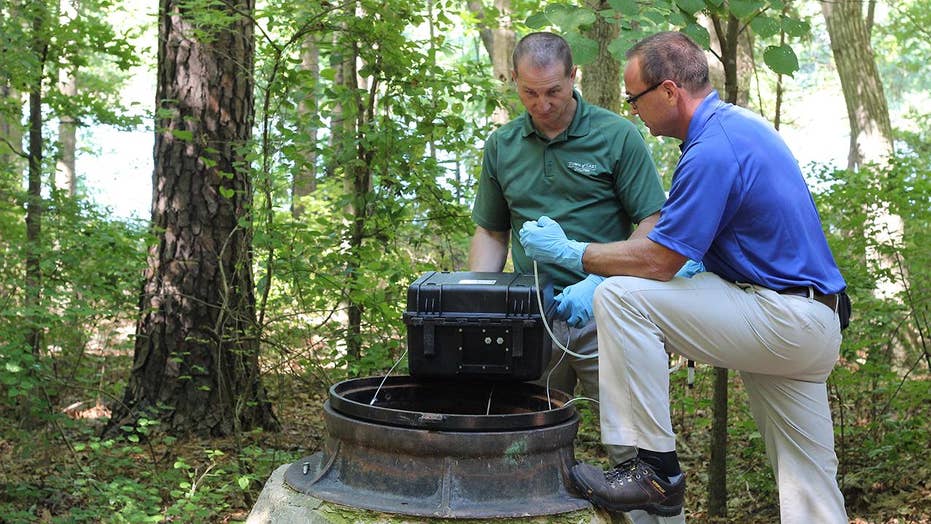 N.C. first to use robot to test sewage for opioid usage

As opioid abuse continues to kill people across the country – there were 33,000 opioid-related deaths in 2016 – Cary, N.C. began using a special device that pinpoints what areas of the city have high opioid abuse by testing the sewer water

CARY, N.C. – A small town in North Carolina has found a novel way fight the war on opioids: by using robots to test people’s poop.

The approach aims to help the city identify when the city is facing a major public health threat and what areas need an opioid intervention.

As opioid abuse continues to kill people across the country – there were 33,000 opioid-related deaths in 2016 – Cary, N.C. began using a special device that pinpoints what areas of the city have high opioid abuse by testing the sewer water.

It’s is the latest strategy by officials in small towns, and rural ones, who have been forced to battle an epidemic ravaging the lives of an alarming number of people. Other cities monitor opioid use using sewer water – but Cary is the first city in the country that uses a portable device to do so.

"If we have a problem – [there was a] 70 percent increase in overdoses last year – then the problem is very significant in this country,” Cary Town Manager Sean Stegall said. “We feel we can play a leadership role in that.”

“As someone processes opioids through their body, they excrete a different type of opioid from their body and into the sewer system,” said Project Manager Donald Smith. (Fox News)

In May, the town's management began a partnership with Massachusetts-based research company Biobot Analytics. The company created a small potable device specifically designed to test for digested opioids called metabolites.

“As someone processes opioids through their body, they excrete a different type of opioid from their body and into the sewer system,” said Project Manager Donald Smith.

The device, called an automated water sampler, looks like a miniature lab inside a black pelican case. Project team members take the light weight container to manholes in strategically selected neighborhoods. It takes two people to carefully lower the sampler a few feet into a manhole. The suspended box has a tube that dangles from the bottom of the device and into the rushing water.

“The device collects a small amount of waste water and processes the waste water through membranes over the course of 24 hours,” Smith said.

The results would not pinpoint who used the opioids but identify areas with high concentration of users. Each of the town’s 10 devices can test waste from 15,000 residents, and the findings will be used as a marker to see whether opioid use is on the rise.

Many residents have hailed the device, saying it’s an important tool in the devastating fight against opioid abuse.

“There’s no privacy in your poop,” said criminal defense attorney and former prosecutor Vinoo Varghese. “Once you place garbage out in the public you’ve given up any rights to privacy.”

He said, however, the tactic could raise privacy concerns if the data collected is turned over to law enforcement.

“If they are charging people with crimes… if it gets to that level then the courts may revisit the issue about privacy,” Varghese said. “But if it doesn’t go that far, and it’s used for basically data collection and medical purposes to help fight the crisis, then I don’t think there is any basis to say there’s an invasion of privacy.”

In May, the town's management began a partnership with Massachusetts-based research company Biobot Analytics. (Fox News)

But some residents are still raising concerns.

Nzinga Speller, who recently moved to the area from Chicago, said it’s unclear where that data will end up.

“Who’s going to be using this information?” Speller asked. “What are they going to be doing with it? Will it be accessible to the public?”

Biobot president and co-founder Newsha Ghaeli said locations will receive and own the data, and communicate it with the public.

“It really provides us with data that doesn’t exist today to see what we can learn from that and then develop approaches after that,” Stegall said.

Stegall said he hopes the information will be used by public and private health agencies as a way to combat the opioid crisis.

Doctors say it provides a great baseline of data, but analyzing the results isn't easy.

“There are so many factors in addition to genetics, in addition to environmental factors.…Certainly as individuals or communities age, ethnicity, sex….as well as whether an individual has hepatic or reno impairment….all these things determine how fast we break down opioids and how much of the biproducts we measure in the urine,” Gastroenterologist Neeraj Sachdeva said.

Each of the town’s 10 devices can test waste from 15,000 residents, and the findings will be used as a marker to see whether opioid use is on the rise. (Fox News)

“The President’s Commission on Combating Drug Addiction and the Opioid Crisis has recommended (p60) that data collection systems need to be improved and the data gaps need to be filled and revitalized using such novel approaches, such as testing wastewater in highly circumscribed regions for estimating drug metabolites,” Ghaeli said in a statement.

Sachdeva said over the years, the information gathered will be invaluable.

City management expects the first data phase to be completed by September. After that, the town can apply for additional grants to fund the program.

Other cities, such as Tempe, Ariz., are also trying to incorporate more fecal studies into their response to the opioid crisis.