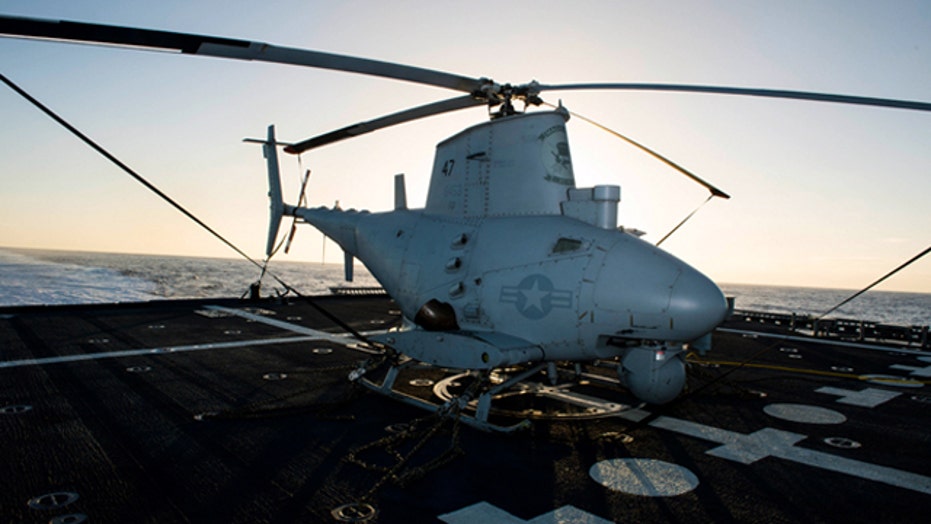 The latest Fire Scout helicopter is better, faster and stronger with twice the stamina for missions. Even more impressively - it flies by itself.

The latest version of the Fire Scout is a significant upgrade - it can fly nearly twice as long and carry three times more intelligence, surveillance and reconnaissance payloads.

It is expected to be the first upgraded Fire Scout to deploy for the Navy.

The MQ-8C Fire Scout is a fully autonomous helicopter operating with four blades and a single-engine. This is no toy sized helicopter drone - at about 40 feet long, nearly 11 feet high and just under 8 feet wide, it is the same size as a traditional helicopter.

The Fire Scout has VTOL (Vertical Take Off and Landing) capabilities, performing the maneuvers without a human pilot in the cockpit.

At sea, the helicopter drone can take off and land on any aviation-capable warship. When supporting ground troops, the rugged Fire Scout doesn’t need a prepared landing zone.

Fire Scout is a great option for providing situation awareness and precision targeting support to the U.S. military. And by flying without an air crew, it can reduce the risk to military personnel.

Commanders can deploy the helicopter on a range of missions from intelligence, reconnaissance and surveillance (ISR) through to target acquisition.

The MQ-8C is an upgraded version of the existing MQ-8B Fire Scout and uses a larger airframe.

Northrop Grumman has merged the advanced systems developed for the previous Fire Scout with the Bell 407 helicopter. A popular model, there are over 1,000 Bell 407s in service and the helicopter has racked up more than 3 million flight hours.

This means that the latest Fire Scout can carry 2,650 pounds. The helicopter drone can also conduct missions for 14 hours without refueling and has an operational ceiling is 17,000 feet.

Carrying an average payload of, say, 600 pounds, the drone’s endurance is reduced, but it can still conduct an 11 hour mission.

The latest Fire Scout is also a bit faster than its predecessor, with a maximum speed of about 160 miles per hour. The engine is a Rolls Royce 250-C47B with full authority digital electronic control.

To support missions, the aircraft can be fitted out with a range of sensors for reconnaissance, surveillance and target acquisition.

Essential for tough landings on ships, the drone’s system is able to precisely track and understand the roll and pitch of sea surface conditions.

The Fire Scout has also been designed to operate with current and future control systems.  It can communicate with shipboard controllers using the Navy’s tactical control station as well as with the U.S. Army’s universal ground control station.

The sloped takeoff and landing tests are preparation for at-sea testing. The tests are designed to be as real as it gets to actually operating on a Navy ship.

The latest Fire Scout has also undergone electromagnetic tests, which are designed to ensure it will be compatible with ship-based emitters such as radar. It has also completed dynamic interface testing -  a test that evaluates deck handling and communications networks.

This winter, the MQ-8C's first ship-board flight tests will be conducted aboard the USS Jason Dunham (DDG 109). The Navy will use these results to evaluate the system for deployment and operational use.