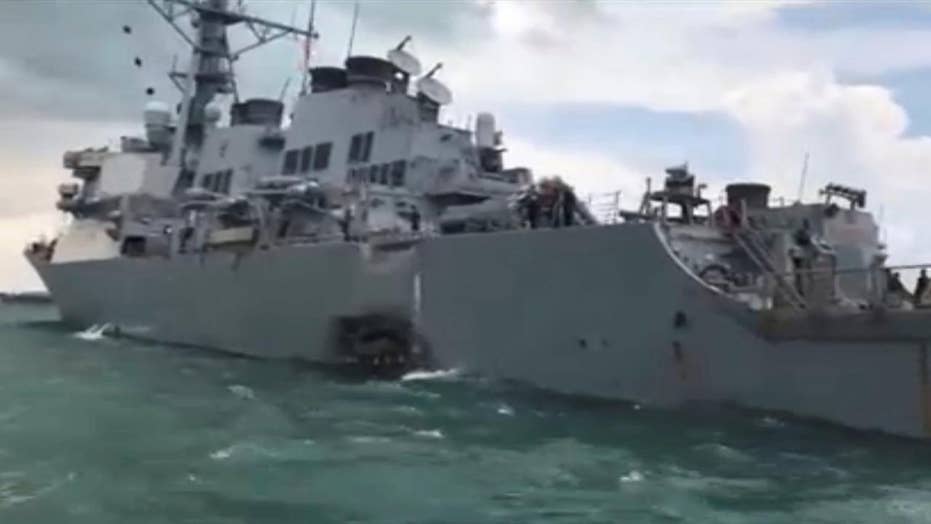 A search effort is under way in the waters off Malaysia and Singapore for sailors missing from a collision between a U.S. Navy warship and a civilian vessel; Jennifer Griffin reports for 'Special Report'

A top U.S. Navy admiral on Monday called for a swift and thorough investigation into Monday's collision of the USS John S. McCain into an oil tanker near Singapore -- marking the second deadly mishap that occurred in the Pacific in the past three months.

"Some remains" of the sailors who were declared missing after the collision were found in a sealed compartment aboard the destroyer on Tuesday. Meanwhile, Malaysian officials said they found one body, but were still in the process of identifying it.

Adm. John Richardson ordered an operational pause in all the fleets around the world while the Navy works to determine the factors behind the collision. Richardson tweeted that the Navy will conduct a wide investigation, including a review into the possibility of "cyber intrusion or sabotage," -- though a Navy official told Fox News on Tuesday any possible cyber sabotage played "no role" in the USS John S. McCain incident.

Richardson made clear that there is no evidence of a hacking at this point, but some cyber experts have raised to possiblity given the location of the warships.

Jeff Stutzman, an ex-information warfare specialist in the Navy who works at a cyber threat intelligence company, told McClatchy that “there’s something more than just human error going on."

"When you are going through the Strait of Malacca, you can't tell me that a Navy destroyer doesn't have a full navigation team going with full lookouts on every wing and extra people on radar," he said.

Richardson called for a review of the 7th Fleet’s maintenance, personnel and equipment in the region. He called on a new focus on surface warfare training, which includes tactical and navigational proficiency.

The USS John S. McCain suffered “significant damage” to its hull after a collision with an oil tanker on Monday near Singapore.

The 7th Fleet said in a statement that damage to the guided missile destroyer's hull flooded nearby compartments including crew berths, machinery and communications rooms.

Aside from the dead and missing sailors, four were hospitalized in Singapore with injuries after being evacuated by helicopter.

On June 17, the USS Fitzgerald was badly damaged in the collision off the coast of Japan. The waters off Japan are considered congested and considered to be challenging to navigate.

The seas were relatively calm, and visibility was unrestricted. The bow of the container ship, the Philippine-flagged ACX Crystal, slammed into the Fitzgerald's right side above the waterline, quickly flooding several areas inside the ship, including a berthing, or sleeping, area.

The New York Times reported that there were radar officers working on the bridge and combat information center below and “should have spotted the freighter’s image on their screens.” One sailor wrote the paper: “All I can say is, somebody wasn’t paying attention.”

The top three leaders aboard the USS Fitzgerald were removed from duty.

Aside from the USS McCain and USS Fitgerald incidents, the Navy cruiser USS Antietam ran aground dumping more than 1,000 gallons of oil in Tokyo Bay in February. In May, another cruiser, USS Lake Champlain, hit a South Korean fishing vessel.

Itay Glick, the founder of a cyber security firm called Votiro, told News.com.au that his initial reaction to news of the USS McCain collision was that it may have been hacked. Glick worked in the cyber-warfare unit of the Israeli intelligence agency and pointed to the possibility of involvement from Russia and China.

“I don’t believe in coincidence,” Glick said. “Both USS McCain and USS Fitzgerald were part of the 7th Fleet, there is a relationship between these two events and there may be a connection.”