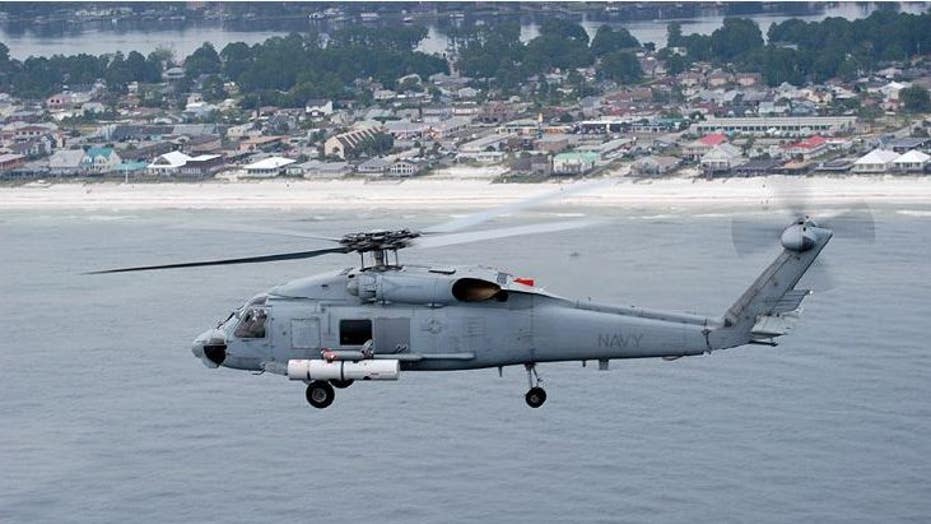 The Navy is looking at ways to improve its now operational airborne laser system designed to track enemy mines from low-flying helicopters and expand the surface area from which mine detection takes place -- and no longer rely purely upon more narrowly configured, mechanized or towed mine detection systems.

The system, called Airborne Laser Mine Detection System (ALMDS) enables shallow-water warships such as the Navy's Littoral Combat Ship (LCS) have a much safer sphere of operations as commanders will have much greater advanced warning of mine-cluttered areas.

Northrop and Navy developers are looking at ways the ALMDS can be further enhanced through ongoing modernization efforts, such as current work to integrate AI.

“We are looking at automating the entire kill chain for MCM (Mine Counter Measures). Now the ALMDS flies on an MH-60. Perhaps we can get that into a smaller form factor and put it on the Fire Scout,” Kevin Knowles, Director of Business Development for LCS, Northrop Grumman, told Warrior Maven in an interview earlier this year.

The ALMDS pod is mechanically attached to the MH-60S with a standard Bomb Rack Unit 14 mount and electrically via a primary and auxiliary umbilical cable to the operator console, according to a statement from the system’s maker, Northrop Grumman.

“It does not use any bombs. It flies at a certain altitude and a certain speed. The laser emits beams at a certain rate. Cameras underneath the helicopter receive reflections back from the water. The reflections are processed to create images displayed on a common consol on the helicopter,” Jason Cook, the Navy’s Assistant Program Manager, ALMDS, told Warrior Maven in an interview last year about the system.

FUTURE FIGHTER JETS WILL USE AI-ENABLED WEAPONS AND SENSORS

Cook explained that the camera or receiver on the helicopter is called a Streak Tube Imaging LIDAR (STIL). The laser is released in a fan pattern, and photons received back are transferred into electrons, creating a camera-like image rendering.

Northrop information on ALMDS further specifies that the system can operate in both day and night operations without stopping or towing equipment in the water.

Having this technology operational, it seems, offers a few new strategic nuances. First and foremost, detecting mines more quickly and at further ranges of course makes the LCS much more survivable. It will be able to pursue attack, anti-submarine and reconnaissance missions with a much lower risk of mine-attack. Furthermore, identifying the location of mines at greater distances brings the added advantage of enabling lower-risk small boat missions to approach target areas for shore missions, surface attack or recon.

Finally, given that the LCS is engineered for both autonomous and aggregated operations, ALMDS could provide occasion for the ship to alert other surface and undersea vessels about the location of enemy mines. In fact, Northrop writes that ALMDS provides accurate target geo-location to support follow on neutralization of the detected mines.

Some of the technical details of the system are further delineated in a research paper written by Arete Associates – a science and technology consulting firm with a history of supporting entities such as the Office of Naval Research and the Air Force.

“A high resolution 3-D image of the scene is produced from multiple sequential frames formed by repetitively pulsing the laser in synchrony with the CCD (Charge Coupled Device) frame rate as an airborne platform "push broom" scans or as a single-axis scanner on a ground-based platform scans the laser fan beam over the scene,” the Arete Associates essay titled “Streak Tube Imaging LIDAR For 3-D Imaging of Terrestrial Targets, writes. “The backscattered light from the objects and the terrain intersecting the fan beam is imaged by a lens.”

STIL technology, while only recently becoming operational with ALMDS, has been in development as a maritime surveillance system for many years. A 2003 study from the Naval Surface Warfare Center cites how “pulsed light” sent out from a three-dimensional electro-optic sensor STIL system can “identify objects of interest on the ocean bottom.” -- For Warrior Maven's Previous Story on ALMDS CLICK HERE

The Navy can now use sonar and video-guided underwater warheads to attack and destroy enemy sea mines at the bottom of the ocean, improving protection for submarines and surface ships while bringing new combat ability to maritime war operations, service officials said.

Airborne Mine Neutralization System “lowers a mothership into the water from a helicopter and then deploys mini-torpedoes that are on a fiber-optic cable….which swims up to a mine and explodes,” Knowles said.

The AMNS, also called the Archer Fish, receives surveillance information from a range of different Navy systems before it reconfirms the target, lowers beneath the surface, and destroys the mine.

The system consists of a Load Handling System (LHS) and destructor, or warhead. The LHS, which is used as an interface between the explosive destructor and common console on board the helicopter, can carry up to four destructors.

The destructor is equipped with a sonar system, video camera and light to confirm the identified enemy mine; it connects with the common console through a fiber-optic data link, Navy officials said. The LHS contains all the data-processing hardware and software, developers explain.

“The destructor is negatively buoyant, has six degrees of motion, can maintain a hover position and can be operated in either automatic or manual mode. The destructor can monitor depth and relative distance from the bottom and has the ability to avoid bottom plowing. The destructor's position is determined by an Integrated Track Point II acoustic tracking system contained in the LHS,” NAVSEA Spokesman Alan Baribeau told Warrior Maven last year - for a previous Warrior report on the system.

The abundance and sheer variety of mine threats can also make detection more challenging. Some so called “bottom mines” can be buried or shallow-water mines easily triggered by surface ships or submarines. Moored mines, however, often tethered to the ocean floor, can be found in deeper parts of the water column. They can linger below the surface or possibly operate at much greater depths to target deeper draft ships, according to a 2014 NATO essay called “Naval Mines and Countermeasures.”

“The explosive and detonating mechanism (of moored mines) is contained in a buoyant metal or plastic shell. The depth below the surface at which the mine floats can be set so that only deep draft vessels such as aircraft carriers, battleships or large cargo ships are at risk,” the NATO paper writes.