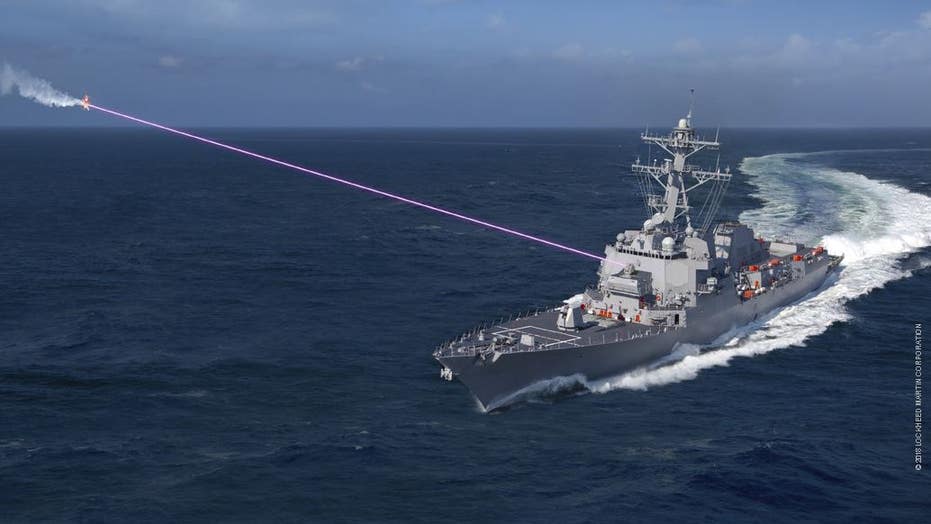 Now, attacks such as these will also be countered with laser weapons being added to the equation, bringing new dimensions to maritime warfare on the open sea.

By 2021, U.S. Navy destroyers will be armed with new ship-fired lasers able to sense and incinerate enemy drones, low-flying aircraft and small boat attacks -- all while firing at the speed of light.

Lasers have existed for many years, but the Navy is now adjusting emerging Tactics, Techniques and Procedures to how new high-powered, ship-fired lasers will change ship defenses….and attack options.

Lockheed Martin and the Navy have been working on ground attack tests against mock enemy targets to prepare high-energy lasers for war. The weapon, called High-Energy Laser and Integrated Optical-Dazzler with Surveillance - or HELIOS - is engineered to surveil, track and destroy targets from an integrated ship system consisting of advanced radar, fire control technology and targeting sensors.

Working with the Navy, Lockheed has recently completed its Systems Design Review for HELIOS, a process which examines weapon requirements and prepares subsystems and designs. The intent is to engineer an integrated tactical laser system able to receive “real time operating feedback well in advance, before the system hits the ship,” said Brendan Scanlon, HELIOS Program Director, Lockheed.

The farther away an incoming attack can be detected, the more time commanders have to make time-sensitive combat decisions regarding a possible response. Therefore, having one system that synthesizes sensing and shooting changes the equation for maritime warfare.

Connecting HELIOS’ fire control with ship-based Aegis Radar, used for missile defense, enables a combined system to gather surveillance data from the radar while preparing to destroy the targets.

“Sensors provide cues to laser weapons, with the Aegis operator in the loop. You can use optical sensors to decide what else you are going to do, because the weapon tracks between Aegis and the laser subsystem,” Scanlon added.

This technical range enables some new mission possibilities for the laser weapon, such as an ability to use the laser weapon to “obscure adversaries optical sensors.” This can bring a number of advantages, such as throwing incoming drone fire, helicopter attacks or even anti-ship missiles off course.

Developers are now working on a handful of technical challenges known to make it difficult for mobile lasers to operate on certain platforms, without finding a way to accommodate large amounts of power. The Navy’s Program Manager for the Zumwalt-class destroyers, Capt. Kevin Smith, addressed this recently at Sea Air Space, explaining that a “power surge” is needed to operate lasers on ship.

“For directed energy weapons you need a surge. There is technology we are looking at right now to assess how the ship can have the energy storage that would facilitate that surge capacity,” Smith said.

Heat dissipation is another challenge which Lockheed HELIOS engineers continue to emphasize when it comes to arming ships with lasers; mechanical structures can help move heat away from an antenna and other essential equipment such as digital receivers.

Interestingly, the importance of combined sensing and shooting was identified in a 2003 essay in the “Journal of Directed Energy” called “High Energy Lasers for the Fleet.”

“Being able to visually identify a target from imagery at the engagement range of the weapon is a significant improvement over conventional weapons systems,” the essay states. (Roger McGinnis & Alfred Skolnick).

Increasingly, lasers are being developed for ballistic missile defense, a technology which would nicely complement ship-fired interceptors such as SM-3s. Pentagon officials explain that even if laser weapons are not yet strong enough to, for instance, knock out an ICBM in its Mid-Course phase of flight beyond the earth’s atmosphere - they might be able to help with targeting or identification. In this respect, lasers as sensors could help with targeting and sensor-shooter time when it comes to destroyer launched missiles developed to knock approaching ballistic missiles out of the air.

Ship-based lasers, capable of being scaled to adjust to specific threats, bring new dimensions to maritime defense, the Journal of Directed Energy states.

“Using proportional kill intensity ranging from non-lethal discouragement to catastrophic stoppage against close-in threats that could appear suddenly in the littorals or, as we have seen with the USS Cole in port, permits a ‘tuned to circumstance’ defense,” the text reads.

The intent with HELIOS is to advance laser technology and bring higher levels or power intensity, increased sensing ability and longer range, because some ship-fired lasers already exist. The Navy LAWs weapon, called Laser Weapon System, has been deployed for many years. The LAWs first deployed on the USS Ponce several years ago. HELIOS will massively extend the attack capabilities for ship-fired lasers and, perhaps of greatest significance, combine the weapon’s fire control with ship-based Aegis radar.