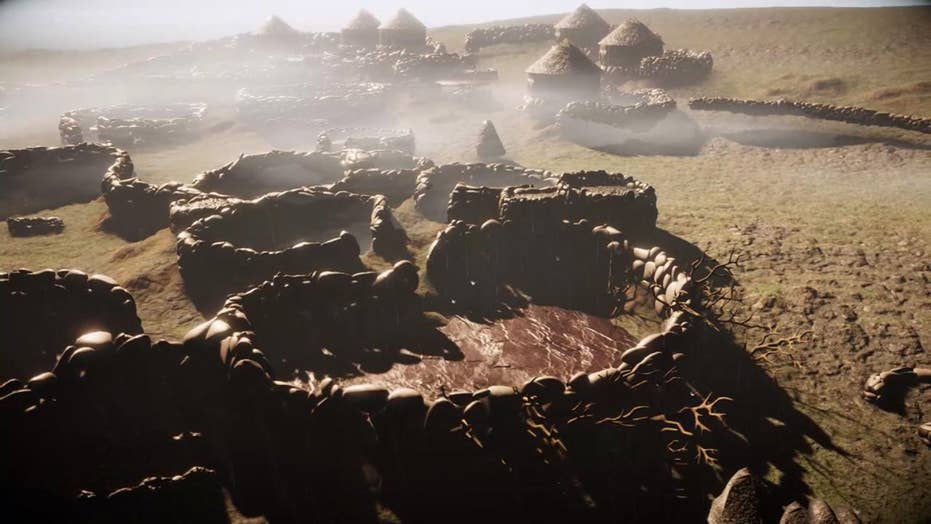 A lost city in South Africa was revealed in a new digital reconstruction. The ruins of Kweneng were found beneath thick vegetation.

Experts have created a stunning digital reconstruction of a centuries-old lost city discovered in South Africa.

The ruins of Kweneng were spotted beneath thick vegetation at Suikerbosrand near Johannesburg using sophisticated laser technology.

Karim Sadr, a professor at the School of Geography, Archaeology and Environmental Studies at the University of the Witwatersrand, told Fox News that researchers have been hard at work mapping and creating a digital reconstruction of part of the site.

“At the end of last year a fourth-year student completed a project on the detailed mapping of one of the stone-walled compounds and another ex-student has put together some interesting digital reconstruction of that compound,” he explained via email this week.

A digitally reconstructed compound in the lost city of Kweneng in South Africa. (Stephen Banhegyi)

The research is the latest in a series of high-tech projects revealing the lost city’s secrets. LiDAR technology, for example, was used to locate Kweneng.

LiDAR uses a laser to measure distances to the Earth’s surface and can prove extremely valuable to study what is hidden in areas with thick vegetation. The technology is also used extensively in other applications, including autonomous cars, where it allows vehicles to have a continuous 360 degrees view.

Sadr commissioned a LiDAR aerial survey of the first 10 square kilometers in late 2014 and the remainder the following year. “It was only in 2016 after poring over all of that detailed imagery that I eventually realized that the homesteads are not a scatter of villages but parts of one entity; a city, rather than a dispersion of homesteads,” he told Fox News in a separate interview last year.

The remains of the lost city were located using sophisticated laser technology. This digital reconstruction shows what Kweneng looked like. (Stephen Banhegyi)

The Conversation reports that the city was occupied by speakers of the Tswana language from the 15th century until about 200 years ago. Other Tswana cities were known to exist in the region, but not in that specific area. The Tswana city-states collapsed as a result of early 19th-century civil war, according to The Conversation.

More research is planned at the site of Kweneng. (Stephen Banhegyi)

More research of the site is planned, according to Sadr, who has been visiting the site for the last three decades. “At the moment, we are starting a new academic year here and I am awaiting three Ph.D. students to start on their various projects to do with aspects of Kweneng,” he told Fox News.