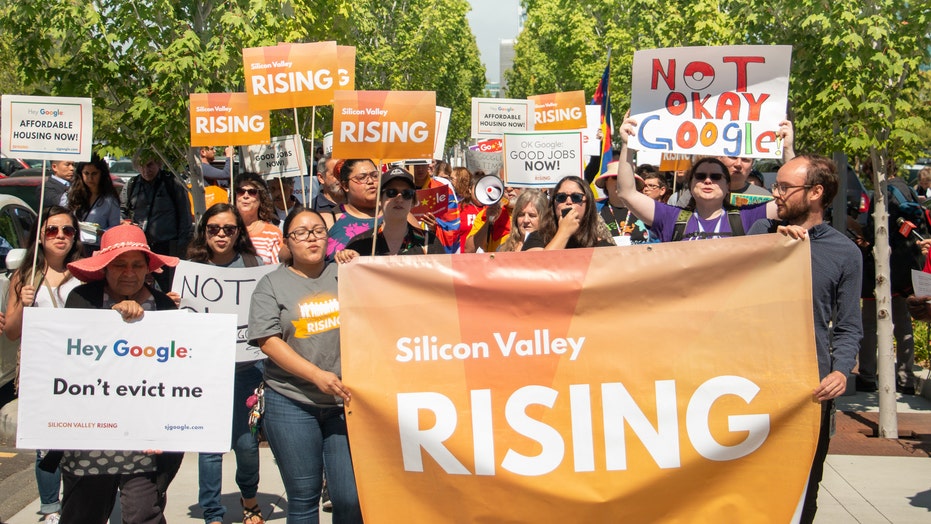 Google employees, community activists and investors protested outside its parent company's headquarters in a show of force amid a backlash over a series of incidents related to hate speech, the spread of white supremacist videos and misinformation.

The demonstration, which coincided with several shareholder proposals on Wednesday to reform and improve the tech giant, is the latest battle in an ongoing war brewing from within the Mountain View, Calif., company that has pitted its well-paid workers and independent shareholders against the company's top executives — with conflicts ranging from its now-shelved plan for a censored search engine in China, its handling of sexual harassment claims and allegations of retaliation against employees.

Carrying placards with slogans such as "Not OK, Google" and "Hey Google: Do Better," demonstrators excoriated the tech giant over a litany of issues, including gender-based pay inequity, sexual harassment and the company's deliberations for a search engine in China.

"Engineers and janitors marching side by side. This is what people power and solidarity look like," the #GoogleWalkout organizers said in a statement on Twitter. "Together we can put the needs of our most vulnerable communities first and uplift all of us."

“We’re here as members of the Google community saying that we have to do better,” Wyatt Ratliff, a Google employee, told Recode. “A lot of my co-workers are reporting sexual harassment to HR and HR is working to defend the company and the accusers.”

"The Chinese government already employs invasive, data-driven surveillance to track its citizens. The potential for it to weaponize data from Google searches could allow the government to expand its human rights abuses, including mass detentions of the Uighur minority. We have grave concerns about Alphabet possibly re-entering the Chinese market," Brockwell said.

Another proposal seeks to force Google to disclose its global gender and racial pay gaps, which is something that other large companies, including Citigroup, have done after shareholder pressure.

"Google's motto is 'Do the right thing.' So, it's time Google put its money where its mouth is," said Natasha Lamb, Arjuna Capital managing partner, in a statement via email. "There is a business imperative for tech giants to recruit and retain women, and they can't do that with lip service. Google should take a proactive approach to address the full extent of gender and racial pay inequity across the company and hiring problems at the very top."

Demonstrators are seen outside of Google's shareholder meeting this week in Mountain View, California.

According to Arjuna Capital, at least 64 companies have faced over 100 shareholder resolutions on the gender pay gap; out of 46 proposals filed at tech, finance and consumer companies, 22 have committed to disclosing their pay gaps.

Even so, as is the case with Facebook, where CEO Mark Zuckerberg has a majority of the voting power on the board, these Alphabet shareholder proposals had no chance of passing because Google's two founders, Larry Page and Sergey Brin, control a majority of the most powerful shares. Page, who last attended a shareholder meeting in 2017, did not attend this year's event.

"We believe that Alphabet has grown to a size and complexity that is unmanageable, as evidenced by numerous failures of oversight and management. I come from a country where people are imprisoned for using search terms that the Chinese government doesn’t like and considers sensitive," Sonamtso, a staffer and activist with Students for a Free Tibet, said at the meeting according to audio posted on Twitter.

The activist, who was representing the nonprofit corporate reform group SumOfUs, urged shareholders to support proposal 10 – which calls for the exploration of strategic alternatives and restructuring of Alphabet's class A and B shares – by noting the search giant's content moderation failures.

"Frontline communities don’t have the luxury of waiting for all your hypotheticals to turn into real risks for us. You have violated the trust that your customers place in you and that is bad for shareholder value. Google’s willingness to collude with the government of China sets an extremely dangerous precedent for internet freedom around the world. Alphabet has been extremely slow to restrict the spread of hateful and extremist content on its platforms," Sonamtso said.

Google has said in the past that it has not moved fast enough to clamp down on extremism and misinformation on its platforms, in particular on YouTube, where it recently unveiled a series of updates designed to filter out hate speech and white supremacist content.

Fox News reached out to Google for comment on this story.