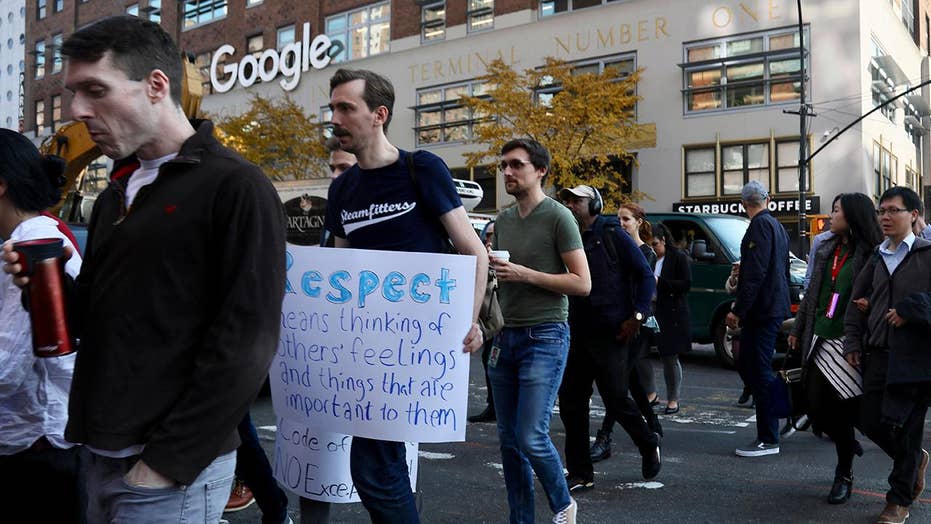 Google employees are protesting the 'workplace culture.' Jeff Paul has the story.

One of the lead organizers of #GoogleWalkout, the protest movement that's been causing a headache for the tech giant since last year and led to 20,000-plus employees walking out in defiance, has resigned after alleging the company retaliated against her.

In a post of her internal letter to colleagues published on Medium, Claire Stapleton, a Googler for more than 11 years, said her decision was based in part on the fact that she was marked for retaliation by various managers after the walkout late last year.

The walkout was in response to Google's handling of sexual harassment claims – two executives received $135 million in payouts over such claims – allegations of pay inequity and more cultural problems at the tech firm.

#IAMHERE ON FACEBOOK: HOW THOUSANDS OF USERS COMBAT HATE SPEECH ON THE SOCIAL NETWORK

"It pains me greatly to leave because I do care so much about this company, its people, and the power it wields in the world," Stapleton wrote on Medium, noting that she's also due to have another child in the fall.

"I made the choice after the heads of my department branded me with a kind of scarlet letter that makes it difficult to do my job or find another one. If I stayed, I didn't just worry that there'd be more public flogging, shunning, and stress, I expected it," she wrote.

Still, Stapleton hit back at the company in her note — implying that she was singled out in order to send a message to other Googlers who want to organize for better treatment.

"When they say 'Claire’s experience didn’t happen,'” they’re talking to everyone who thought my story sounded familiar, anyone who’s been through It in some form: pushed out or punished for speaking up, gaslit, discriminated against, isolated, harassed," she wrote.

Stapleton closed by writing that she hopes other Google employees continue to speak up and agitate for collective change.