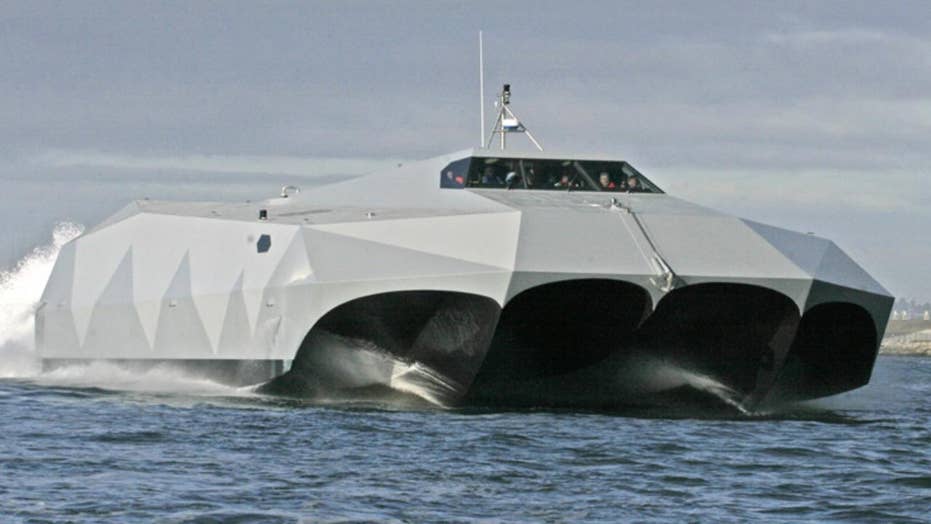 It's stealthy, ultra-fast and it can go places other crafts can't. In the nation’s vast fleet, those lucky enough to spot this craft often describe it as the most remarkable looking vessel in the Navy.

Since its debut, this mysterious vessel rapidly became dubbed a “batmobile” or a “bat boat” on water.

This week, the SEAL craft with its utterly unique look was turning heads as it traveled inland along the Potomac River. With talk of potential war in Syria dominating headlines, speculation was rampant. What was this mystery boat? Was it heading to the nation’s capital? If so, why?

So what is this mysterious, stealthy boat?

It’s the M80 Stiletto made by Knight & Carver. Stiletto was created to surpass the tough requirements of U.S. special operations forces. The Navy SEALs have been using this remarkable craft for a wide range of applications.

The Stiletto was, in fact, quietly and discreetly making its way from its home with the Navy SEALs at Little Creek Base in Virginia to National Harbor by Washington, D.C.

It has made a guest appearance at the Sea, Air and Space where the heaviest hitters in this arena converge every year. At this annual event, Navy, Marine Corps and Coast Guard all have an opportunity to see and hear more about the very latest advances for future combat.

The super-futuristic looks are not all that will surprise – this boat has another boat hidden inside.

After a stealthy approach to enemy shores, a ramp in the M80 Stiletto’s rear can lower to launch a Rigid Hull Inflatable Boat (RHIB)loaded with 12 fierce and fearless Navy SEALs for rapid insertion into enemy territory.

PODCAST: HEAR HOW NAVY SEALS TRAIN FOR THEIR EXTREME MISSIONS WITH THIS SEAL EXPERT

Unlike the very common V-hull, the Stiletto uses an M-hull approach. Its unique looks are in part due to the M-hull design.

The Stiletto’s hull design lifts the craft out of the water and reduces four key things: acoustic signature, drag, wake and how the water pounds the hull.

The benefits for military applications are substantial.

V-hulls can often deliver rough rides for the teams onboard because of water conditions. The talent and experience of a Navy SEAL is irreplaceable so innovation that can reduce the toll on their bodies, like powerful waves smacking the craft, is vital.

The hull design also delivers a platform with enhanced stability for drones to take off and land.

The design is important for speed and access. Rather than traditional material used like steel, Stiletto uses carbon fiber. Its advanced materials are lighter weight and yield less drag – two factors that can further enhance speed.

At full speed, the Stiletto at 70 miles per hour, or 60 knots and can travel about 500 miles on one tank of gas.

The draft is very shallow, approximately two and a half feet. This means the Stiletto can access places others can't. The Stiletto can travel fast in shallow waters and even shallow reefs. It is well suited for those tough environments the Navy’s larger ships can not reach such as littoral and riverine areas.

How about open ocean? When you combine an M-hull with assault craft design that can hit high speeds and rocket through waves, then you get the Stiletto. The Stiletto can even handle 13-foot waves, no problem.

PODCAST: LEARN HOW TO THINK LIKE A SEAL TEAM 6 COMMANDER

This floating "batmobile" is loaded with futuristic features. In addition to the three crew, the Stiletto can carry 12 SEALs. It is nearly 90 feet long and about 40 feet wide. Inside, it can comfortably fit a RHIB that’s about 36-feet long.

The Stiletto can also carry some drones. The top of the craft doubles as a stable flight deck for drones. Both flying, water surface and underwater drones can also be deployed through the rear. The rear door allows for rapid, easy launch and recovery of RHIBs and drones.

In a way, the Stiletto can act sort of like a mother ship to RHIB's and drones. It could help insert SEAL team members and the RHIB.

As you’d expect from larger American war vessels, this M80 Stiletto may be far smaller but still has an “electronic keel.”

For running missions like a sort of floating, futuristic command center, it can have large flat screens displaying all necessary information about the battle space. Feeds from satellites, highly detailed maps, camera feeds from SEAL teams as they conduct a mission, video from drones flying above, sensor data from stealthy underwater drones investigating threats below and more can be merged into one complete picture.

How is it being used?

Beyond delivering SEALs, the M80 Stiletto has been used for a range of purposes from clearing mines hidden out in the water through to acting as a sort of mothership providing floating command and control.

It has also been used for counter-narcotics and even NASA has enlisted the futuristic SEAL craft to help retrieve a space vehicle that splashed down in the Atlantic.

Stiletto, however, from the beginning has primarily been a testing bed for other remarkable advances that could make a difference downrange. From the start, the M80 was created as a demonstrator. The craft regularly helps accelerate and fine tune innovations to get them out to warfighters more rapidly. In this way, it acts both a sort of springboard and lily pad moving breakthroughs out to war zones faster.

In spite of all its awesomeness, thus far the Stiletto has yet to shift into becoming a core, widely used craft for operations. The unique craft has instead been playing a key role in supporting innovation for the SEAL teams and the wider military.

Most experts place the M80 cost at a maximum of $10 million. The price tag for this futuristic Navy SEAL vessel is a teeny tiny fraction of the cost of other recent new ships.