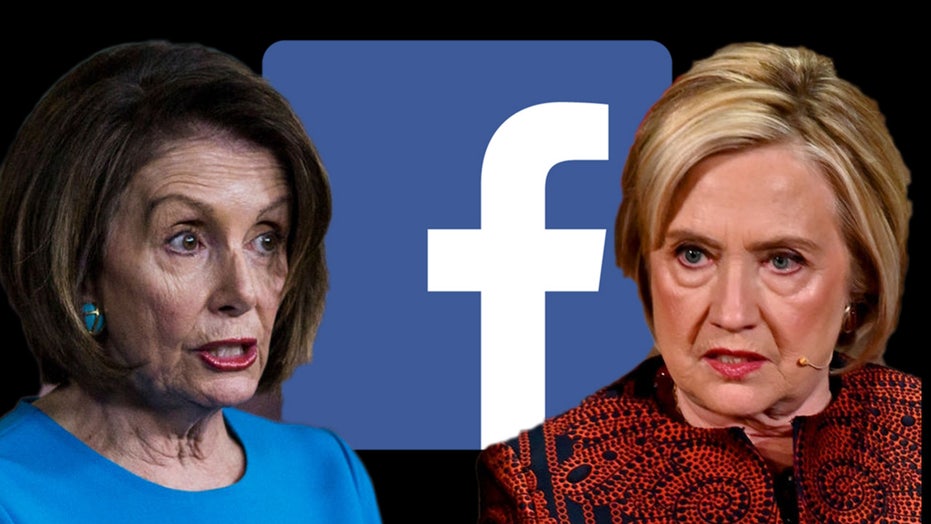 Facebook is standing firm in its refusal to take down a doctored video of House Speaker Nancy Pelosi amid a growing backlash from Democrats.

The 3-minute video, which experts say was slowed down to about 75 percent of its original speed to make Pelosi seem drunk or senile, can still be viewed on a conservative Facebook page called Politics WatchDog, where it has garnered millions of views, over 30,000 comments and 11,000 reactions since being uploaded there one week ago.

When the Mark Zuckerberg-led tech giant, which partners with dozens of fact-checking organizations worldwide, verified that the video was doctored, it heavily reduced its appearance in users' Newsfeeds. However, the company declined to remove the video.

FACEBOOK'S AVERAGE USER SPENT 38 MINUTES PER DAY ON THE PLATFORM, A DROP FROM LAST YEAR

If a user tries to share the video now, a Facebook pop-up called "Additional Reporting On This" appears that lists the results of five different fact-checking organizations, all of which rate the video as false.

Even so, the video's continued presence on the social network prompted a backlash.

Former Secretary of State Hillary Clinton slammed the social network's response during a commencement speech at Hunter College in New York on Wednesday.

"When Facebook refused to take down a fake video of Nancy Pelosi, it wasn't even a close call," Clinton told the graduates. "The video is sexist trash. And YouTube took it down but Facebook kept it up."

The former presidential candidate then suggested that a message be sent to Facebook to show opposition to the tech giant's decision, and she warned that the site would be "flooded" with "false and doctored videos" if nothing happens.

Clinton's comments came on the heels of Pelosi's statements to KQED:

“We have said all along, ‘Poor Facebook, they were unwittingly exploited by the Russians.’ I think wittingly, because right now they are putting up something that they know is false. I think it’s wrong,” she said, according to a transcript of the conversation provided by Pelosi’s office. “They’re lying to the public. . . . I think they have proven — by not taking down something they know is false — that they were willing enablers of the Russian interference in our election."

The head of NetChoice, a trade association for e-commerce, called Pelosi's comments "hyperbolic."

“Speaker Pelosi’s accusation that Facebook is a “willing enabler” of Russian interference in our elections is false and over-the-top. It's obvious that Facebook is hugely invested in ensuring that its platform won't be misused to aid election interference,” Carl Szabo, Vice President of NetChoice, told Fox News in a statement via email.

Meanwhile, the chorus of criticism continued.

Rep. Bennie Thompson, D-Miss., chairman of the House Homeland Security Committee, on Sunday called the videos "vile partisan trash" and said it is a “sad omen of what is to come in the 2020 election season.”

Damian Collins, a conservative in the United Kingdom’s Parliament and a frequent critic of Big Tech, told The Hill that Facebook's decision on the Pelosi video set a “dangerous precedent.”

Nevertheless, Facebook has continued to stand by its response.

"We think it's important for people to make their own informed choice about what to believe," Monika Bickert, Facebook's vice president for product policy and counterterrorism, told CNN. "Our job is to make sure that we are getting them accurate information and that's why we work with more than 50 fact-checking organizations around the world."

According to Marketwatch, a group of Facebook policy employees announced internally two days before the Pelosi video surfaced that the tech giant would explore the need for a new policy on manipulated media because of the potential for it to cause political disruption.

Although Facebook’s current policy on manipulation covers fake media, the tech giant told the business outlet that it is working to determine whether it needs an additional layer to address what staff called threats presented by emerging technologies, calling out “deepfakes” specifically.

The Pelosi video can still be found on random Twitter accounts, but it was removed from YouTube by Google for violating that company's community guidelines.