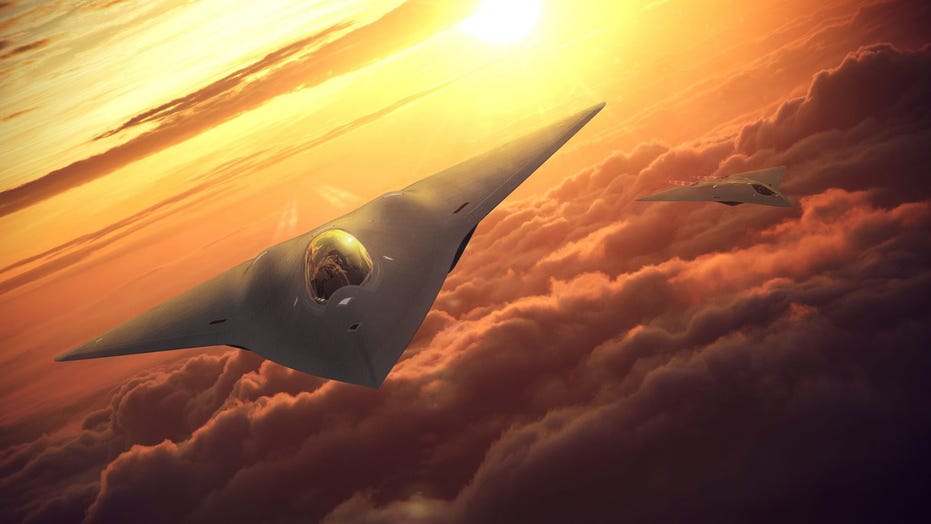 Drone fighter jets, hypersonic attack planes, artificial intelligence, lasers, electronic warfare and sensors woven into the fuselage of an aircraft are all areas of current technological exploration for the Air Force as it begins early prototyping for a new, 6th-Generation fighter jet to emerge in the 2030s and 2040s.

While the initiative, called Next Generation Air Dominance(NGAD), has been largely conceptual for years, Air Force officials say current “prototyping” and “demonstrations” are informing which technologies the service will invest in for the future.

“We have completed an analysis of alternatives and our acquisition team is working on the requirements. We are pretty deep into experimenting with hardware and software technologies that will help us control and exploit air power into the future,” Gen. James Holmes, Commander, Air Combat Command, told reporters at the Association of the Air Force Air, Space and Cyber Conference.

Part of the progress with the program, according to Air Force Acquisition Executive William Roper, is due to new methods of digital engineering.

“I have spent six months with our industry leaders and NGAD team looking at examples of applied digital engineering. I’m impressed with what they have done,” Roper.

Digital engineering, as Roper explains it, brings what could be called a two-fold advantage. It enables weapons developers to assess technologies, material configurations and aircraft models without needing to build all of them -- all while paradoxically enabling builders to “bend metal” and start building prototypes earlier than would otherwise be possible.

“The reward is more than the risk,” Roper said, speaking of the need to “try something different” and pursue newer acquisition methods which at times results in prototyping earlier in the process than the traditional process typically involves.

The Air Force Research Laboratory has been working with the acquisition community on digital engineering techniques, often explored through modeling and simulation, for many years.

“Digital engineering is another exciting area and we see the opportunity to accelerate the pace of moving things from the bench level of science and technology into a system, integrating concepts into an operational campaign model,” Tim Sakulich, Executive Lead for Implementing the Air Force S&T Strategy and Air Force Research Laboratory Lead for Materials and Manufacturing, told Warrior in an interview.

While all of these things are of course key parts of the equation, the Air Force Penetrating Counter Air/NGAD program is equally focused on information exchange itself as a defining element of future war. Such an approach, looking beyond isolated systems and weapons themselves, envisions expansive “networked” combat with war platforms operating as “nodes” in a larger warfare system of weapons and sensors working together in real time.

“This approach is one that views military operations in terms of wholistic elements of an information-shooter-effector complex. That will require a lot more going into the design of the next generation of combat aircraft than how fast and far it can fly - or what the numbers of weapons it can carry,” Ret. Lt. Gen. David Deptula, former planner of the US air attacks in Operation Desert Storm and current Dean of the The Mitchell Institute for Aerospace Studies , told Warrior Maven in an interview.

The NGAD program, which traces its history to the Air Force’s “Air Superiority 2030 Flight Plan,” envisions the possibility of a “family of capabilities.”

Holmes explained that this study began by examining more than 650 different ideas for 6th-Gen combat, which were then narrowed down to merely a few.

Directed by the Air Force Chief of Staff, service weapons developers who worked on the study have been working in Enterprise Capability Collaboration (ECCT) teams designed to pursue next-generation air superiority.

“We are moving into a future where aircraft need to be looked at as not just elements of their own, but as a system of information nodes - sensor - shooter - effectors. It is about creating an entire system of systems that is self-forming and self-healing with a greater degree of awareness than an adversary can achieve, and a much greater degree of survivability,” Deputla said.

Northrop Grumman, Lockheed Martin’s Skunk Works and Boeing’s Phantom Works are all among a handful of industry developers already working on prototype 6th Gen planes and advanced technologies - intended to align with key elements of the Air Force vision. The Air Force itself, while not yet decided upon a particular platform or fixed set of new technologies, is moving quickly beyond the conceptual realm into the active exploration of weapons, sensors, technologies and networks.

“There are maybe two to three companies that can build high-performance tactical aircraft,” Roper said.

“To become low-observable in multiple spectrums, advanced skins manage a plane’s heat distribution to foil radar, infrared, and thermal detection systems. These skins do this by distorting or eliminating heat distribution to restructure its thermal shape. They may also be able to heat up or cool down all parts of an aircraft’s surface to perfectly match the surrounding atmosphere, making it virtually undetectable,” the report, titled “The Future of Combat Aircraft: Toward a 6th Generation Aircraft,” writes.

The Air Force B-21 Raider, a new stealth bomber expected to emerge in the mid 2020s, is said by developers to incorporate a new generation of stealth - but very few details are available. (For Warrior Maven's report on the B-21 and future stealth -CLICK HERE)

Engine development is yet another area of major leap-ahead technological focus, according to the NATO Parliamentary Assembly report. Emerging “Variable Cycle Engines” introduce a third air stream into an engine, which can be controlled by the pilot, the essay explains. The new engines reportedly massively increase an aircraft’s reach, fuel efficiency and speed.

“By opening or closing the third air stream, the pilot can adjust the fuel intake of the jet engine and optimize its performance,” the report states.

Fighter-jet launched laser weapons, expected to be operational by the mid 2020s, are of course part of the planning for 6th-Generation fighters. (for Warrior Maven's Report on Fighter-Jet Launched Laser weapons - CLICK HERE)

Targeting and sensor technology, coupled with advanced guidance systems, are progressing so quickly that ships, fighter jets and land assets can no longer rely upon an existing threat envelope. Simply put, all US military systems will increasingly become more vulnerable as enemies acquire more drones, high-speed fighter jets and longer-range precision weaponry - all enabled by AI-fortified long-range sensors and targeting technology. This includes the emergence of advanced enemy fighter jets, ships, ballistic missiles and weapons such as land-based anti-ship missiles, all further necessitating the need for information and combat awareness in warfare.

Information dominance, therefore, could among other things enable a fighter jet to both launch attacks and also function as an aerial ISR node. Operating as part of a dispersed, yet interwoven combat sensor network, a fighter could transmit combat relevant data to air assets, ground-based weapons, command and control centers, Navy ships and satellites.

If a ship, ground or air commander has occasion to see or learn of an incoming attack at greater distance, he or she is obviously much better positioned to defend it. Perhaps, for instance, a medium-range ballistic missile attack is airborne, approaching land based artillery formations or a Carrier Strike Group - what might a Commander do? Should the attack be met with a ground-based interceptor, jammed with electronic warfare technology, hit with a laser or thrown off course in some other way? What if a fighter jet, configured to function as an aerial node in a larger interwoven combat network, were able to detect the approaching attack earlier in its trajectory? From beyond the horizon? Perhaps the jet might itself be positioned to attack, intercept or dismantle the approaching missile - or at least provide early warning to the weapons intended target. In this case, more “time” simply means more options to inform a commander’s decision cycle.

Referring to this emerging tactical complex as a “combat cloud,” Deptula posited that, for instance, an aircraft such as an F-35 could cue or alert an Aegis Navy Cruiser about an incoming attack, therefore offering ship-based radar, fire control and interceptor weapons a vastly improved envelope with which to take out an attack. Thus, an interconnected web of attack, targeting and information nodes can better sustain operations should one node be destroyed, and “sensor-to-shooter” time can be massively accelerated.

“For an adversary, this is a difficult concept to attack,” Deptula said.

Time is of course of the essence when it comes to air attack, air-to-air warfare and any kind of air-ground-surface coordination. Getting ahead of or inside an enemy’s “decision cycle,” is a phenomenon long-described by air warriors as completing the OODA loop - Observation, Orientation, Decision, Action - faster than an enemy, to win a dogfight. This is also one reason why hypersonic weapons are being pursued and tested with such vigor by the US and its major rivals. A weapon, drone or air asset of any kind traveling at five times the speed of sound presents a very serious “time” challenge when it comes to defending attacks.

While the notion of “manned” hypersonic flight is considered to be very far away, hypersonic weapons - to be followed by hypersonic drones - are moving closer to operational status. This greatly impacts the Air Force’s Penetrating Counter Air program because a 6th-generation aircraft might, for instance, be able to fire air-launched hypersonic weapons or launch hypersonic attack drones. It goes without saying that the faster an attack or ISR mission can operate in high-threat or enemy territory, the more its threat window can decrease. (For Warrior Maven's report on Air Force efforts to accelerate hypersonic weapons - CLICK HERE)

Interestingly, anticipated speed and range of enemy weapons and sensors continues to motivate ongoing discussion about whether “dogfighting” itself could become obsolete. Identifying, and potentially destroying an enemy aircraft before being seen is a key premise informing F-35 strategy. While the stealth fighter is engineered to dogfight, its Electro/Optical Targeting System and Distributed Aperture System are specifically designed to enable early detection of enemy fighters. The concept is, quite simply, to destroy an enemy before you yourself are seen, potentially preventing an enemy from coming close enough to require a dogfight.