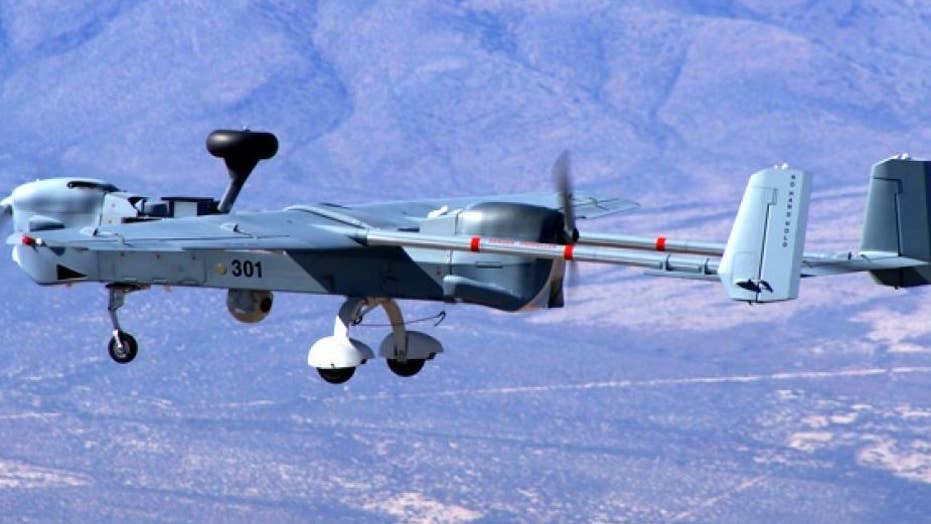 They can form swarms of hundreds of mini, precision-guided explosives, overwhelm radar or simply blanket an area with targeting sensors. They can paint or light up air, ground or sea targets for enemy fighters, missiles or armored vehicles, massively increasing warzone vulnerability. They can increasingly operate with less and less human intervention and be programed to enter enemy airspace, crossing into well-defended areas with decreased risk. Finally, perhaps of greatest significance, many of them can now fire weapons.

They are commercially available attack drones now proliferating at alarming rates around the world. Not only are they easily purchasable on the commercial market, but they are rapidly becoming more and more advanced given the lightning speed at which technology is now advancing. Video can be gathered with much higher fidelity at longer ranges, navigational systems can more accurately merge with sensors and targeting technologies and larger numbers of drones can increasingly operate in tandem - in a more coordinated fashion. Battery technology, to cite another example, is progressing so quickly that drones are increasing dwell time over targets, complicating any effort to defend against them.

The pace of technical change, and its implications for attack drones, is well captured in a 2017 Essay in an Air and Space Power Journal called “AIR MINES: Countering the Drone Threat to Aircraft.”

“Moore’s Law states that the processing power of electronic devices doubles every 18 months. By 2025 the currently widely proliferated “quadcopter” drones and their successors will have the capability to fly autonomously—at much higher altitudes, with longer flights—and be capable of complex formation maneuvers. These advances may happen soon since drones are already making strides in these areas,” the essay states. (Lt Col Leslie F. Hauck III, USAF & Dr. John P. Geis II, Colonel, USAF, Retired .. as of 2017)

This widely discussed phenomenon continues to inspire U.S. military and industry innovation in the area of counter drone weapons and technology; this spans a wide range of weapons across multiple domains. The Army’s Rapid Equipping Force has been fast-tracking electronic-warfare based weapons to “jam” enemy drones, the Navy has been tailoring shipboard sensors to enable interceptor weapons to knock out medium and low-flying drones in maritime combat and the Air Force has been working to upgrade fighter-based Active Electronically Scanned Arrays to find enemy drones at greater distances. In yet another recent example, in recent years the Army has been fast-tracking a program to Arm Strykers with counter-drone and rotary wing air defense missiles, called SHORAD (Short Range Air Defense).

All of this generates a compelling need to keep pace with technological change, surge advancement of weapons able to detect and destroy drones and pursue initiatives based upon better understanding the technical mechanisms of drones themselves. These efforts, underway by both industry and the military services, represent the pursuit of technologies engineered to mirror, replicate and even acquire the types of commercial drones available around the world. Naturally, understanding the components and functions of enemy drones are the prerequisite or precursor to the development of technologies able to track and destroy them. Simply put, before a drone can be “jammed,” “intercepted” or “destroyed” by weapons, its technical mechanisms and functionality must first be understood.

This premise informs and inspires a current Army and CACI program intended to develop the technical means to “learn,” “track,” and “understand” the newest commercially available drones. Using the term “exploitation,” weapons developers are closely analyzing the material components, sensors, video feeds and intricate electronic systems of commercial drones to lay an accurate foundation upon which these threats can be destroyed. These initiatives, as described by CACI Executive Program Director Peter Scucces, use 3-D printing, simulation and various kinds of computer analysis to discern the precise mechanisms with which the newest drones operate -- and attack.

“Replication from the component level to the high level on many systems found overseas. We provide the exploitation at the data level and RF level to understand how the device works,” Scucces told Warrior in an interview.

The Army has awarded CACI a 5-year deal up to approximately $440 million to develop these methods of analyzing commercial tech; while this is now heavily focused on drones, the process has also been applied for years to counter IEDs as well. The drone analysis is a more technically sophisticated outgrowth or byproduct of some of the previously used analyses.

“We are able to replicate every device that we see from the commercial side of the house. We are focused on understanding the electronics behind the drone,” Scucces said.

The process, described by Scucces as “reverse engineering,” uses 3-D printing to literally build drone hardware which is then analyzed by computer systems. Drone sensors, data-links and even weapons delivery systems all of course rely upon electronic mechanisms which are replicated, simulated and analyzed. The process, it seems, would need to involve a certain synergy between hardware and software using advanced computer modeling, simulation and more hands-on assessments of the equipment itself.

While many of the specific technical methods now being used to “exploit” commercial drone technologies are naturally not available for security reasons, Scucces explained, there are several general areas of discussion which continue to receive a lot of important attention when it comes to drone attacks. One of these is, of course, artificial intelligence. Increased computer automation can sift through hours of video feeds in a matter of seconds, finding the moments of relevance to commanders. In this instance, computer algorithms -- many of which are now fortified by AI -- gather, organize and analyze drone-created intelligence with little human intervention. Using computer processing speed an advanced algorithms, AI-enabled programs can compare data against vast or seemingly limitless databases to make instant determinations, organize information and solve problems -- thus avoiding the need for humans to sift through hours, or even days, of video-feed data.

This process of leveraging AI is something which could be described in the context of a certain duality; AI-informed automation can both expedite the processing of drone information from friendly drones conducting ISR, as well as potentially enable enhanced enemy drone attacks. Citing a study from the Massachusetts Institute of Technology which used a certain kind of autonomous software, the Air and Space Power essay makes the point that these kinds of AI-applications can of course help adversaries as well.

“Algorithms exist today to program a drone with “see-and-avoid” ability  In the MIT study, a graduate student in the school’s artificial intelligence lab used an open-source stereovision algorithm that enables a “drone to detect objects and build a full map of its surroundings in real time . . . at 120 frames per second.” One can infer that this algorithm can be reversed to see and not avoid,” the essay states.

In effect, the essay explains how AI-enabled sensors and targeting could enable an enemy drone to rapidly “map” or image an entire area of interest without needing to be restricted to one narrow “soda-straw” field of view. This, it goes without saying, increases the scope of enemy attack possibilities exponentially.

As an Army Futures Command program, the aim of the effort fits within the Commands central mandate to, as an Army report puts it, “define the future operating environment and understanding the necessary force structure to be successful in 2028 and beyond.”