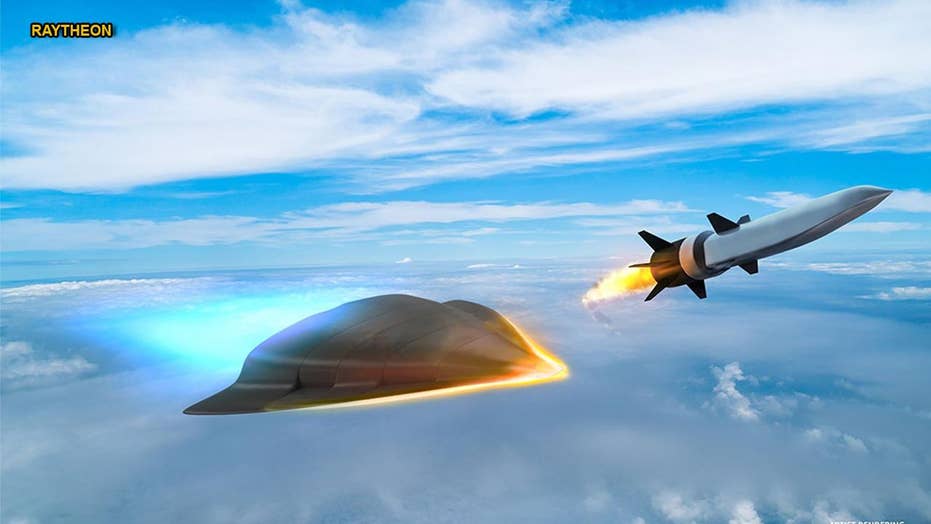 The Pentagon and industry developers are now testing a new series of hypersonic weapons prototypes. Hypersonic weapons are engineered as 'kinetic energy' strike weapons, meaning they will not use explosives but rely instead upon sheer speed and the force of impact to destroy targets.

Pentagon and industry developers are now testing a new series of hypersonic weapons prototypes as part of a large-scale effort to fast-track the weapons to service. The U.S. acceleration of the weapons, which includes air flights, ground-firing, wind-tunnels, simulation and various kinds of prototyping, is widely discussed as much needed response to Russian and Chinese progress in the area of hypersonics.

“We are flying a HAWC system…ground tests have already happened. The whole point is to simulate what you would experience in flight, so you can create the correct thermal environment. You can model and measure the heat in the vehicle and you can measure the material properties,” Dr. Thomas Bussing, vice president, Raytheon Missile Systems, told Warrior in an interview earlier this year. “You can’t test range (with a ground test), but you can measure performance, lift of the vehicle and thrust, attributes from which you can infer range.”

Air-Breathing systems regularly use a scramjet engine to generate thrust -- and propel the air vehicle across long distances to a target. While engineered to reach previously unattainable levels of propulsion, scramjet engine technology aligns with the technical configuration of existing high-power engine systems. This includes taking in a high-speed air flow, compressing the air and then igniting it with gas or some kind of propellant to generate thrust.

“Air-breathing systems can be air or ground-launched and have a rocket motor to accelerate to a cruise speed,” Bussing said.

Alongside air-breathing hypersonic weapons, the Pentagon is also developing “boost-glide” weapons which achieve speed and range by “skipping off the upper atmosphere,” Bussing said. They can be a winged glider or take on a canonical shape, making them maneuverable and high-speed with a high “lift over drag ratio.”

Boost-glide hypersonic weapons, Bussing explained, “propel a glide vehicle to a point in space where it has a certain altitude and a certain forward speed.” The speed of descent then propels the weapon toward its target. Achieving hypersonic weapons effectiveness is not without substantial challenges, according to Raytheon developers.

A Raytheon essay cites “thermodynamics” or “heat” management as essential to the effort. Objects, such as weapons, traveling at hypersonic speeds naturally generate a massive amount of heat which must be properly managed for the weapon to function. Also, specific materials designed to withstand high temperatures need to be used as well, Raytheon data states. One of the greatest challenges is what the Raytheon paper refers to as the “effects chain” -- the command and control, networking and sensor technology sufficient to achieve the requisite guidance, targeting and precision flight.

Air Force hypersonic weapons acceleration hinges upon a deliberate service acquisition strategy intended to prototype, “bend metal” and test weapons earlier in the developmental process; the concept, as articulated by Air Force Acquisition Executive Dr. William Roper, is to circumvent some of the longer time-frame and at times bureaucratic elements of the traditional acquisition process - and field reliable, tested weapons and technology much sooner than would otherwise be the case. While emphasizing this strategy, Roper seemed to anticipate or lay the foundation for what is now a very fast-moving US hypersonic weapons testing and development process.

“I am working with the team on acceleration and I am very confident that a significant acceleration is possible,” Roper said last year.

Yet another indication of Air Force and Pentagon hypersonic weapons “urgency” is visible through its established “Department of Defense High-Performance Computing Modernization Program’s Hypersonic Vehicle Simulation Institute.” The new entity is being led by Dr. Russ Cummings, an Air Force Academy professor of aeronautics.

“Hypersonics create a high degree of asymmetry, which means it takes a tremendous amount of energy to counter them. They are highly maneuverable and highly survivable,” Bussing said.

Many Hypersonic weapons are engineered as “kinetic energy” strike weapons, meaning they will not use explosives but rather rely upon sheer speed and the force of impact to destroy targets, developers explain. A super high-speed drone or ISR platform would better enable air vehicles to rapidly enter and exit enemy territory and send back relevant imagery without being detected by enemy radar or shot down.

Although potential defensive uses for hypersonic weapons, interceptors or vehicles are by no means beyond the realm of consideration, the principle effort at the moment is to engineer offensive weapons able to quickly destroy enemy targets at great distances. Air Force Scientists explain that speed of sound can vary, depending upon the altitude; at the ground level it is roughly 1,100 feet per second. Accordingly, if a weapon is engineered with 2,000 seconds worth of fuel – it can travel up to 2,000 miles to a target, former Air Force Chief Scientist Gregory Zacharias told Warrior in a previous interview.

This Hypersonic weapons acceleration is taking place within a high-threat global environment. Both Russia and China have been visibly conducting Hypersonic weapons tests, leading some to raise the question as to whether the US could be behind key rivals in this area.

A Popular Mechanics report from earlier this year cites Chinese State Media as having announced a successful test of a new “wave-rider” Hypersonic vehicle. “The Hypersonic vehicle that detached from the booster rocket flew for 400 seconds, achieving a maximum speed of Mach 5.5 to 6 (4,200 to 4,600 miles an hour) and reaching an altitude of 100,000 feet,” the report says.

Also, a report in The Diplomat earlier this year outlines Chinese DF-17 Hypersonic missile tests in November of last year.

Regarding the Russians, Bussing referred to Putin’s claim that Russia has hypersonic weapons that are able to fly from a fighter jet. Some of Putin’s theatrics have included “live action test footage with computer graphics in a series of videos,” as described in an essay in The National Interest by William Giannetti.

“The first video featured the hefty MiG-31 Foxhound, lofting a four-ton hypersonic Kinzhal (Dagger) from its underside into a U.S. Ticonderoga-class warship. Then came the Avangard (Vanguard) hypersonic glide vehicle—a curious weapon with potentially dangerous implications. The Avangard will likely be helped into the atmosphere by a giant rocket like the RS-28 Sarmat intercontinental ballistic missile (ICBM),” Giannetti writes.