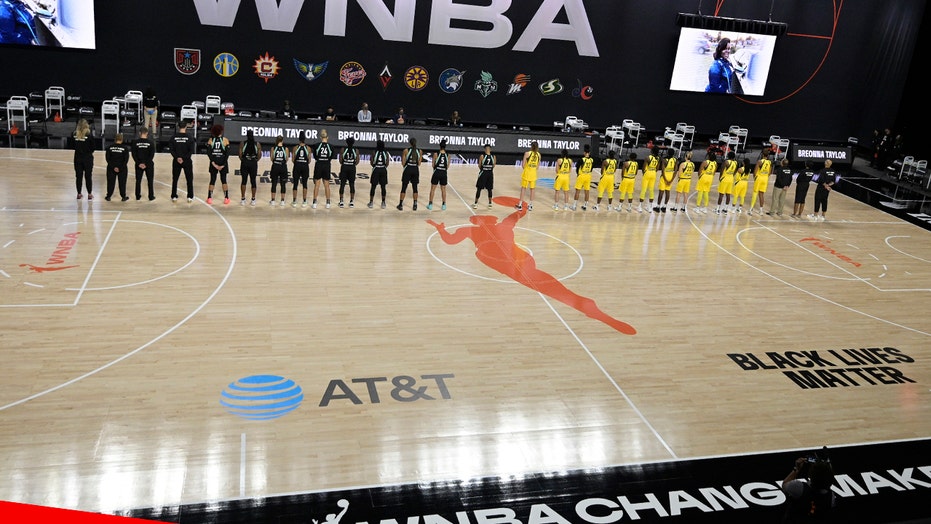 Members of the New York Liberty and Seattle Storm walked off the court during the national anthem on Saturday ahead of the WNBA’s season opener in what players said will be a season dedicated to honoring Breonna Taylor and other victims of social injustice.

Players from both teams walked back to their respective locker rooms during the national anthem and then held a brief moment of silence for Taylor, a 26-year-old Black woman who was fatally shot in March when Louisville police were conducting a no-knock warrant at her home related to a narcotics investigation.

“We are dedicating this season to Breonna Taylor, an outstanding EMT who was murdered over 130 days ago in her home,” Liberty’s Layshia Clarendon said before the game.

“We are also dedicating this season to [the] ‘Say Her Name” campaign, a campaign committed to saying the names and fighting for justice for Black women -- Black women who are so often forgotten in this fight for justice, who do not have people marching in the streets for them,” Clarendon continued.

“We will be a voice for the voiceless.”

None of the officers involved in the shooting that led to Taylor’s death have been arrested or charged. The Kentucky Attorney General’s Office is still investigating.

The WNBA protest comes just days after several MLB teams knelt down in unity in a moment honoring the Black Lives Matter movement before the national anthem was played. Some players also took a knee during the anthem.