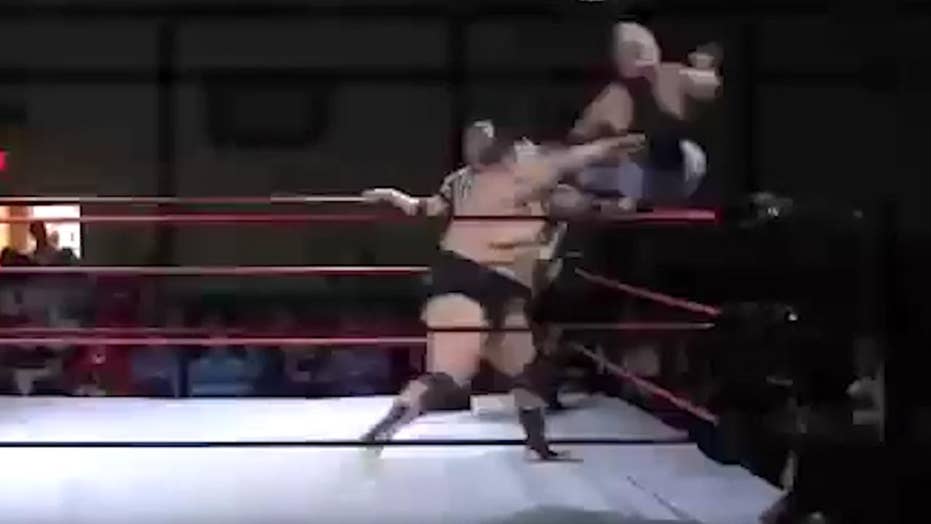 Wrestler violently launches opponent out of the ring

Raw video: Ace Romero hurls Anthony Gaines out of the ring over a dozen feet and into the crowd during an Empire State Wrestling's Summer of Sleaze event near Buffalo.

In the end, size really does seem to have some distinct advantages.

Wrestler Anthony Gaines, who describes himself as “Buffalo’s Best-Kept Secret,” got the shock of his life at the Empire State Wrestling “Summer of Sleaze” event in North Tonawanda, N.Y., this past week while facing a colossus opponent.

During the 15-minute match, Maine wrestler Ace Romero, who weighs more than 300 pounds, launched Gaines, listed at 5-foot-11 and 207 pounds, over the top rope and out of the ring about 14 feet up an aisle, crashing into a cameraman, Syracuse.com reported.

The shocking video went viral, as many online were wowed and terrified by the brutal WTF move.

Retired pro wrestler Lex Luger tweeted, “This is one of the craziest bumps I have ever seen at a local wrestling event here in beautiful Buffalo this past weekend !!!”

Pro wrestler and promoter The DRAW said on Twitter: “This is nuts!!! How is this ever physically possible!?”

The greatest irony is that 28-year-old Gaines still won, retaining his title of the ESW Interstate Champion by defeating Romero.