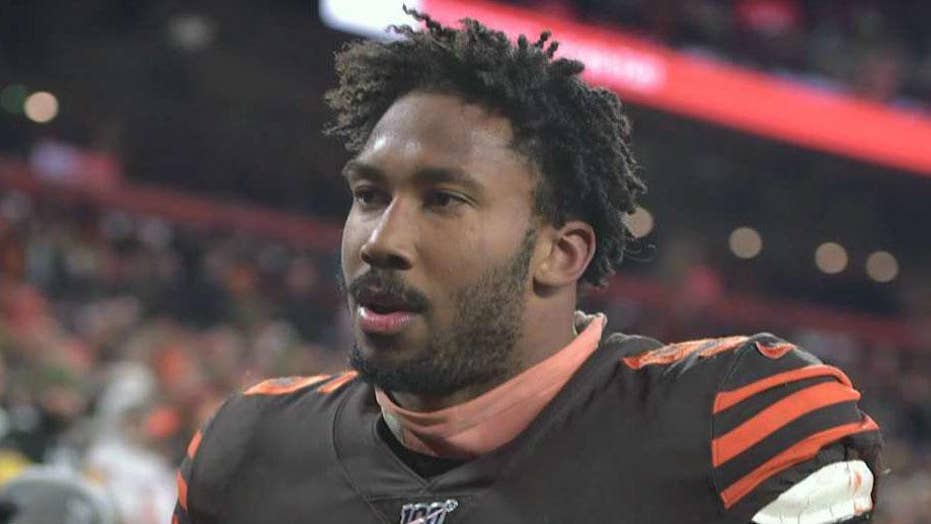 Pittsburgh Steelers quarterback Mason Rudolph on Wednesday lamented his role in a controversial brawl last week with Cleveland Browns defensive end Myles Garrett — but added that he thought he was hit late.

In a prepared statement to the media, Rudolph said he fell short of the expectation that comes with playing for the Steelers and admitted he put teammate Maurkice Pouncey in a bad spot for their response to Garrett and the brawl that ensued Thursday night at the end of their game.

PITTSBURGH STEELERS' MIKE TOMLIN DISCUSSES BRAWL: 'IT WAS UGLY FOR THE GAME OF FOOTBALL'

Rudolph was tackled by Garrett after he dumped a short pass off. The quarterback was then seen grabbing at Garrett’s helmet and the skirmish escalated from there. The two got into one another’s face and Garrett ripped Rudolph’s helmet off and hit him with it. Garrett was then pushed to the ground and Pouncey was seen kicking and punching the lineman’s head.

The quarterback admitted Wednesday he should have “kept his cool in that situation.” But he said he was frustrated by what he thought was a late hit from Garrett and already having two of his teammates out with injuries on helmet-to-helmet hits — one of which left Diontae Johnson bleeding from the ear.

“The way I saw it, on the final play of the game with the game in hand the way it was, it had been, we had already lost two of our players to targeting penalties from the game,” he said. “As I released the ball, I took a late shot. Did not agree with the way he took me to the ground and my natural reaction was to get him from off on top of me. And again, I should have done a better job of handling that situation.”

Rudolph added: “I have no ill will toward Myles Garrett, great respect for his ability as a player and I know if Myles could go back he would handle the situation differently. As for my involvement last week, there is no acceptable excuse. The bottom line is I should have done a better job keeping my composure in that situation. It falls short of what I believe it means to be a Pittsburgh Steeler and a member of the NFL. I understand there's going to be a few questions but I think it's in the best interest of our team, my teammates, our coaches to kind of move forward from this and move things on to the Cincinnati Bengals and keep on trying to stack some wins here.”

Rudolph denied using any derogatory language that may have caused the situation to escalate.

He is expected to be fined for his role in the brawl.

Garrett received an indefinite suspension, Pouncey received three games and Browns defensive lineman Larry Ogunjobi was suspended one game for pushing Rudolph to the ground in the aftermath.