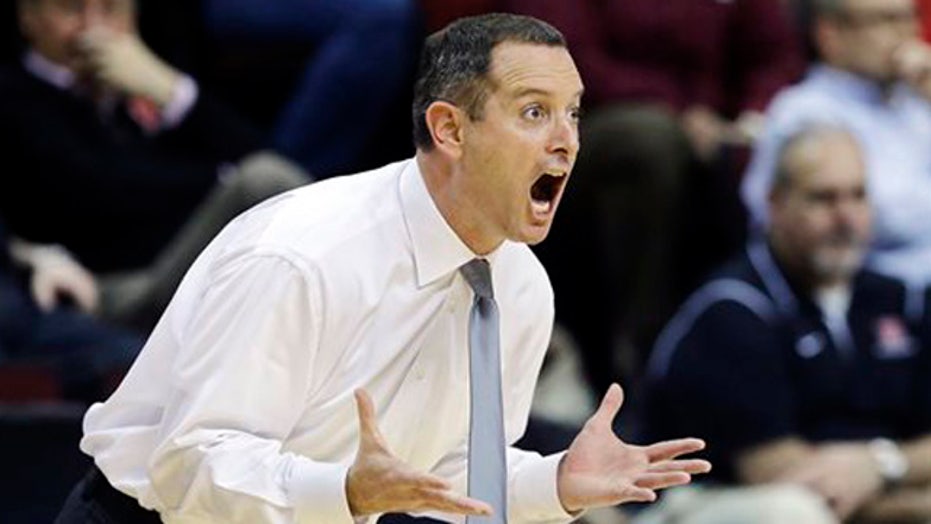 Rutgers University fired men’s basketball coach Mike Rice on Wednesday after video of him abusing players that had led to his suspension in December went public, sparking national outrage.

The New Jersey school's athletic department announced Rice's termination on its Twitter page, a day after ESPN aired video in which Rice shoves players, hurls basketballs at them and uses profane language and gay slurs.

“Based upon recently revealed information and a review of previously discovered issues, Rutgers has terminated the contract of Mike Rice,” the posting read.

"He cannot continue to coach at Rutgers University.”

The state school previously punished Rice in December, suspending him for three games and fining him $50,000, but at that time the video did not go public. In the wake of ESPN's blockbuster report, Athletic director Tim Pernetti said Tuesday that the school was considering canning the 44-year-old coach.

“I am responsible for the decision to attempt a rehabilitation of Coach Rice,” Pernetti said in a statement on Wednesday. “Dismissal and corrective action were debated in December and I thought it was in the best interest of everyone to rehabilitate, but I was wrong. Moving forward, I will work to regain the trust of the Rutgers community.”

Reached outside his home by ABC's New York affiliate, Rice was contrite.

"As  I stated three months ago, after I watched the video, how deeply regrettable those actions ... I also stated I was going to try to work on changing, and I think I've accomplished a lot of that," Rice said Wednesday before the official announcement of his firing. "Can't say anything right now, except, 'I'm sorry.' There will never be a time where I'm going to use any of that as an excuse, or will there be any excuse. I've let so many people down — my players, my administration, Rutgers University, the fans, my family who's sitting in their house, huddled around because of the fact their father was an embarrassment to them."

The videotape prompted scores of outraged social media comments, as well as criticism from Gov. Chris Christie and NBA star LeBron James. The head of the New Jersey Assembly also called for Rice to be fired.

A national search to replace Rice, who reportedly earned an average of $650,000 annually when he signed a five-year deal in 2010, will now take place after three relatively unsuccessful seasons at the Big East school.

Pernetti received a copy of the video in November and then hired independent investigators to analyze the tape.

“Yesterday, I personally reviewed the video evidence, which shows a chronic and pervasive pattern of disturbing behavior,” the statement released on Wednesday read. “I have now reached the conclusion that Coach Rice cannot continue to serve effectively in a position that demands the highest levels of leadership, responsibility and public accountability. He cannot continue to coach at Rutgers University.”

Christie said he “completely” supported the decision to terminate Rice.

“It was the right and necessary action to take in light of the conduct displayed on the videotape,” Christie’s statement read. “Parents entrust their sons to the Rutgers Athletic Department and the men's basketball program at an incredibly formative period of their lives. The way these young men were treated by the head coach was completely unacceptable and violates the trust those parents put in Rutgers University. All of the student-athletes entrusted to our care deserve much better.

“As we move on from this incident, I am very optimistic that Rutgers will select a new head coach who not only puts a winning team on the court, but will make everyone proud of the example he sets every day for the young men in his charge.”

The video reportedly surfaced thanks to Eric Murdock, a former director of player development with the Rutgers basketball program. Murdock showed footage of incidents involving Rice to Pernetti last year, claiming Rice engaged in such actions as early as 2010. Murdock, in turn, was fired last July and has accused the school of dismissing him because he informed Pernetti of Rice's actions. He is now planning to sue the school for wrongful termination.

Despite Rice’s firing, New Jersey Assemblyman Reed Gusciora told FoxNews.com an investigation into the “decision-making process” behind the initial move not to fire the coach in December is still needed.

“It’s deeply troubling,” Gusciora said Wednesday. “You expect a coach to be tough with his players and somewhat forceful, but to actually throw basketballs at their heads and kick them and call them names and slurs based on sexual orientation — I don’t think that’s representative of a university.”

Gusciora, who said Tuesday he would seek to add a provision to the state's budget to defund Rice’s salary, said the entire controversy has brought a black eye to the university and New Jersey as a whole.

“It actually demeans us down to ‘Jersey Shore’ level,” the Democrat said in reference to MTV’s hit television show. “It’s something that would be connected to Snooki, not to a university in the Big East. One would think that student athletes deserve better and have a coach who knows how to motivate them without abusing them.”

Gusciora said some of the gay slurs uttered by Rice were particularly offensive given the case of Tyler Clementi, a Rutgers student who committed suicide after a roommate used a webcam to spy on him with another man.

“The fact is there are gay players out there,” he said. “We have to be more sensitive.”

New Jersey Sen. Frank Lautenberg and New Jersey Rep. Rush Holt, authors of the “Tyler Clementi Higher Education Anti-Harassment Act,” renewed their call for Congress to pass the bill, saying it would directly apply to the type of behavior exhibited by Rice.

“This incident shows us that physical and emotional abuse of college students by faculty is occurring right under our noses,” the lawmakers said in a statement. “Our Tyler Clementi Higher Education Anti-Harrassment Act would require colleges to implement policies strictly prohibiting faculty from bullying students and this incident highlights the need for Congress to support our bill.  Rutgers made the right decision by finally firing Mike Rice for his deplorable actions and homophobic slurs, but more needs to be done to make sure this type of abuse is stopped and a strong code of conduct protecting students from such harassment is enforced.  We will keep working to stop bullying and ensure that no parent has to worry that his or her child is being abused by their leaders or peers when they are on a college campus.”

The bill, which was recently reintroduced to Congress, would require colleges and universities to institute anti-harassment policies and provide funding for a competitive grant program to support schools seeking to establish or expand programs to prevent harassment of students.