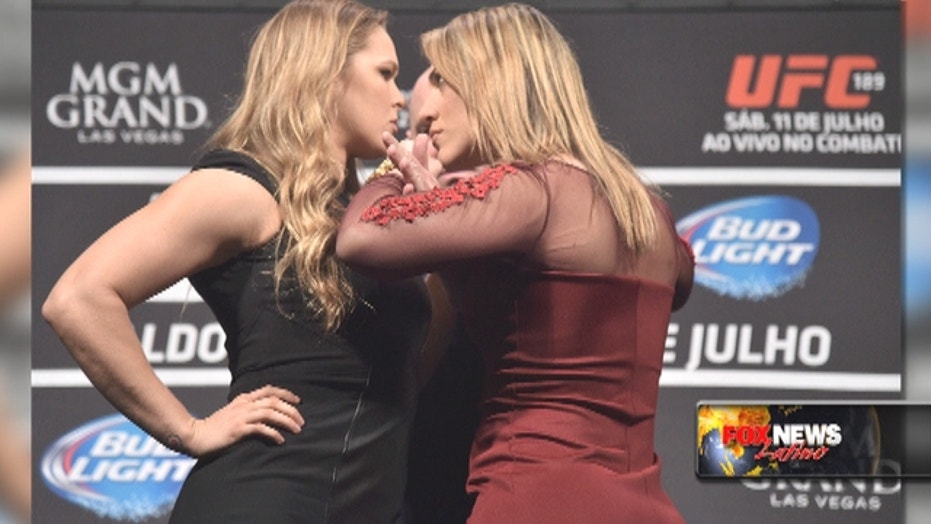 For Ronda Rousey, a recent winner of two ESPY awards, one for 'Best Female Athlete', and the other for 'Best Fighter,’ this Saturday’s fight against Bethe Correia is personal.

Los Angeles – For Ronda Rousey, a recent winner of two ESPY awards, one for 'Best Female Athlete', and the other for 'Best Fighter,’ this Saturday’s fight against Bethe Correia is personal.

Correia said during a recent interview that she hoped Rousey doesn't commit suicide after their match.

"I will give her a rematch if she doesn't cry too much," Bethe said months ago. "She can't take the pressure. I will give her the chance to get the belt back. Please, don't kill yourself, don't commit suicide, because I will give you the rematch."

Suicide is a particularly sensitive topic for Rousey, who wrote about the pain she experienced after her father committed suicide, when she was 8 years old, in her memoir "My Fight/Your Fight.”

“Making such tasteless remarks about suicide, when [Correia] knows how it has affected me in my past," Rousey said during a press conference a few days before traveling to Brazil to defend her title against Correia.

“That’s when I know an example must be made. I need all the other girls coming up to look at what happened to her and decide it’s an example not worth following,” Rousey said.

Correia publicly apologized for the comment but Rousey says it was too little too late. “Revenge is a dish best served cold,” adding, "a methodical enemy is the worst kind to have."

Correia has a lot to be fearful of. She is going up against a fighter who has been called the toughest female athlete on the planet. Rousey is undefeated, and is famous for her signature armbar move, a joint lock where the elbow is hyper-extended in order to cause pain or injury, forcing her opponent to submit.

Although Correia has the advantage of fighting in her home turf of Brazil, Rousey says she’s not intimidated.

"I grew up as a kid, every tournament, every World Cup, every important tournament in my entire life happened when I didn’t have the home court advantage, it’s something I’m accustomed to," she said.

Besides training, Rousey has also been busy acting. She recently appeared in ‘Entourage,' and 'Furious 7,' and will also be seen in director Peter Bergs upcoming movie, 'Mile 22.’

“I want to be the first athlete ever to simultaneously have a successful athletic and acting career,” she told reporters.

She's juggling a lot before her big fight. But she says multitasking keeps her focused.

“It keeps me from getting burned out,” she said, adding, “I'm a white belt in acting. When I don’t have goals or something to strive for, it’s very bad for me."

It is clear that Ronda Rousey is already a bona fide super star to mixed martial arts fans around the world.

But in 2015 her career exploded onto the mainstream with a movie career and a WrestleMania appearance with 'The Rock.’

“At first, what drove me was to keep from being evicted,” she said, “and now what drives me is to leave a legacy.”

That legacy, she hopes, is to retire undefeated.

Another task on the half-Venezuelan’s bucket list is to learn Spanish. She’s enlisted the best coach, her mother, to teach her during a planned trip to Costa Rica next summer.

“She will refuse to speak to me in English, so hopefully I can learn,” she said. “And when I go to a family reunion, I can actually talk to people”

At 28 years old, Rousey is on top of her game, and confident she will win the bout. But the fighter said she also had to fight her way into believing in herself.