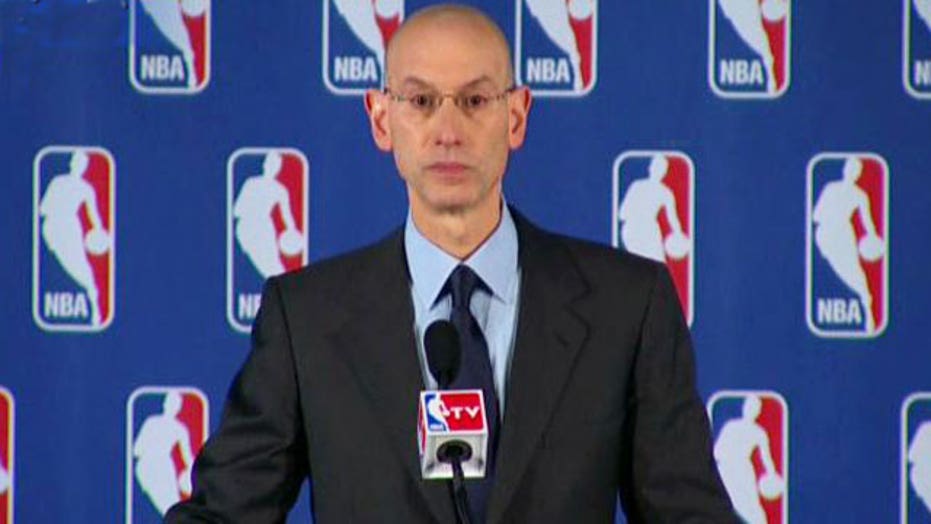 A potential boycott of Tuesday night's NBA playoff games by players was averted after the NBA threw the book at Los Angeles Clippers owner Donald Sterling, banning him for life, fining him $2.5 million and raising the possibility of a forced sale of the team over racist remarks he made to an ex-girlfriend that surfaced on a tape recording over the weekend.

NBA Commissioner Adam Silver made the announcement at a New York press conference moments after Sterling told Fox News that he was not interested in selling the team. When reached after the press conference by Fox News' Jim Gray, Sterling declined to comment.

The news of the lifetime ban, the first handed out by the NBA for an incident not related to gambling or drug use, came hours before the Clippers were to play the Golden State Warriors in Game 5 of the Western Conference quarterfinals. A heavy police and security presence was reported around the Staples Center in downtown Los Angeles in anticipation of anti-Sterling protests. Arena workers covered up signage of sponsors who had distanced themselves from the Clippers and the NBA amid the controversy.

Clippers head coach Doc Rivers, who is black, said Silver "made the decision that really was the right one that had to be made ... I don't think this is something that we rejoice in or anything like that. I told the players about the decision, and I think they were just happy there was a resolution and that it's over, at least the start of it. I think we're all in a better place because of this."

Speculation had grown in recent days that Rivers, in his first season as Clippers head coach, would not have returned to the team next year if Sterling was still the Clippers' owner.

"I have given it zero thought," Rivers said when asked about his future. "But Adam's decision makes it easier."

Chris Paul, the Clippers' All-Star point guard and the president of the players' union, issued a brief statement before game time.

"In response to today's ruling by the NBA and Commissioner Adam Silver, my teammates and I are in agreement with his decision," Paul said. "We appreciate the strong leadership from Commissioner Silver and he has our full support."

Warriors coach Mark Jackson, who had called for fans to not attend the game prior to Silver's ruling, said fans should come to the game, and added that boycotting the game was "a real option" if Silver's ruling had not been deemed strong enough by the NBA player's union.

The San Jose Mercury News reported that all 15 Warriors players would have walked off the court once the referee threw the ball into the air to start the game, and after they had taken part in warm-ups, pregame introductions, and the national anthem.

"It wasn't just about the Clippers," Mason told Yahoo Sports. "All teams would have been prepared if that message wasn't what we wanted to do as players. …Today when I landed, I talked to [Golden State Warriors center] Jermaine O'Neal and he pretty much said their team would be on board. I was reaching out to the Clippers. I felt really strongly about this.

"All of our players felt that boycotting the game tonight would have been a step for us as players."

Silver, who succeeded David Stern as NBA commissioner in February, said the league interviewed Sterling during its investigation. He said NBA investigators determined that the voice heard on the audio tape obtained by TMZ was Sterling's and called the comments "deeply offensive" and vowed to “do everything in my power” to force a sale of the team, which could be worth more than $500 million.

“The hateful opinions voiced by that man are those of Mr. Sterling. The views expressed by Mr. Sterling are deeply offensive and harmful. That they came from an NBA owner only heightens the damage and my personal outrage,” Silver said. “I am banning Mr. Sterling for life from any association with the Clippers association or the NBA. Mr. Sterling may not attend any NBA games or practices, he may not be present at any Clippers facility, and he may not participate in any business or decisions involving the team.”

Silver said a forensic expert confirmed tape made by Sterling’s mistress, V. Stiviano, was not altered. In the tape, which was released by TMZ on Saturday, Sterling is heard telling Stiviano, who is of African-American and Mexican descent, not to associate publicly with “black people,” especially at Clippers games. The tape was released shortly after she posted a picture of herself with Lakers Hall of Famer Magic Johnson on Instagram.

As part of his punishment, Sterling will be barred from attending Clipper games and practices, as well as from conducting Clippers business or having any say in basketball operations. Silver said the $2.5 million fine was the harshest possible under the NBA's constitution. Silver said Sterling's representatives found out about the ruling just before the press conference and  stressed that the ban is independent of the effort to compel Sterling to sell the team.

Mark Cuban, the owner of the Dallas Mavericks, tweeted, "I agree 100% with Commissioner Silvers findings and the actions taken against Donald Sterling."

The Portland Trail Blazers and San Antonio Spurs have worn black socks in their games as a show of support, while the Miami Heat mimicked the Clippers warm-up statement in their playoff game against Charlotte on Monday night.

"Like I've said before, there's no room in this game for an owner like that," Heat star LeBron James said. "For us, as basketball players, we're all brothers. We're competing against each other and all of us want to win, but in the end, we all have to stick together."

Kobe Bryant and TNT analyst Kenny Smith are among the many to join James in calling for Sterling's ouster and Jordan took a rare public stance on a high-profile issue when he said he was "disgusted that a fellow team owner could hold such sickening and offensive views."

"We're more than basketball players," Wizards guard Garrett Temple said. "We're human beings, first and foremost, and when you hear something like that, it's very unfortunate that whoever that is talking feels that way, and I don't think there's any place in this game or in the world, for that matter, for thoughts like that."