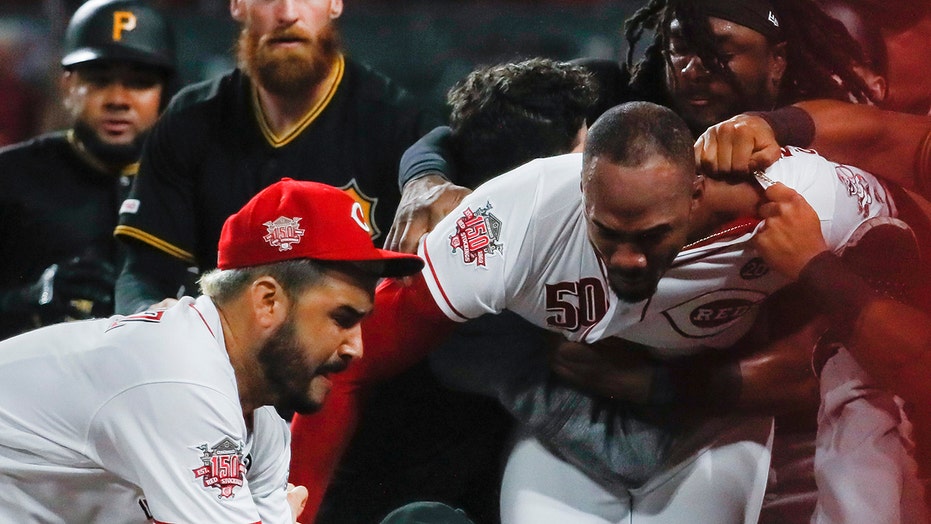 Cincinnati Reds pitcher Amir Garrett was the main player of a bench-clearing brawl Tuesday night in a game against the Pittsburgh Pirates.

In the top of the ninth inning and with the Reds down eight runs, Garrett was being talked to by his coach and his catcher when he decided to jolt toward the Pirates dugout and seemingly challenge all of the players to a fight.

After Garrett's apparent challenge, Pirates players then began to talk back at him as he was on the mound and things escalated from there.

Garrett, a 6-foot-6 reliever, tossed his glove and began to swing at several Pirates players. Garrett’s teammate Yasiel Puig – who was traded to the Cleveland Indians in the middle of the game – was among those involved in the brawl. Both players were ejected.

YASIEL PUIG, TRADED TO INDIANS, GETS IN BRAWL IN FINAL GAME WITH REDS

Photos of the brawl went viral on social media. Some of the pictures showed Garrett standing tall amid a crowd of Pirates players ready to take him down.

Garrett came into the game after Reds reliever Jared Hughes hit Pirates outfielder Starling Marte earlier in the eighth inning, which some thought was retaliation for an incident earlier in the game when Derek Dietrich got a ball thrown near his head.

“It seems like every time Amir gets on the field, he's looking to fight, not looking to play baseball,” Pirates pitcher Joe Musgrove said.

After the game, Garrett acknowledged that he was in the wrong and that violence should not be a part of baseball.

“I don't condone what I did. It's not in the game for something like that to happen,” Garrett said after the game. “Sometimes, you let emotions get the best of you. I don't condone that. I don't like for kids to see that in the baseball environment. Baseball is fun. The violence shouldn't be in there. At the end of the day, it about protecting your teammates, protecting yourself. Emotions got the best of me.”