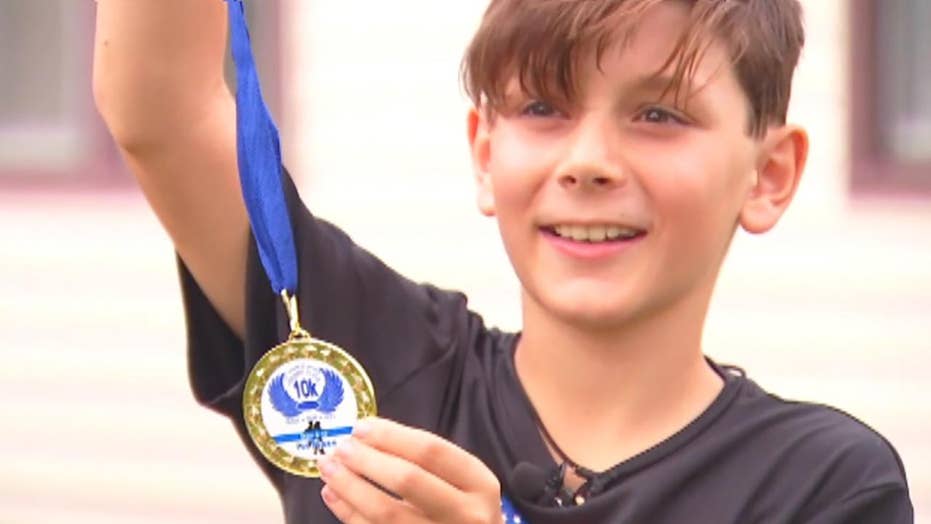 He took a wrong turn, but he still ended up a winner.

A 9-year-old boy wound up winning a 10K race in Minnesota last month after he missed a turn on a separate 5K race and ended up on the much longer course.

At one point during the run, a woman told him to keep going when he approached the 5K turn, he told the St. Cloud Times — so he did, despite his confusion.

Kade Lovell poses with his medal after unexpectedly winning a 10K after taking a wrong turn during another race. (FOX9)

When he didn't cross the finish line of the 5K, his mother, Heather Lovell, said she thought her son was having an off day. But when he didn't show up, her concerns grew and she started driving along the 3.11-mile route looking for him.

IAAF DOING AWAY WITH THE TERM 'FASTEST LOSER': REPORT

"I thought maybe he is having a bad race. It happens. No big deal. Then these other kids coming running by... I was like, ‘He should be in front of them.’ Then I thought maybe he's hurt, maybe he got lost, maybe worse could happen...who knows," she told FOX9.

High school sprinter blows past the competition running a 9.98 in the 100-meter dash

Heather Lovell said she was "bawling" when no one else saw her son, as she asked anyone she could find if they had seen her son. She was eventually able to track him down after a spectator called her brother-in-law, who was in the 10K race, to let him know there was a "little kid who was running really well" in the 10K.

When Kade's mother found him, he was all alone and she told FOX9 she thought he had come in last place in the 10K.

But race organizers told Kade's mother he finished in first place. She thought they meant in his age group, but he was actually first place overall. He finished in just over 48 minutes — a minute faster than the 40-year-old woman who ended up in second place.

"I accidentally won it, and they've been practicing for a long time. I just was really surprised I did that," Kade told FOX9.

Kade's mother said the 9-year-old has been running since he was 18-months-old. "He pretty much popped out running," she said. Then, at the age of 6, he started running with a cross country club. He currently practices at least three times a week, running two to six miles at a time.

“I like wasting my energy and stuff, and sprinting and just running," Kade told FOX9.

After his accidental win, Kade ran another 5K race sponsored by the Jacob Wetterling Resource Center — which he also won. He is now practicing with a special running coach and has already competed in the Junior Olympics with plans to compete again in Wisconsin this year.

"I'm glad the way it turned out. I couldn't have asked for a better way for it to turn out, from me being scared to being excited and he did well," his mother told FOX9.