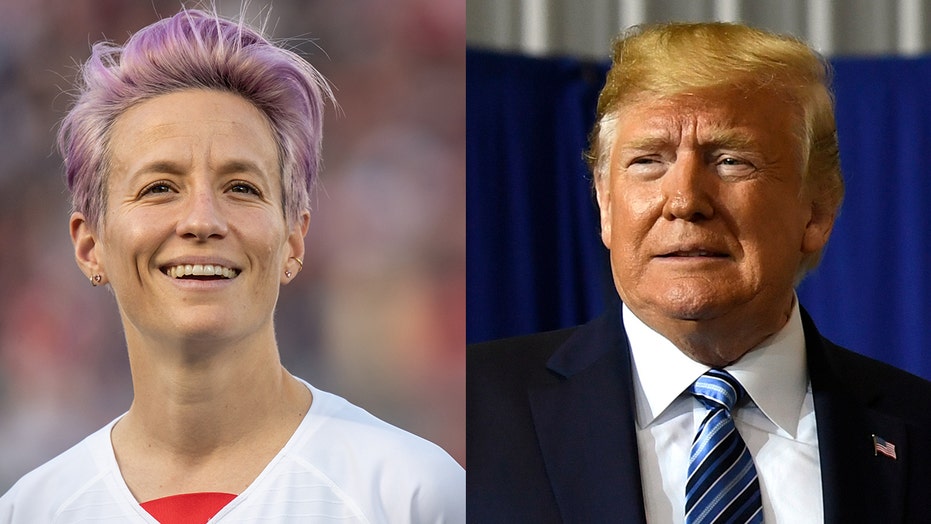 Celebrations become political battleground; Raymond Arroyo has this week's edition of Seen and Unseen on 'The Ingraham Angle.'

U.S. women's soccer star Megan Rapinoe said she thinks her father voted for President Trump in 2016 — a political choice that provides a stark contrast in her family, as the World Cup-winning forward is nearly as well known for launching broadsides at the Trump administration as she is for launching soccer balls into the back of the net.

Rapinoe, 34, said in an interview published Saturday that she questions how her parents can support her and still watch Fox News (which heavily covered the leadup to the World Cup, the tournament itself and the aftermath).

"I’m very similar to how they are, even though I think my dad voted for Trump and I’ll say, ‘I don’t get it. How are you simultaneously as proud as punch of me, and watching Fox News all the time, [who are doing] takedowns of your daughter?’" she told the Guardian. "That’s why I’m like, ‘You guys need to go to therapy.’”

Megan Rapinoe — a prominent critic of the White House — believes her dad voted for President Trump in 2016. (Getty/AP)

She said there have "been some major blow-ups" with her family, but noted she's very close to them.

"It’s not like, ‘Ugh, I’m from a conservative town and I never talk to them anymore.’ I talk to my parents all the time, every day," she said. "And I feel like I have seen progress and growth. I would love it if people understood you should never say racist things and be O.K. with gay people, or whatever it is. But, obviously, it doesn’t happen that quickly.”

Rapinoe came out as gay in 2012 and often uses her platform as one of the prominent faces of the U.S. women's soccer team for political activism, includes hitting back at the Trump administration.

Despite visiting the White House in 2012, when Barack Obama was president, Rapinoe — who has kneeled during "The Star-Spangled Banner" before soccer games and otherwise often protests by not placing her hand over her heart during the national anthem — said she would never visit the White House as long as Trump is president. Before her team's FIFA Women's World Cup win in July, Rapinoe said she's "not going to the f---ing White House," and questioned whether the women's squad would even be invited.

Trump in June tweeted he's a "big fan of the American Team, and Women's Soccer, but Megan should WIN first before she TALKS! Finish the job!"

"We haven’t yet invited Megan or the team, but I am now inviting the TEAM, win or lose. Megan should never disrespect our Country, the White House, or our Flag, especially since so much has been done for her & the team. Be proud of the Flag that you wear. The USA is doing GREAT!" Trump added.

In a later interview with CNN's Anderson Cooper, Rapinoe said she doesn't “think anyone on the team has any interest in lending the platform that we’ve worked hard to build and the things that we fight for and the way that we live our life."

“I don’t think we want that to be co-opted or corrupted by this administration...There are so many other people that I would rather talk to and have meaningful conversations that can really affect change in Washington than going to the White House," Rapinoe said.

Rapinoe added: "We need to have a reckoning with the message that you have and what you're saying about 'Make America Great Again.' I think you are harking back to an era that was not great for everyone."