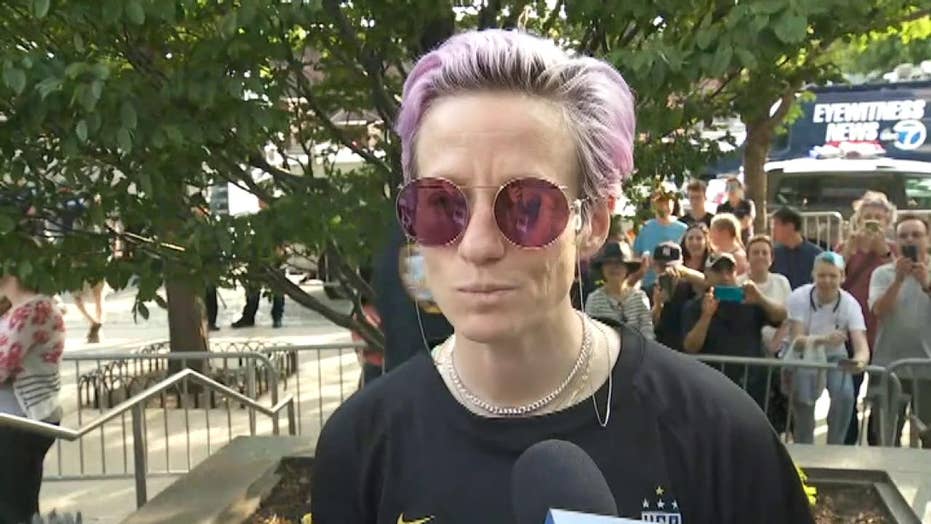 The team has been formally invited by Senator Schumer to visit Congress, Rapinoe reacted.&nbsp;

Earlier, Monday, during remarks on the Senate floor, Schumer invited the team to the Senate to celebrate the historic victory in the 2019 Women’s World Cup. He also called on Senate Majority Leader Mitch McConnell to bring legislation up for a vote that would ensure all women earn equal pay.

“And, while today we celebrate their victory, we also recognize that these women, these athletes, have challenges and they make us really think about the future of women’s sports,” Schumer said on Monday. “They make us grapple with the deep unfairness in how female athletes are treated, and paid, compared to their male counterparts.”

Reacting to Schumer’s call for equal pay, Rapinoe said, “That's great. I love that. Interested to see what McConnell does. Thank you, Chuck Schumer, for inviting us out. We are very happy to accept your invitation to come.”

McConnell did not immediately respond to Fox News’ request for comment.

On Sunday, President Trump unequivocally congratulated the United States women's soccer team after its repeat World Cup win -- putting aside, at least for the moment, the firestorm surrounding Rapinoe's vow never to visit the White House.

Asked by reporters later in the day whether men and women World Cup soccer teams should make the same money -- which Rapinoe has demanded -- Trump responded, “I would like to see that, but you’ve also got to look at numbers... you have to look at who’s taking in what” and “see how they're performing.”

“I don't know what those numbers are,” Trump added. “And, you have to see year-round how are they all drawing -- what is the attendance for women’s soccer outside of World Cup, but I would like to see it.”

Rapinoe, the pink-haired team captain who emerged with the Golden Ball as top player and the Golden Boot as top scorer, has been an outspoken opponent of what she's described as systemic gender inequality in the United States. Rapinoe previously knelt during the national anthem prior to rules changes that barred the practice.

“I'm not going to the f------ White House,” Rapinoe said in a widely publicized magazine interview in June. “No f------ way will we be invited to the White House. [Trump] tries to avoid inviting a team that might decline. Or, like he did when the [Golden State] Warriors turned him down, he’ll claim they hadn’t been invited in the first place.”

Rapinoe has largely stood by her comments in recent weeks, except for the explicit language she used. On Saturday, Rapinoe said that she believed that “not many, if any” of her teammates would visit the White House if they won the final against the Netherlands.

Rapinoe told reporters on Monday, “We've said publicly, I've said that I think most the team, if not everybody, I think everybody is with me. We don't want to go to the White House, so I figure that's why the invitation hasn't come.”

Rapinoe’s teammate Alex Morgan weighed in on the invitation, telling reporters on Monday, “We have a lot to talk about within the team.”

She added that “she is sure that anything” that the team could do to “raise our voice and use their platform for, we will do so.”

Fox News’ Courtney Crawford, Gregg Re, Chad Pergram and The Associated Press contributed to this report.