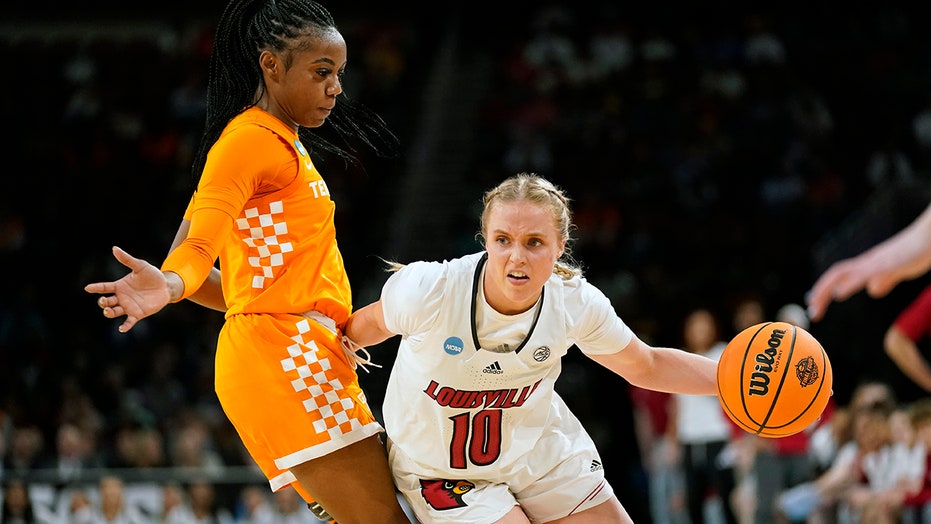 Hailey Van Lith and Emily Engstler knew Louisville had allowed far too many leads to slip away in the fourth quarter this season, including the disheartening loss to Miami in the quarterfinals of the ACC Tournament.

Van Lith and Engstler refused to let it happen again in the NCAA Tournament.

Van Lith poured in 23 points with six assists and was solid at the foul stripe down the stretch, while Emily Engstler had 20 points and 10 rebounds to help the top-seeded Cardinals withstand Tennessee's frantic comeback for a 76-64 victory on Saturday that sent coach Jeff Walz's bunch back to the Elite Eight for the fourth straight time.

Louisville's Hailey Van Lith heads to the basket as Tennessee's Jordan Walker defends in the Sweet 16 round of the NCAA women's tournament Saturday, March 26, 2022, in Wichita, Kansas. (AP Photo/Jeff Roberson)

Kianna Smith also had 12 points for the Cardinals (28-4), whose 15-point lead was whittled to two in the fourth quarter before they pulled away to set up a date with third-seeded Michigan on Monday.

"We just kept reminding each other that as long as we get stops and rebounds, we’ll be up no matter what," Van Lith said afterward, "no matter if we score or not. We were able to execute that. All of our players stepped up and got rebounds and made good plays on defense and we were able to pull away."

The Cardinals have become one of the nation's dominant women's programs under Walz – much like the Lady Vols were for so many years under Pat Summitt – but they are still chasing their first national championship.

"It's been a really long journey," said Engstler, a transfer from Syracuse, "and I just think sometimes you have a feeling. I feel really good about this team and I think we're going to get there."

Rae Burrell led No. 4 seed Tennessee (25-9) with 22 points, but she didn't get a whole lot of help from the rest of her team, which had 18 turnovers and was 5 of 21 from beyond the arc. Jordan Walker had 10 points but also had five turnovers.

"Louisville is tough. They're so tough on both ends of the court," Lady Vols coach Kellie Harper said. "We needed to play with a few less mistakes at both ends of the court. But we don't have any quit in us. We cut it to two, we gave ourselves a chance in the fourth quarter. Love 'em for that."

The Cardinals asserted control midway through the first, taking advantage off too many unforced errors by the Lady Vols. Kaiya Wynn's turnover led to Van Lith's easy transition layup, then Wynn missed a pair of foul shots and Burrell missed an open 3-pointer from the corner in the waning minutes that allowed Louisville to stretch the lead.

The trouble for Tennessee really began in the second quarter.

The Lady Vols turned the ball over on four of their first six possessions, often resulting in easy baskets at the other end, and the Cardinals seized on the momentum swing by slapping on a full-court press, too. The lead ballooned to 27-13 before Harper called a timeout to rescue her team trapped in the backcourt.

The biggest reason Tennessee hung around, down 38-29 at the half, was decent defense of its own.

The Lady Vols finally got going on offense out of the break, with Burrell and Tess Darby as the catalysts. Darby was scoreless in the first half but hit three 3s in the third quarter, and Burrell also had nine points over that stretch, including a 3 that barely beat the buzzer to get the Lady Vols within 55-50 heading to the fourth.

The turnovers finally did them in, though.

Tennessee had closed within 55-53 on Burrell's 3-point play to begin the fourth quarter but coughed it up on three straight trips down floor. Engstler scored after the first turnover, Smith drained a 3-pointer after the second and Louisville quickly stretched the lead again, building a big enough cushion to coast into the regional finals.

"We're going to have a heavyweight fight," Walz said. "It's going to be a fun day Monday. It's nice to still be playing."

Tennessee: Fell to 0-3 against Louisville in the NCAA Tournament, including a loss five years ago in the Sweet 16. And while the Lady Vols are making strides under Harper in their return to prominence, they still haven't reached the Elite Eight since 2016 and their last Final Four appearance came in 2008.

Louisville: Reached the 70-point mark with 2:18 to go and that was a bad sign for the Lady Vols, who were 24-2 when holding opponents under that total. The Cardinals struggled from the field most of the way – Van Lith was just 7 of 21 from the field and 0 for 5 from beyond the arc.

The center-hung video board inside INTRUST Bank Arena went dark about the same time the game tipped off, preventing both fans and coaches from seeing any replays. It finally came back on midway through the first quarter.