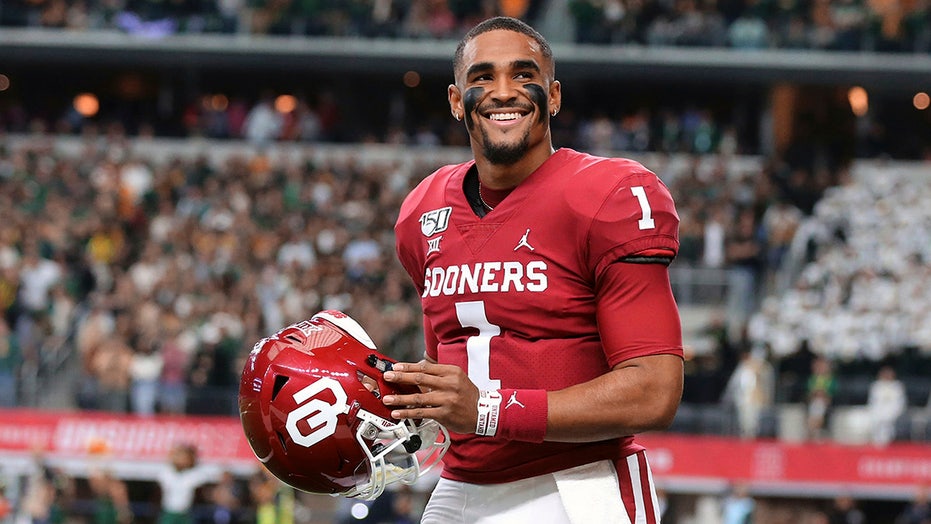 Jalen Hurts was presented a helmet at the Senior Bowl providing a snapshot of his college career, an OU on the right side and his old Alabama No. 2 on the left.

Now, the quarterback who led two elite programs to the College Football Playoffs is trying to prove himself again, as an NFL prospect, back in the state where he began his college career.

Hurts, who wore an Oklahoma-only helmet in practice Tuesday, officially began his audition for NFL teams this week with practices and meetings ahead of Saturday’s Senior Bowl. His biggest selling point: “I win.”

Indeed, last season’s Heisman Trophy runner-up did a lot of winning for both Oklahoma and the Crimson Tide, putting up big numbers both passing and rushing. But questions remain about his passing accuracy and consistency, leading to an uncertain draft status.

LSU Heisman winner Joe Burrow is the likely No. 1 overall pick by the Cincinnati Bengals, whose staff is coaching Hurts and the South team. Tua Tagovailoa, who replaced Hurts as the starter, is also regarded as a likely first-round draft pick despite recovering from hip surgery.

Then there’s the 6-foot-1, 218-pound Hurts, who has a stellar resume but still some questions.

“I don’t want to get into comparisons,” he said Tuesday before the teams’ first practices. “That’s kind of like the kiss of death. I try to be the best version of myself. Go out there and try to win, try to lead my guys, build relationships with my guys. Win ballgames.”

Hurts went 26-2 as a starter for the Tide and was Southeastern Conference player of the year as a freshman. Then he was benched at halftime of the national championship game against Georgia, with Tagovailoa leading the comeback victory and ultimately winning the starting job for the 2018 season.

Hurts stuck it out instead of leaving to preserve a second year of eligibility and ultimately departed for Oklahoma while ranking in the top three among Alabama quarterbacks for career rushing yards, touchdowns, total offense and passing TDs.

He led a comeback of his own for the Crimson Tide after Tagovailoa was injured in the SEC championship game, also against Georgia. Then he transferred to play for Lincoln Riley and the Sooners and delivered easily his best season.

“He’s been successful everywhere he’s been,” Bengals coach Zac Taylor said. “He really is a little bit like an NFL quarterback in the sense that he had to go quickly and pick up an offense and really prove himself as a leader in a new program in a short period of time, which he did. He had a great year.”

“Those are things that we get a chance now to see in person. Get to know the kid a little bit more. ... He certainly had a great college career. He’s put himself in a good position.”

But also an uncertain one. Senior Bowl executive director Jim Nagy was initially skeptical about Hurts’ ability to play quarterback in the NFL.

“Jalen’s come a long, long way. He really has,” the former scout said. “People asked me about Jalen when I took the job and I said maybe if he comes to the Senior Bowl in a couple of years it might be as another position player. He’s blown that out. He’s come so far.”

Hurts, meanwhile, still conveys the same unflappable confidence as always. Determined to prove critics wrong, he's sporting more than a chip on his shoulder. It is, he said, “a boulder.”

“I don’t think there’s any experience that I’d go back and exchange or change,” Hurts said. “I think everything’s happened for a reason. It’s all happened how it’s supposed to. I think I’m stronger, wiser, better man, better player, leader, better everything.”