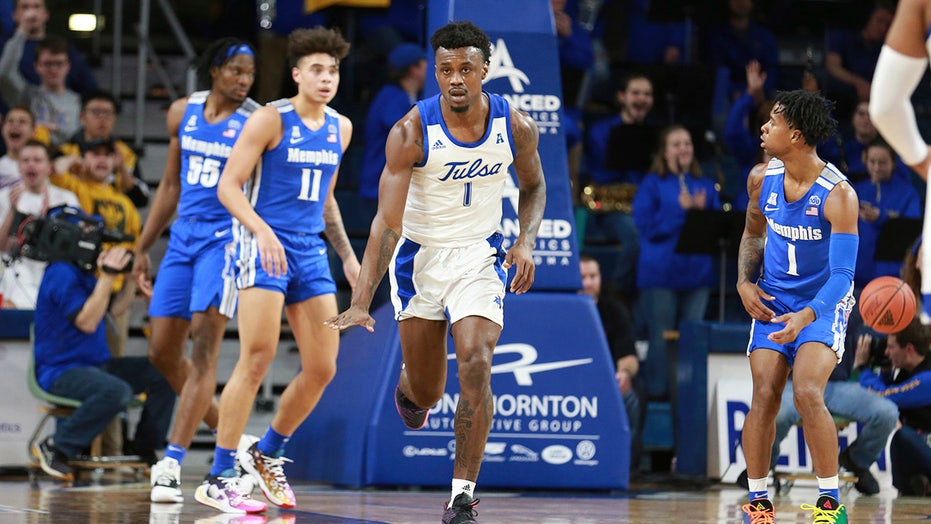 Things started out poorly for Memphis and just snowballed from there.

Jeriah Horne scored 21 points to help lead Tulsa to a surprisingly dominant 80-40 win over No. 20 Memphis on Wednesday night.

The 40-point margin of victory is the largest-ever for Tulsa against a ranked opponent.

Martins Igbanu had 11 points and six rebounds, and Brandon Rachal, the reigning American Athletic Conference’s Player of the Week, also had 11 points for Tulsa (13-6, 5-1 American). The Golden Hurricane has now won four straight games following a stretch where they went 1-3.

“We were making shots, we had good looks and we shared the ball,” said Tulsa coach Frank Haith. “Jeriah was outstanding. Brandon didn’t have one of his great nights but I thought he was really good. And I think Martins is coming around. That helps us when we have an inside presence and it opens up a lot of things for other guys when he’s a factor in the paint area.”

Freshman Precious Achiuwa scored 10 points for Memphis (14-4, 3-2), which shot a season-low 28.8% from the floor. Achiuwa had eight points in the first seven-plus minutes, but wasn’t much of a factor after that, although he did have a team-high six rebounds.

“We knew that they were going to play matchup zone,” said Tigers coach Penny Hardaway. “When it didn’t go well with what we were trying to do, guys didn’t get tougher on the defensive end and that’s what you have to do until you figure it out. We never figured it out offensively and we gave in on the defensive end.”

Memphis entered the day leading the entire nation in field goal percentage defense, holding opponents to an average of 35% shooting, but the Golden Hurricane shot 50 percent (27 of 54).

That marked a season-high for both Tulsa and for Memphis to have allowed.

“We let our offense dictate the defense and didn’t play any defense today,” Hardaway said. “We gave up 80 points. That’s pretty embarrassing. I saw the energy way down, I’m not sure why. I just kept trying to urge guys in the huddle to get the energy up.”

Tulsa took a 23-point lead into halftime and just kept building on it well into the second half. After Horne’s 3-pointer with 9:05 left, the Golden Hurricane led 67-32 and the Tulsa crowd of 4,668 chanted, “Overrated,” referring to Memphis. Fans then stormed the floor after the final buzzer.

“We just played great at both ends of the court,” Haith said. “We probably caught Memphis on not one of their best nights. Proud of our kids, how we fought, how we competed. There’s not an area of the game that I didn’t think we did well.”

Memphis: The Tigers came in connecting on 33.8 % of their 3-point shots, but had a difficult time from beyond the arc. After going 0-for-10 on 3-point attempts in the first half, Memphis made 2 of 11 in the second to finish at 9.5%. That marked the lowest percentage of the season for the Tigers.

Tulsa: The Golden Hurricane got off to a strong start, with Isaiah Hill’s 3-pointer capping off a 17-4 run to give Tulsa a commanding 26-10 lead with 8:35 remaining in the opening half. They were able to maintain, and then build on, that advantage throughout the first half, taking a 40-17 edge into halftime. Tulsa continued its dominance into the second half.

Tulsa’s biggest previous win against a ranked opponent was when the No. 15-ranked Golden Hurricane defeated No. 10 LSU 84-56 (26-point margin) on Dec. 22, 1952. … Memphis entered the day ranking second in the nation in blocked shots, averaging 7.0 per contest, but had just one. That was their lowest total of the season. … Tulsa had the edge in rebounds, 37-35, although the Tigers had a 21-19 advantage in the second half. … Memphis committed 20 turnovers, which Tulsa scored 24 points off of, while Tulsa had 11 that turned into just four points for the Tigers.

“We’re going to respond, for sure,” Hardaway said. “I’m sure they’re trying to figure out how we lost by 40, but it’s easy to see we lost in all the toughness categories. No matter how hard you coach a young team, they still got to go out and execute it and today, it just seemed like they were taking Tulsa for granted. You cannot do that on this level.”

Memphis: The Tigers return home for just the second time in January, hosting SMU on Saturday.

Tulsa: The Golden Hurricane travel to Storrs to take on Connecticut in an early 11 a.m. start on Sunday.