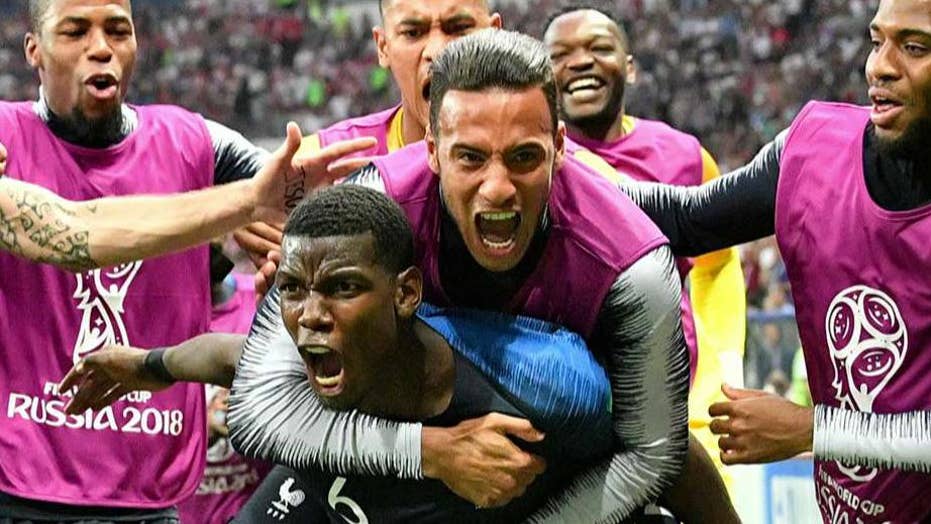 France celebrates a victory in the 2018 World Cup, beating Croatia.

France clinched its second FIFA World Cup title after beating Croatia 4-2 in the finals on Sunday, as Fox News reported — in the highest-scoring final since 1966.

The win marked the second time in 20 years that France has won.

"We're happy. It took 20 years ... It's the pride of the nation. It unites everyone. It federates," Frederique Pourquet said as she and her friend left the Champs-Elysees, the world-famous avenue in Paris.

Fans in the U.S. even enjoyed the win, as bars overflowed with crowds, captured, of course, virally on social media, and public big-screen TVs showed the triumph to overjoyed fans.

In Paris, fans flooded the Champs-Elysees by the tens of thousands to celebrate with cheers, stomping and song in an explosion of joy.

"It represents enormous things," said Goffrey Hamsik, dressed in a hat resembling a cockerel — the French national symbol — and a shirt with the No. 10 for Kylian Mpappe, the 19-year-old breakout star who hails from the Paris suburb of Bondy.

"We've had lots of problems in France these past years," he said, recalling a string of terror attacks. "This is good for the morale and unites us."

People celebrating on the Champs-Elysees in Paris after France won the World Cup on Sunday. (AP Photo/Francois Mori)

Unity was a key word for partiers, and the celebrations were mirrored across the country.

The win "shows that the French people are consolidated and the work of all France," said Omar Bzi.

Hajar Maghnaoui, of Asnieres, north of Paris, said: "It's a way to bring the French people together, and also the world."

Mahmoud Bourassi had some sobering thoughts about France's run to the title and the festivities it has sparked.

Bourassi runs a youth center in Bondy — Mbappe's home that was among those scarred by riots in 2005 that exposed the fissures of France that have yet to heal — and he says he knows the teenage star of the tournament.

France's head coach Didier Deschamps thrown into the air by his players as they celebrated. (AP Photo/Francisco Seco)

"All this euphoria and effervescence, it's positive but it's emotional and ephemeral," he said ahead of France's win. Bourassi said sports is a "catalyst to bring people and nations together."

But, he added, it must be built on.

"What we're seeing is magic, exceptional. But what are we going to do with it tomorrow?"