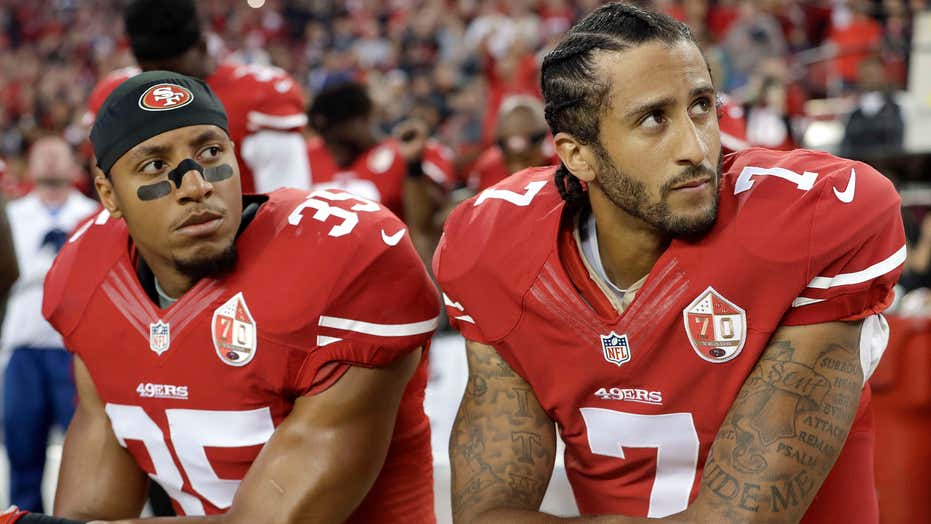 Eric Reid piled onto the criticism of the NFL and Commissioner Roger Goodell on Monday, a day after his former teammate Colin Kaepernick blasted the league for its recent social justice push.

Reid, a current free-agent defensive back, was the first teammate of Kaepernick’s to kneel during the national anthem in 2016 when the two played for the San Francisco 49ers.

“What the @NFL is doing is half-hearted at best. @nflcommish has gotten comfortable saying he 'was wrong' as if his mere acknowledgement reconciles his admitted wrongdoing. He hasn’t even called Colin to apologize, let alone reconcile, proving this is only PR for the current business climate,” he wrote.

“As such, Roger Goodell uses video of Colin courageously kneeling to legitimize their disingenuous PR while simultaneously perpetuating systemic oppression, that the video he’s using fights against, by continuing to rob Colin of his career. It’s diabolical.”

Reid’s criticism came after Kaepernick slammed the league and scrutinized teams who have passed over signing the former Carolina Panthers safety after a solid 2019.

“While the NFL runs propaganda about how they care about Black Life, they are still actively blackballing Eric Reid (@E_Reid35) for fighting for the Black community. Eric set 2 franchise records last year, and is one of the best defensive players in the league,” Kaepernick wrote.

Upon Kaepernick’s departure and elongated free agency, he and Reid filed a grievance against the NFL alleging that owners were conspiring to keep them out of the league because of their protests. The lawsuit was eventually settled and Reid would later sign with the Panthers.

Goodell had apologized earlier in the year for not listening to Kaepernick on why he was protesting. The league has allowed players to wear decals of the names of victims of racism and add phrases like "End Racism" to the end zones to promote awareness of social injustices.