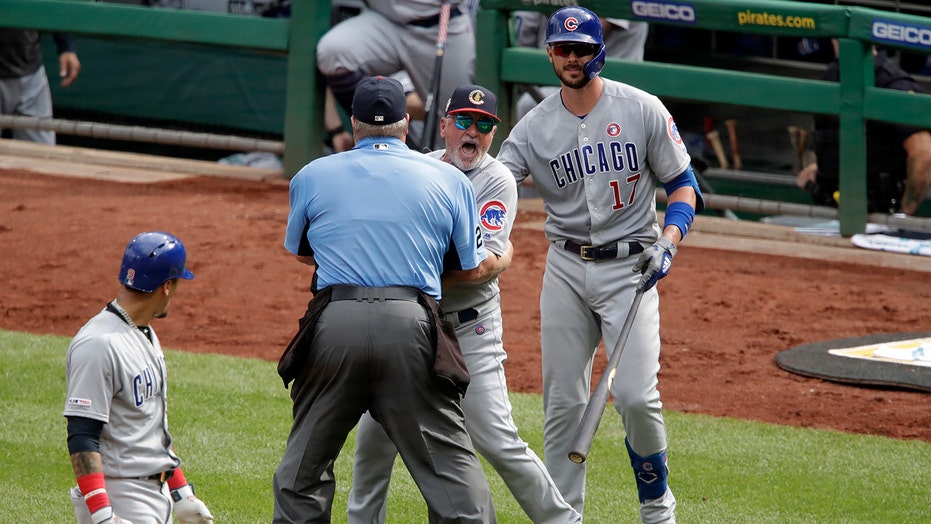 Chicago Cubs manager Joe Maddon had enough with the Pittsburgh Pirates throwing inside to All-Star shortstop Javy Baez during a game Thursday and jetted out of the dugout screaming at the home plate umpire and opposing manager.

In the fourth inning, Baez was batting when Pirates pitcher Jordan Lyles threw a couple of balls that Baez had to get out of the way of. It was enough for Maddon to yell at umpire Joe West and Pirates manager Clint Hurdle, who was standing on the top step of his dugout.

Maddon had to be restrained by Cubs star third baseman Kris Bryant – who was in the on-deck circle.

“Pent up frustration is one thing, but when guys keep throwing at their head, that's another thing, too,” Maddon said after the game.

Later in the game, Cubs infielder David Bote was drilled in the head with the bases loaded. He remained in the game, but Maddon later expressed his annoyance with the Pirates pitchers’ lack of command.

“When you can't command the ball in, which was evidenced by David getting hit in the head [it's out of hand],” he said. “I'm just saying, they continue along that tack, they got a nice bunch of players right there. They're not going to like it.”

Hurdle explained to reporters he understood that nobody likes getting the ball up and in, but Lyles had only hit one batter all season.

The Cubs ended up getting the last laugh, winning 11-3.