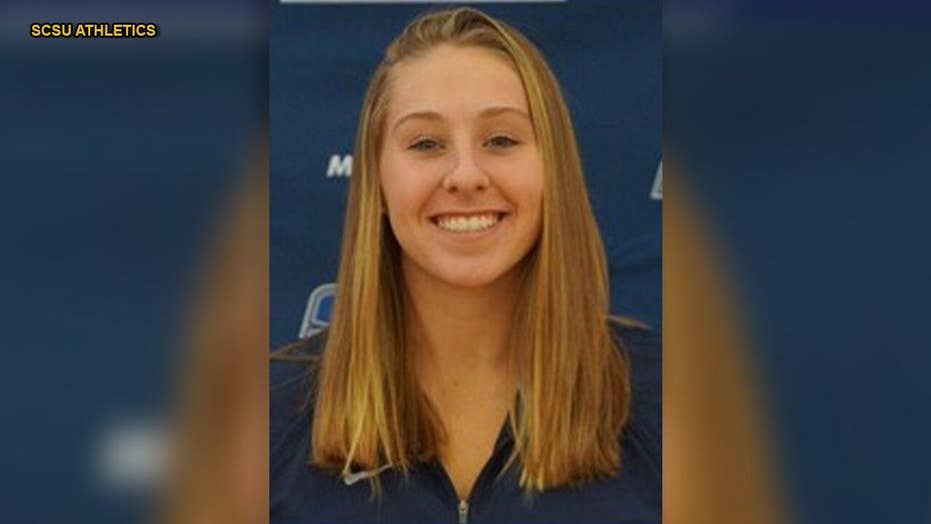 Melanie Coleman, a 20-year-old gymnast at Southern Connecticut State University, died Sunday after a 'freak' training accident. The athlete and youth gymnastics instructor reportedly suffered the injury after slipping off a gymnastics bar.

A 20-year-old gymnast at Southern Connecticut State University died Sunday after she suffered an injury during a training “accident,” the university said.

Thomas Alberti, Coleman’s former coach, told the Hartford Courant she suffered the injury after slipping off a gymnastics bar. He called it “an unexpected accident with a tragic result.”

Coleman followed in the footsteps of her two sisters as both a gymnast and aspiring nurse, the Connecticut Post reported. (SCSU Athletics)

While neither Alberti nor the school elaborated on the injury, the Connecticut Post reported that Coleman suffered damage to her spinal cord while practicing on the bars.

It was described as a “tragic freak accident,” on a GoFundMe page set up for Coleman.

The school confirmed Coleman’s death in an email obtained by local media.

“Her coaches and professors describe Melanie as a special young woman, who excelled both in the classroom and in the gym,” Joe Bertolino, the university’s president, wrote in the email. “Our deepest sympathies are extended to her family and friends on this tragic loss.”

Coleman received honors as a leader in the sport and in the classroom, the university said. Last year, she was recognized by both USA Gymnastics and the Women’s Collegiate Gymnastics Association as an All-America Scholar-Athlete and Scholastic All-American, respectively.

“We are heartbroken and stunned by Melanie's passing,” head coach Mary Fredericks said. “She was an incredibly hard worker and a sweet-spirited young woman.”

When not competing or studying, Coleman volunteered as a youth instructor at New Era Gymnastics in Hamden, the university said.

She gave every ounce of energy and that makes a coach want to give everything.

Coleman’s discipline, dedication and love of gymnastics led the university to have her name inscribed on a banner in the school gym, along with the names of her two sisters, the Courant reported.

"She gave every ounce of energy and that makes a coach want to give everything,'' Alberti told the paper.