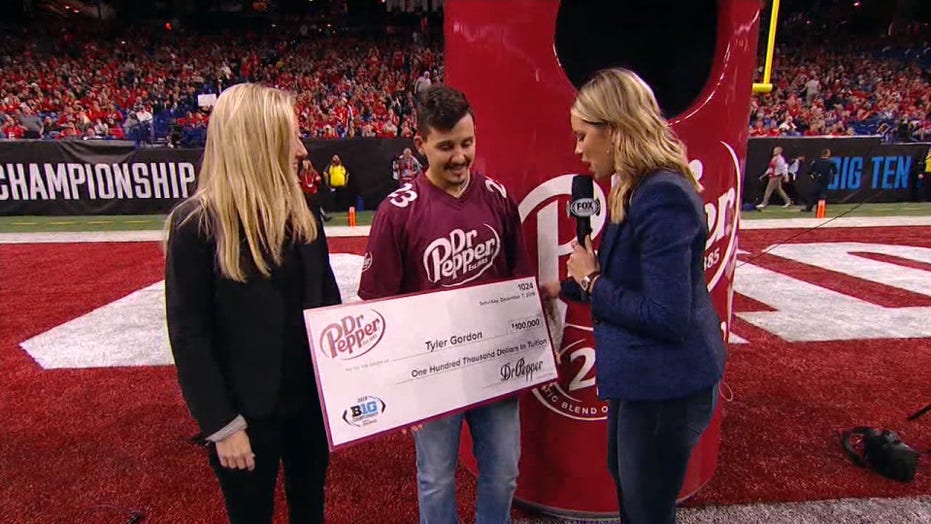 A college student used his halftime cash prize win as an opportunity to share his deep-rooted faith.

On Saturday night, Tyler Gordon won the Dr. Pepper grand prize of $100,000 during the halftime tuition giveaway contest of the Big Ten Championship, before the Ohio State Buckeyes rallied in the second half to defeat the Wisconsin Badgers 34-21.

"The opportunity to share my faith in front of millions was a blessing," Gordon told Fox News. "I truly believe that God answered my prayers and allowed me to win so that he could use me in that moment to be a witness and share the gospel. I never want to be ashamed of my faith, and I thank God for allowing me the opportunity to only grow it more and to give him the glory."

In front of millions tuning into Fox Sports that night, Gordon declared: “I want to thank God from the bottom of my heart. If you do not believe in him, I pray that you would soon become a believer.”

Tyler Gordon won the $100,000 scholarship from Dr. Pepper Saturday during the halftime of the Big Ten Championship. (Fox Sports)

"If you were on national TV and a believer and had 45 seconds, would you give praise to God and encourage others to do the same knowing you might face backlash?" Romano tweeted. "Good on the Dr. Pepper kid here for being bold."

The West Virginia native was one of four students trying to throw the most footballs through an oversized Dr. Pepper can in 30 seconds and he won. He also thanked his family and his school.

Finalists for the contest were chosen based on video submissions explaining why the tuition money would be important to them, FOX 59 reports.

“It’ll mean the world to me,” Gordon explained. “Words can’t express how much it means. I’ve tried and, honestly, all I can say is that I’m so excited and so thankful for the opportunity. It’s going to allow me to be able to pursue my goals without being hindered by my debt.”