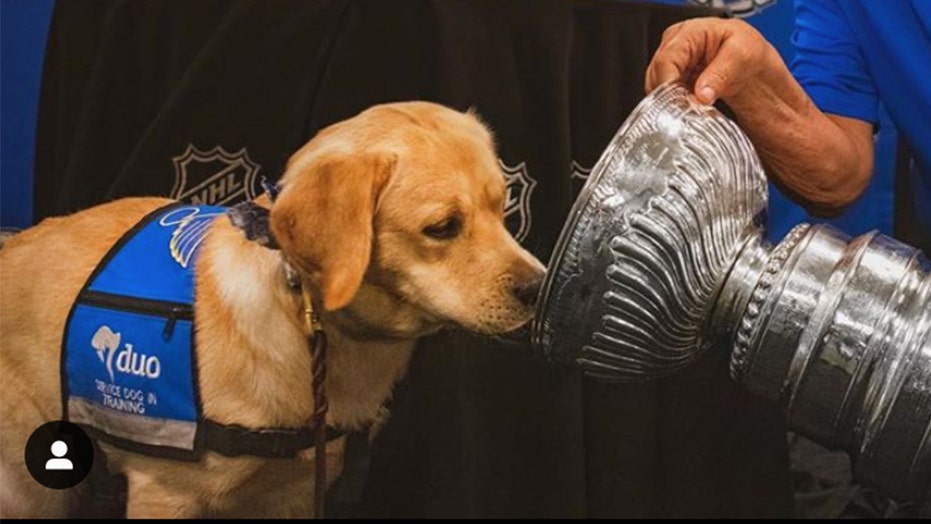 The St. Louis Blues’ team puppy got his moment with the Stanley Cup on Wednesday.

The puppy, named Barclay, had his “dinner of champions” from the prized trophy. Photos posted to Instagram showed the service puppy eating and drinking out of the cup.

Barclay was eating his "dinner of champions" out of the Stanley Cup. (Instagram)

A picture was also posted showing Barclay sitting next to Lord Stanley.

The Blues defeated the Boston Bruins in Game 7 of the Stanley Cup to win their first championship in franchise history.

The pup had joined the team in September 2018 and has garnered nearly 75,000 followers since then.

“Barclay is a bundle of yellow fur joy. He loves people, belly rubs, naps, playing with his mini hockey stick and chasing hockey pucks,” Blues vice president of community development and event management Randy Girsch told People. “He is confident and vibrant when exploring Enterprise Center and, as much as we wish he wouldn’t, he grows bigger every day.”

The team originally brought the puppy onto the team to bring awareness to Duo – a company dedicated to bringing bonds between humans and dogs. The program was intended to help people who have issues with mobility and hearing.