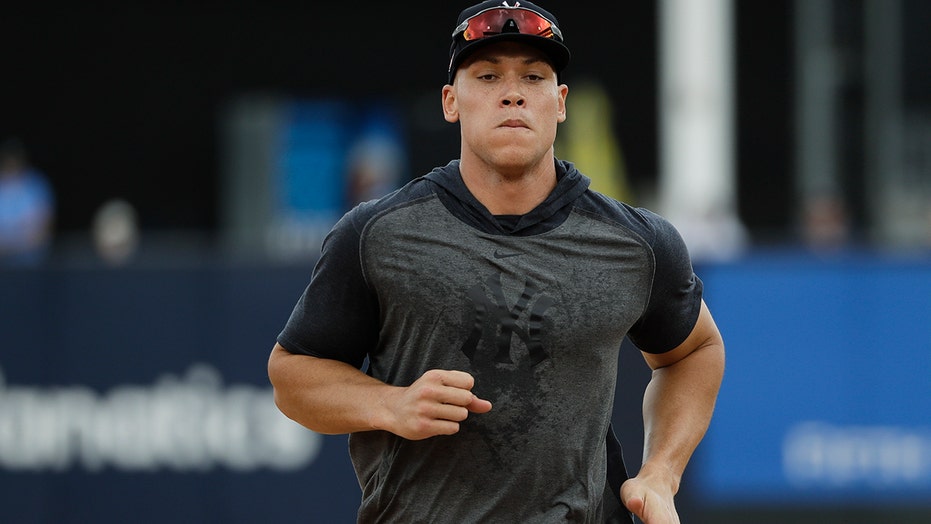 Judge is having more tests to determine the cause of soreness in the right pectoral area near his shoulder. Judge has not hit on the field since spring training started, and the right fielder felt discomfort Friday when he took batting practice for the second straight day in an indoor cage.

“He feels it more now in the pec," general manager Brian Cashman said Tuesday. “It's moved down toward the pec. We're just trying to figure it out and determine what's bothering him. In the meantime, I can just tell you he is feeling better in the last 48 hours."

Stanton strained his right calf on Feb. 26 during defensive drills. Cashman thinks Stanton will be back in April.

“For the time frame, obviously, we've got to get the healing component done for a Grade 1 strain and then rehab it,” Cashman said. “With arguably, what, 3 1/2 weeks to go before opening day I think we'd rather be safe than sorry. "

Since winning the 2017 AL Rookie of the Year award, Judge has been limited to 112 games in 2018 because of a broken right wrist and to 102 games last year due to a strained left oblique.

Stanton was acquired by the Yankees from Miami before the 2018 season. The left fielder played in just 18 regular-season games last year because of a strained left biceps and a sprained right knee.

New York already was without center fielder Aaron Hicks. He had Tommy John surgery on his right elbow on Oct. 31 and is not expected back until summer.

In their absence, the Yankees' outfield may include Brett Gardner in center, flanked by Michael Tauchman and Clint Frazier. Miguel Andujar, 2018 AL Rookie of the Year runner up as a third baseman, has been getting time in left field during spring training.

Cashman has not approached other teams about potential trades.

“I'm always open to doing whatever if it makes sense,"he said, “but from our industry standpoint there's a lot of things that aren't going to make sense early.”

New York also starts the season without three of its top five starting pitchers. Right-hander Luis Severino will missing the season following Tommy John surgery on Feb. 27; left-hander James Paxton is likely out until late May or June following surgery to repair a herniated disk in his back and remove a cyst; right-hander Domingo Germán must serve the final 63 games of an 81-game suspension for violating Major League Baseball’s domestic violence policy. He is eligible to return June 5, barring any postponements.

After agreeing to a $324 million, nine-year contract, right-hander Gerrit Cole heads a rotation that likely will include right-hander Masahiro Tanaka and left-handers J.A. Happ and Jordan Montgomery.

Manager Aaron Boone said Cole was ill on Monday's off day but was back at the ballpark Tuesday and feeling better.

Cole, the expected opening-day starter, is scheduled to make his third spring training appearance Thursday against the Detroit Tigers in Lakeland.

Jonathan Loaisiga and rookies Deivi Garcia and Michael King are among the contenders for the final rotation slot.

“We might very well have all the answers in camp,” Cashman said. “We've liked what we've seen. We've got a lot of exciting players we think can impact us in a positive way.”