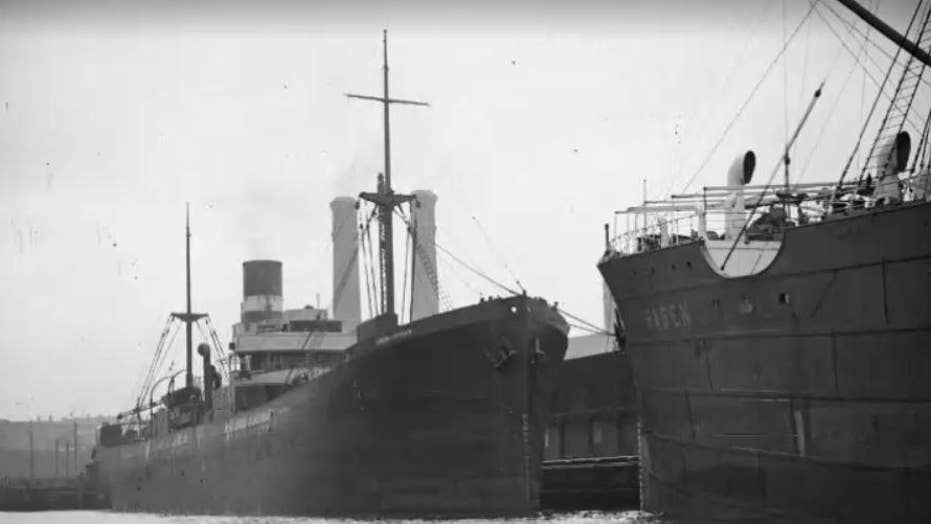 The SS Iron Crown, an Australian freighter sunk by a Japanese submarine during World War II, has been discovered.

The wreck of an Australian freighter has been discovered 77 years after it was sunk by a Japanese submarine during World War II.

The SS Iron Crown was found in the Bass Strait between mainland Australia and Tasmania, about 62 miles off Victoria’s coast south of the border with the neighboring state of New South Wales. The ship was heavily loaded with manganese ore when she struck by a torpedo off the Australian coast on June 4, 1942, sinking just 60 seconds later. The attack claimed the lives of 38 members of the ship’s 43-strong crew.

Experts on the CSIRO research vessel Investigator used multibeam sonar equipment and a special drop camera to find the wreck off the coast of the Australian state of Victoria. An image captured by the camera shows the ship’s intact bow with railings, anchor chains and the Iron Crown’s anchors still in position.

“The Iron Crown is historically significant as one of only four World War II shipwrecks in Victorian waters and is the only ship to have been torpedoed by a submarine in Victorian waters,” said Peter Harvey, a maritime archaeologist with Heritage Victoria, in a statement. “Locating the wreck after 77 years of not knowing its final resting place will bring closure for relatives and family of those that were lost at sea, as well as for Australia’s maritime community.”

“The wreck of Iron Crown appears to be relatively intact and the ship is sitting upright on the seafloor in about 700m [2,297 feet] of water,” Emily Jateff, curator of ocean science and technology at Australia’s National Maritime Museum, who led the search effort, said, in the statement.

“We have mapped the site and surrounding seafloor using sonar but have also taken a lot of close up vision of the ship structure using a drop camera," Jateff added. "This will allow us to create a composite image of the whole site to assist in follow up surveys for its conservation and management.”

The discovery has been reported to the Australian and Victorian governments and a memorial service is planned at the site.

In 2017, the Investigator solved a 74-year mystery when it found the wreck of the SS Macumba, a merchant ship sunk during a Japanese air raid off Australia’s Northern Territory.

Researchers across the globe are working to locate sites of World War II wrecks. The wreck of a World War II U.S. B-24 bomber that plunged into the sea off Bermuda in February 1945 was recently discovered by a team of researchers from the University of Delaware.

Last month, the wreck of World War II aircraft carrier USS Wasp was found in the Coral Sea more than 70 years after the ship was sunk during the Guadalcanal campaign.

Wasp was spotted on the seabed by experts from the vessel RV Petrel, which is part of a research organization set up by the late billionaire Paul Allen.

Earlier this year, the RV Petrel discovered one of the first Japanese battleships to be sunk by U.S. forces during World War II. Imperial Japanese Navy ship Hiei sank on Nov. 14, 1942, in the Solomon Islands.

Microsoft co-founder Paul Allen died in October 2018 from complications of non-Hodgkin’s lymphoma. His research organization has discovered a host of historic military shipwrecks, such as the wrecks of the USS Helena, the USS Lexington and the USS Juneau.

In a separate project, the wreckage of U.S. B-24 bomber, for example, was found in Papua New Guinea. The plane’s wreck was found in 2018, 74 years after it was shot down during a fierce battle with Japanese forces.

Debris can be seen on the SS Iron Crown's bow near the ship's open cargo hold​​​​. ((CSIRO))

A map showing the position of SS Iron Crown on the seafloor. (CSIRO)