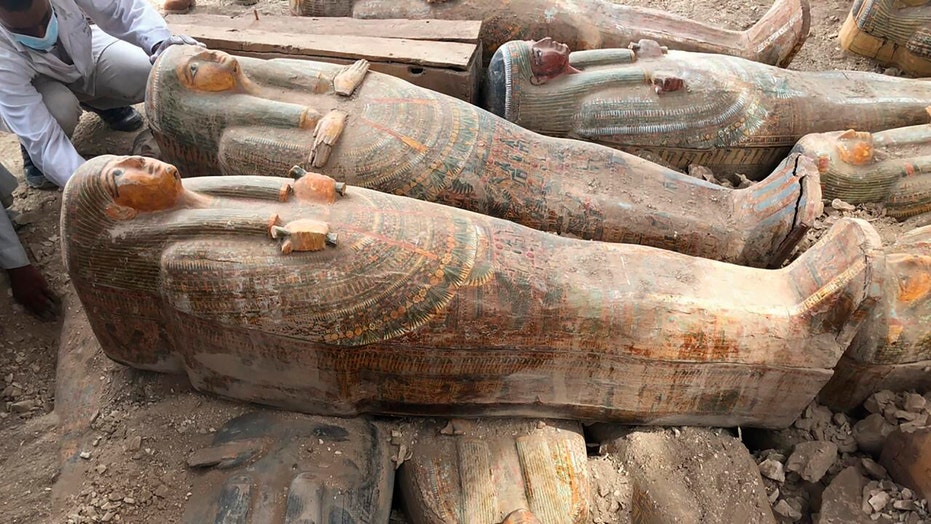 Archaeologists in Egypt have uncovered at least 20 wooden coffins in an ancient necropolis in the southern city of Luxor.

In a statement, the Antiquities Ministry described the find as “one of the largest and most important discoveries that have been announced during the past few years.”

Officials said that the “cache” of coffins was found on two levels of the Asasif Necropolis, a cemetery in the ancient town of West Thebes. The necropolis includes tombs dating back to the Middle, New Kingdom and the Late Periods (1994-332 B.C.).

Photos from the ministry show colored coffins with inscriptions and paintings.

In yet another project, experts unearthed the 2,500-year-old remains of a powerful high priest in dramatic fashion.

The opening of the priest’s stone sarcophagus was broadcast by the Discovery Channel during “Expedition Unknown: Egypt Live,” a two-hour live event. Archaeologists discovered what they describe as an “exquisitely preserved” mummy in the sealed sarcophagus, covered in gold banding.

The incredible find was made at Al-Ghorifa, a remote site about 165 miles south of Cairo. Experts accessed the sarcophagus via a network of ancient tunnels.

Elsewhere, archaeologists found a large ram-headed sphinx that is linked to King Tutankhamun’s grandfather. And a teenage girl’s skeleton was discovered in a mysterious grave near the Meidum pyramid, south of Cairo.

In April, experts announced the discovery of dozens of mummies in ancient desert burial chambers. Archaeologists also explained the strange brown spots on some of the paintings in King Tut's tomb.

In a statement, Egypt's Antiquities Ministry described the find as “one of the largest and most important discoveries that have been announced during the past few years.” (Egyptian Ministry of Antiquities via AP)

An ancient Egyptian gilded coffin has also been garnering plenty of attention recently. Egypt on Tuesday displayed the coffin from the first century B.C., which New York's Metropolitan Museum of Art returned last week after U.S. investigators determined it to be a looted antiquity.

The coffin once held the mummy of Nedjemankh, a priest in the Ptolemaic Period some 2,000 years ago. It was put on display at the National Museum of Egyptian Civilization in Cairo.