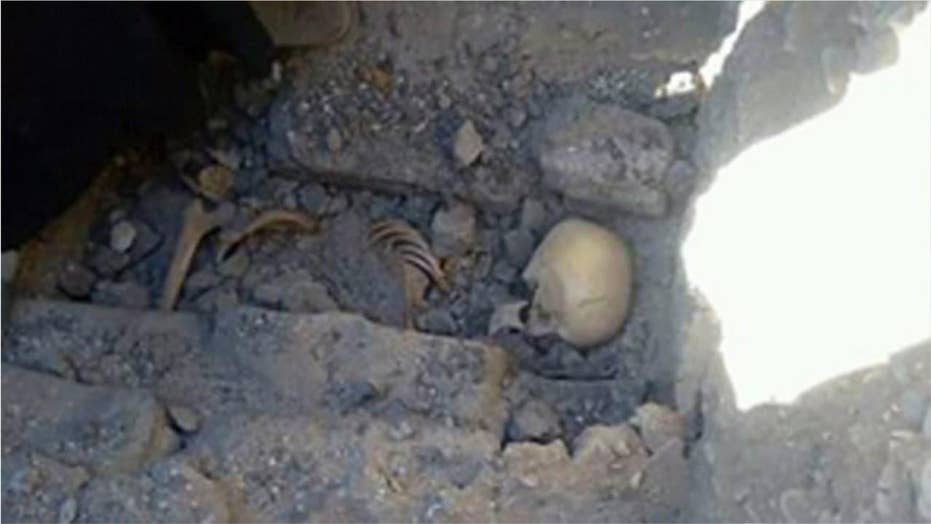 The skeleton of a 13-year-old girl has been discovered in a mysterious grave near an ancient Egyptian pyramid.

The skeleton of a 13-year-old girl has been discovered in a mysterious grave near an ancient Egyptian pyramid.

The burial was found during the excavation of next to the Meidum pyramid south of Cairo, according to Egypt’s Ministry of Antiquities. The teen’s remains were found in a squatting position, the Ministry explained, in a statement.

Archaeologists were able to work out the teen’s age at death by studying her bones, according to LiveScience, although it is not known when her remains were buried. LiveScience notes that the adjacent Meidum pyramid is 4,600 years old.

While no other human remains or artifacts were reportedly found in the girl’s grave, items have been unearthed elsewhere at the site, which contains an ancient cemetery. Archaeologists have uncovered two animal heads, which are likely to be bulls and three symbolic pottery pots, officials said.

Archaeologists have been excavating near the Meidum Pyramid south of Cairo. (Egyptian Ministry of Antiquities)

In a separate project, experts recently explained the strange brown spots on some of the paintings in King Tutankhamun’s tomb.

Last month, archaeologists also announced the discovery of ancient tombs in the Nile Delta north of Cairo. In a separate project, two ancient tombs dating back to the Roman period were uncovered in Egypt’s Western Desert.

Archaeologists have uncovered two animal heads, which are likely to be bulls, from the site. (Egyptian Ministry of Antiquities)

In November, archaeologists confirmed the discovery of eight limestone sarcophagi containing mummies at a site 25 miles south of Cairo. Last year, researchers also uncovered a "massive" building that was once part of Egypt’s ancient capital city.

The discovery is the latest fascinating archaeological find in Egypt. (Egyptian Ministry of Antiquities)

The pots discovered during the excavation. (Egyptian Ministry of Antiquities)