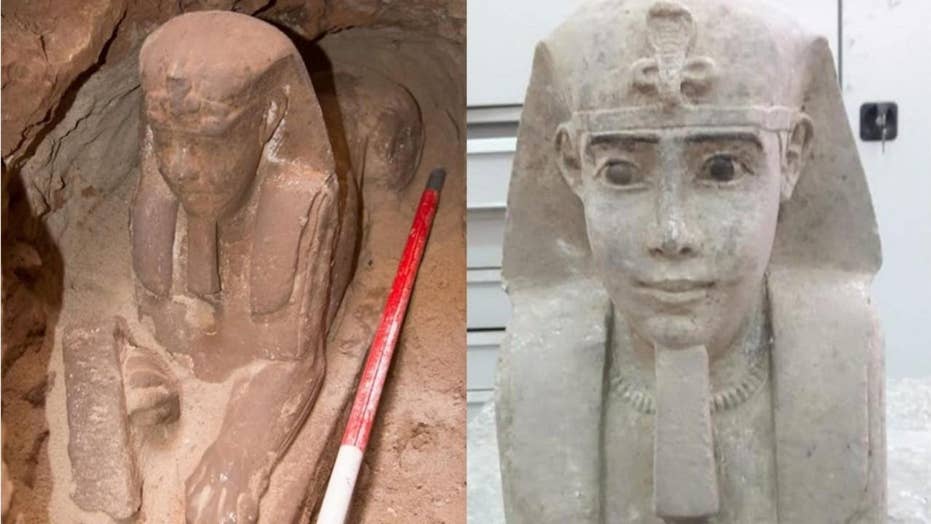 A sandstone sphinx has been discovered by archaeologists during a project to reduce groundwater at Kom Ombo temple in Aswan.

Archaeologists have discovered a stunning sphinx statue at an ancient temple in southern Egypt.

The sandstone statue was discovered during a project to reduce groundwater at Kom Ombo temple in Aswan.

The statue likely dates back to the Ptolemaic period, between 305 B.C. and 30 B.C., according to Dr. Mostafa Waziri, general secretary of Egypt’s Supreme Council of Antiquities.

In a Facebook post, Waziri explained that the statue was found in the southeastern side of the temple, where two sandstone reliefs of King Ptolemy V were discovered two months ago.

Sphinx statues, which have a lion’s body and a human head, typically depict a king and are often found guarding the entrances to ancient Egyptian temples.

General Director of Aswan Antiquities Abdel Moneim Saeed said that more research will be done on the newly discovered sphinx.

The sphinx is the latest fascinating ancient find in Egypt. Another sphinx was recently uncovered during roadwork in the city of Luxor, 112 miles north of Aswan.

While the famous Great Sphinx of Giza on the outskirts of Cairo is the best known, there are a number of smaller sphinx statues in Luxor.

In another project, archaeologists recently unlocked the secrets of a mysterious ancient ‘cursed’ black granite sarcophagus.

The massive coffin, which was excavated in the city of Alexandria, was found to contain three skeletons and gold sheets with the remains. The tomb also dates back to the Ptolemaic era.

Experts also recently found the oldest solid cheese in the tomb of Ptahmes, mayor of the ancient city of Memphis.

A mummy buried in southern Egypt more than 5,000 years ago, has also revealed its grisly secrets, shedding new light on prehistoric embalming practices.

In another project, experts unearthed a 2,200-year-old gold coin depicting the ancient King Ptolemy III, an ancestor of the famed Cleopatra.

In Australia, archaeologists found the tattered remains of an ancient priestess in a 2,500-year-old Egyptian coffin that was long thought to be empty.