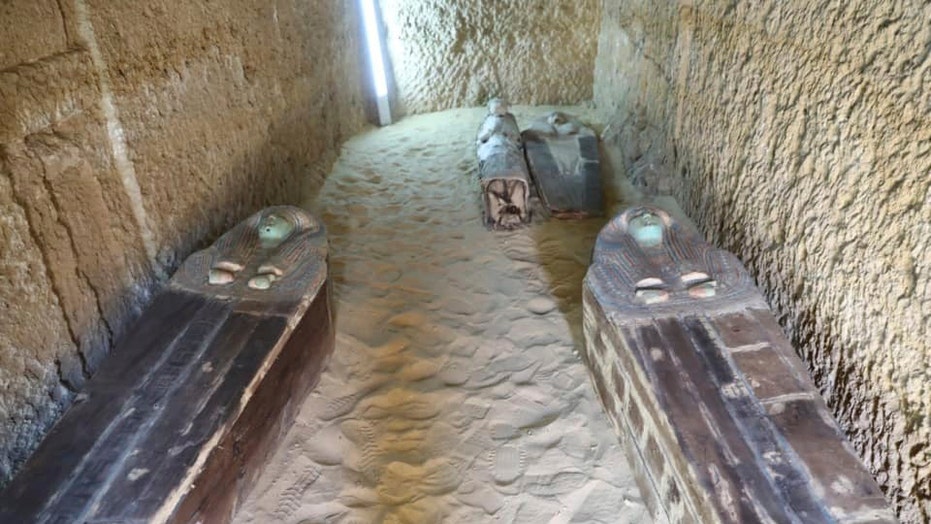 Archaeologists in Egypt have uncovered an ancient cemetery near the famous Giza pyramids just outside Cairo.

In a Facebook post, Egypt’s Ministry of Antiquities said that the discovery was made at the Giza Plateau, where the pyramids are located.

One tomb belongs to a priest and judge named Behnui-Ka as well as an official named Nwi, who is described as “chief of the great state, overseer of the new settlements and the purifier of King Khafre.”

The cemetery was uncovered on the Giza Plateau. (Ministry of Antiquities via AP)

Ashraf Mohi, the head of the Giza Plateau archaeological site, says scientists know that the cemetery had been reused extensively in the Late Period (664-332 B.C.), as archeologists found painted and decorated wooden anthropoid coffins, and wooden and clay funerary masks from that period.

Egypt’s former Minister of Antiquities Dr. Zahi Hawass attended the event where the discovery was announced. The cemetery is located next to another graveyard where pyramid builders were buried, he said.

Archaeologists discovered painted and decorated wooden anthropoid coffins at the site. (Ministry of Antiquities via AP)

The secrets of a mysterious “Tomb of the Warriors” were also recently revealed in a PBS documentary, and solving an ancient puzzle, archaeologists discovered the wreck of an extremely rare vessel that traveled the Nile around 2,500 years ago.

In another project, archaeologists recently found a large ram-headed sphinx that is linked to King Tutankhamun’s grandfather. In other projects, a teenage girl’s skeleton was discovered in a mysterious grave near the Meidum pyramid, south of Cairo.

Last month, experts announced the discovery of dozens of mummies in ancient desert burial chambers. Archaeologists also recently explained the strange brown spots on some of the paintings in King Tutankhamun’s tomb.

Archaeologists discovered a number of artifacts, including a statue. (Ministry of Antiquities via AP)

The ancient cemetery site. (Ministry of Antiquities via AP)