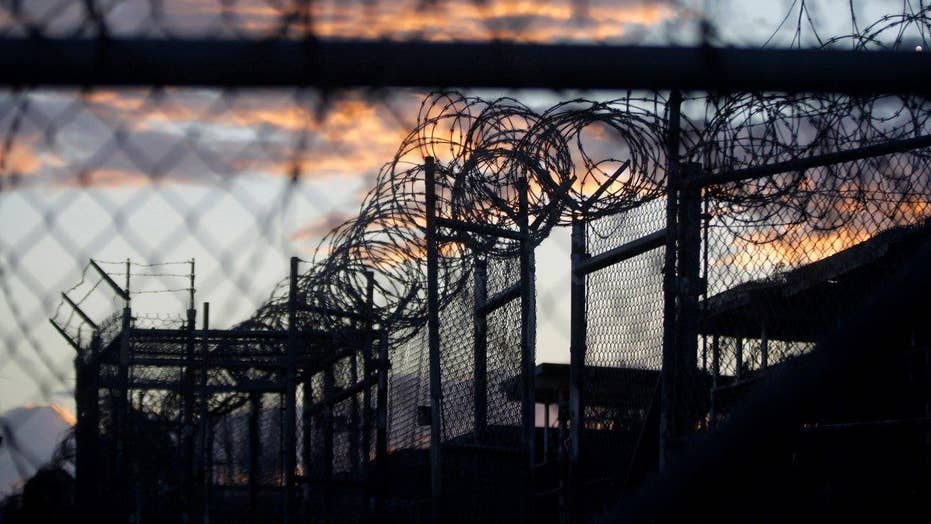 How many released detainees go back to terror? 'The O'Reilly Factor' investigates

President Obama's famous pledge to close the Pentagon's Guantanamo Bay detention facility was ultimately done in by the very evil of the men it houses.

While hundreds of enemy combatants and terror suspects have been through the facility since the war on terror began - with many returning to the fight - the most hardcore Al Qaeda operatives ever captured remain there. They are too dangerous to set free, and no one else wants them.

During its peak, Gitmo held some 778 suspected Al Qaeda operatives. Obama acclerated the policy of his predecessor, President Bush, to free those deemed to no longer be a risk. Within the last week, another 14 were released from the facility, and turned over to other countries willing to hold them.

But the federal government admits that once they leave Gitmo, there's no guarantee their new countries will keep them locked up. And the Pentagon has estimated that at least 30 percent returned to the battlefield, killing Americans and their allies.

Khalid Sheikh Mohammed is shown in this file photograph during his arrest on March 1, 2003. (Reuters Photo) (Reuters)

“The policy of closing Guantanamo Bay has made America less safe,” said Sen. Ron Johnson, R-Wis., chair of the Senate Committee on Homeland Security and Governmental Affairs. “The best way to gather intelligence long term to help prevent Islamic terror attacks is by capturing those engaged in Islamic terror groups and questioning them over a long period of time.”

“As long as the war on terror continues, as long as Islamic terrorists want to attack the civilized world including the U.S. and U.S. interests, we ought to try to find them, and where we can, capture them and question them,” Johnson said. “I don’t know why we would handcuff ourselves and not have a detention facility.”

During the terms of President Bush, who opened Gitmo after 9/11, the prisoner count swelled to 779. It had dropped to 242 when Obama took office, and now stands at 41.

Still at Gitmo for more than a decade are some of the “worst of the worst,” Johnson said.

The most famous - and most dangerous - occupant is Khalid Sheikh Mohammed, a Pakistani senior Al Qaeda “recruiter, financer and operational planner” who the Pentagon calls the “mastermind” of the 9-11 attacks. The 52-year-old terrorist also was indicted for his role in the Feb. 26, 1993 bombing of the World Trade Center.

Retired Army Maj. Gen. Jay Hood, who oversaw the detention facility, and who has personally interviewed many of the terrorists there, said clearly Khalid Sheikh Mohammed and other top Al Qaeda operatives “should never leave.”

In this undated photo provided by Flashpoint Partners, a man who Flashpoint has identified as confessed 9/11 architect Ramzi Binalshibh is shown. (AP Photo) (AP)

Abd al Aziz Ali, 40, a citizen of Pakistan and an Al Qaeda senior member and planner. His military records show that under the direction of his uncle, Khalid Sheikh Mohammed, he helped plan 9/11 and was involved in numerous other plots against the US.

Abd al Rahim al Nashiri, 52, a citizen of Saudi Arabia, is considered “one of Al Qaeda’s most skilled, capable and prolific operational coordinators.” With a long jihadist history, he and has been linked to as many as a dozen plots to attack U.S. and western interests including the successful bombing of the USS Cole off the coast of Yemen on Oct. 12, 2000. He reported directed to Usama bin Laden, according to the U.S. military.

Abd al Hadi al Iraqi, 56, a citizen of Iraq, is a senior member of Al Qaeda, according to the U.S. military, which determined that in addition to serving as an accountant and commander for the terror network, al Iraqi also initiated attacks on coalition forces in Afghanistan.

Mustafa Ahmed al Hawsawi, 48, a citizen of Saudi Arabia, is a senior Al Qaeda member who served as a “facilitator, financial manager and media committee member” his records show. He is accused of planning the movement of 9-11 hijackers and helping to obtain financing for the terror plot.

Ramzi Bin al Shibh, a citizen of Yemen, is a senior Al Qaeda operative who, according to his military file, was the “coordinator” of the 9-11 attacks.

Walid Bin Attash, a citizen of Yemen, is a senior Al Qaeda operative who served as a trusted bodyguard for Bin Laden. His military file said the 38-year-old helped coordinate and acquire materials for the USS Cole bombing.

After reviewing the background of many of those still at Gitmo, Hood said it is “obvious why other countries around the world do not want to take them off our hands.”