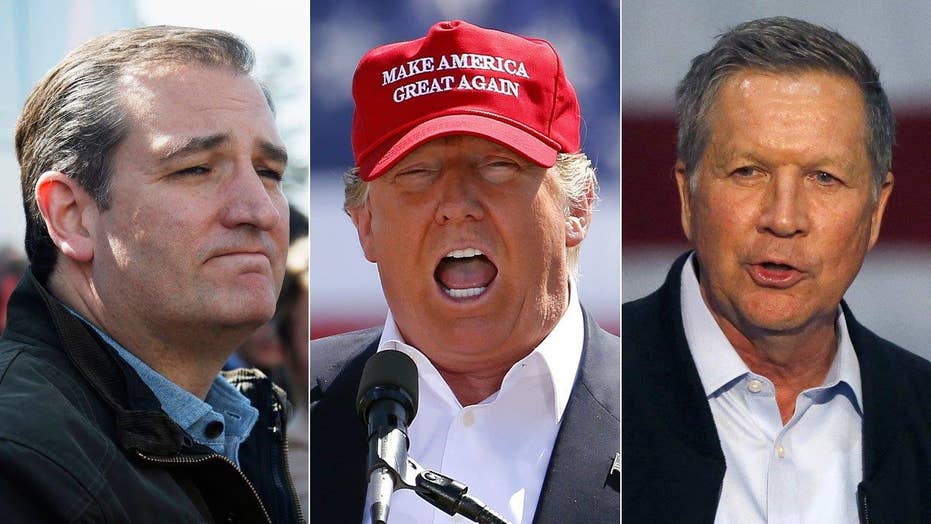 Strategy Room: David Mercer and Adam Goodman discuss whether Walker endorsement will give Cruz the boost he needs to win the state

Wisconsin Gov. Scott Walker got off the sidelines Tuesday and officially endorsed one-time rival Texas Sen. Ted Cruz for president -- posing another hurdle for Donald Trump in the state's tight primary contest where the front-runner is facing some serious headwinds.

Going into next Tuesday's contest, several influential conservative radio hosts in Wisconsin already have aligned against the billionaire businessman. Walker chose to announce his support for Cruz on-air with one of them, popular Milwaukee talk radio host Charlie Sykes.

“It’s time we elected a strong new leader. I’ve chosen to endorse Ted Cruz,” he said, during an interview with Sykes.

A day earlier, Trump seemed to stumble during an interview with the same host, apparently caught off guard when informed Sykes was opposing his bid.

Trump, Cruz and Ohio Gov. John Kasich all are campaigning in Wisconsin on Tuesday as they compete for votes.

Walker, whose short-lived run for the GOP nomination ended in September, had said he would support the eventual Republican nominee, but had been sending strong signals prior to Tuesday’s announcement that he would back Cruz.

Walker has been critical of Trump and said last week that Kasich “cannot” win the nomination.

Walker’s endorsement didn’t come as a surprise to Trump, who weighed in on Twitter Monday night.

“After the way I beat Gov. Scott walker (and Jeb, Rand, Marco and all others) in the Presidential Primaries, no way he would ever endorse me!”

But Trump’s chest-beating tactics may not be resonating as well with Wisconsin voters, who head to the polls on April 5. Polls suggest the race is nearing a dead heat between Trump and Cruz, as talk radio hosts go to bat for the Texas senator.

On Monday, Sykes slammed Trump during a rocky 17-minute telephone interview with the billionaire businessman. Sykes pressed Trump to apologize to Cruz’s wife, Heidi Cruz, for retweeting an unflattering picture of her next to a picture of Trump’s wife Melania Trump, a former model.

At times, Trump seemed to be caught off guard by Sykes’ questions.

“Mr. Trump, before you called into my show, did you know that I’m a hashtag ‘NeverTrump’ guy?”

Trump responded, “No, I didn’t know that, but I assume you’re also an intelligent guy.”

A solid win in Wisconsin by Cruz would likely require Trump to win the five remaining winner-take-all contests to avoid scrapping for the nomination at a contested national convention in Ohio this summer.

It isn’t immediately clear how much Walker’s endorsement will help Cruz, who has also won the backing of other influential conservative talk radio hosts in the Milwaukee market that reach into heavily Republican suburban counties. Walker’s approval rating in the state hasn’t cracked 40 percent in more than a year.

Wisconsin has 42 delegates up for grabs, with 18 going to the statewide winner and 24 divided up to the winner in each of the state’s eight congressional districts.

Ryan, too, has criticized Trump for some of his more controversial remarks, while remaining officially neutral in the race.