President Trump on chances Don McGahn testifies, the crisis in Venezuela and 2020 contenders

The White House asked former White House counsel Don McGahn to say publicly that he did not believe that President Trump obstructed justice, Fox News confirmed Friday -- although McGahn’s attorney said they never perceived the request as a threat.

“We did not perceive it as any kind of threat or something sinister. It was a request, professionally and cordially made,” McGahn’s attorney William Burck said in a statement.

The Wall Street Journal first reported that White House officials made the request to McGahn, but that McGahn declined -- purportedly because he didn’t want to weigh in on the evidence in the report beyond his own testimony, and did not want to comment on his own testimony in isolation.

The request, made by White House lawyer Emmett Flood, came after the release of Special Counsel Robert Mueller’s Russia report last month. The report did not find evidence of collusion between the Trump campaign and the Russian government, and did not come to a conclusion on whether President Trump obstructed justice.

However, it did outline a number of controversial actions and requests made by the president that were examined as part of Mueller’s obstruction inquiry.

One of those examples Mueller outlines was an instance in which Trump called McGahn and told him to have Mueller fired. McGahn is said to have ignored that request.

The report also said that when media outlets reported the president’s request for McGahn to have Mueller removed, the president directed White House officials “to tell McGahn to dispute the story and create a record stating he had not been ordered to have the special counsel removed.”

Trump has denied the claim that he told McGahn to fire Mueller “even though I had the legal right to do so.” 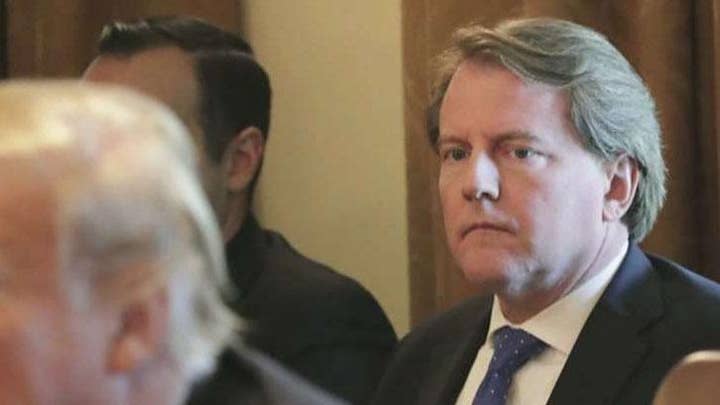 “If I wanted to fire Mueller, I didn’t need McGahn to do it, I could have done it myself,” he tweeted.

Democrats have quickly seized on the examples as proof that Trump did in fact obstruct justice, and have pushed for further investigations. The House Judiciary Committee subpoenaed McGahn to appear before the panel to testify and provide documents related to the Mueller probe, but the White House this week said it had ordered McGahn defy the subpoena and not appear for testimony.

“The White House provided these records to Mr. McGahn in connection with its cooperation with the Special Counsel’s investigation and with the clear understanding that the records remain subject to the control of the White House for all purposes,” White House Counsel Pat Cipollone wrote in a letter to Chairman Jerry Nadler, D-N.Y.

The fight comes amid a broader battle between congressional Democrats and the White House over documents and testimony related to the Mueller report. Democrats on the House Judiciary Committee voted this week to hold Attorney General William Barr in contempt of Congress for his refusal to hand over the full, unredacted report to Congress and the underlying evidence in response to a committee subpoena.

“We did not relish doing this, but we have no choice,” Nadler said after the vote. "We’ve talked for a long time about approaching a constitutional crisis. We are now in it."

The White House on Wednesday announced that President Trump had asserted executive privilege over the documents in a bid to protect them from release, criticizing Nadler’s “blatant abuse of power.”

"The Attorney General has been transparent and accommodating throughout this process, including by releasing the no-collusion, no-conspiracy, no-obstruction Mueller Report to the public and offering to testify before the Committee. These attempts to work with the Committee have been flatly rejected. They didn’t like the results of the report, and now they want a redo," Press Secretary Sarah Sanders said in a statement Wednesday.