Trump notes that special counsel Robert Mueller completed his investigation into Russian interference in the 2016 presidential election and found 'no collusion and no obstruction.'

Instead, direct requests for the materials must go to the White House, setting up an even more intense legal battle between the Trump administration and congressional Democrats.

White House Counsel Pat Cipollone penned a letter to House Judiciary Committee Chairman Jerrold Nadler, D-N.Y., on Tuesday, notifying him that McGahn will not comply with the subpoena, which, according to the letter, seeks certain White House records given to McGahn that are related to Special Counsel Robert Mueller’s investigation. 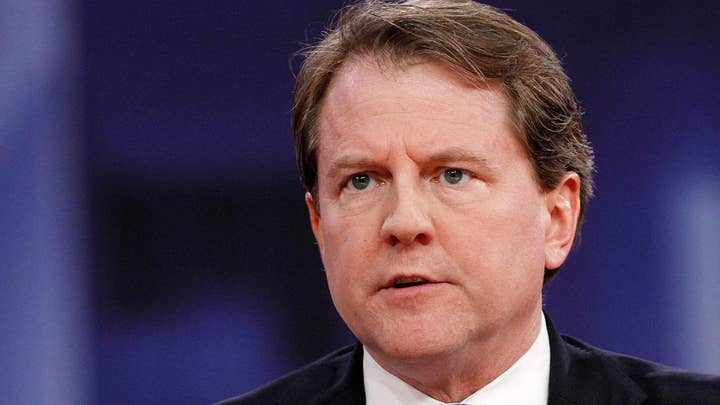 Cipollone wrote that acting chief of staff Mick Mulvaney “has directed Mr. McGahn not to produce these White House records” in response to the committee’s subpoena issued on April 22.

“The Department of Justice is aware of and concurs with this legal position,” Cipollone wrote.

The letter to Nadler comes amid negotiations for McGahn’s testimony, and specific documents committee Democrats are seeking.

“As I said more than a month ago, when Democrats subpoenaed Don McGahn, they subpoenaed the wrong person. The White House is nevertheless seeking to accommodate Democrats’ unwieldy demands. I hope Chairman Nadler accepts this reasonable offer rather than continuing to reject good faith offers to negotiate.”

On April 22, days after the release of Special Counsel Robert Mueller’s Russia report, which featured McGahn prominently in its section related to the obstruction of justice inquiry, the committee subpoenaed him to appear before the panel to testify, and to provide documents related to the Mueller investigation.

“[McGahn’s] testimony will help shed further light on the president’s attacks on the rule of law, and his attempts to cover up those actions by lying to the American people and requesting others do the same,” Nadler said last month.

But the White House ordered that McGahn defy the subpoena, and not appear for testimony. That request prompted President Trump to announce that he planned to fight “all” subpoenas for current and former White House officials.

On Tuesday, when asked whether the White House would allow McGahn to comply with the subpoena, White House Press Secretary Sarah Sanders said it was unlikely.

“I don’t anticipate that that takes place,” Sanders said on ABC News’ “The Investigation” podcast Tuesday. “We consider this to be a case closed and we’re moving forward to do the work of the American people.”

The president, last week, in an exclusive interview with Fox News, again said McGahn would not testify, after calling the subpoena "ridiculous."

McGahn’s interview with special counsel investigators factored prominently into the section probing whether the president obstructed justice, including a claim that McGahn disobeyed Trump’s call to have him seek Mueller’s removal.