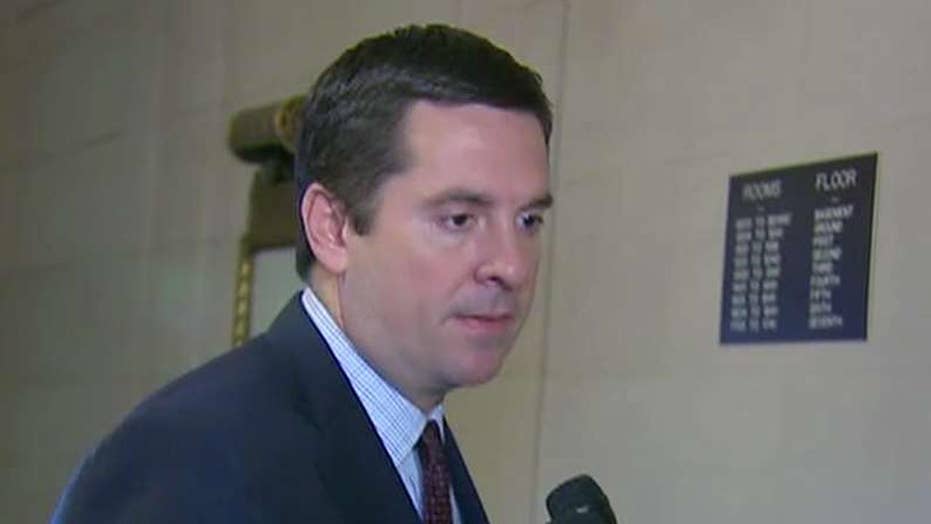 Nunes defends his visit to the White House

New fallout in the House investigation into Russia ties

Two White House aides have emerged as sources for a top House Republican who said earlier this month that Trump transition team members were incidentally caught up in surveillance conducted on foreign targets after the presidential election.

It had been unclear who showed embattled House Intelligence Committee Chairman Devin Nunes the documents, though it previously emerged the California Republican viewed the files on White House grounds.

But on Thursday, “several” current officials identified the sources to The New York Times as Ezra Cohen-Warnick, the senior director for intelligence at the National Security Council, and Michael Ellis, an attorney at the White House Counsel’s Office who previously worked for the House Intelligence Committee.

White House Press Secretary Sean Spicer on Thursday wouldn't confirm or refute the report; however, he did announce the White House had just hours before submitted a letter to the chairmen and ranking members of the House and Senate intelligence committees, inviting them to the White House to "see the information" that had recently "come to light."

"We are willing to provide them the materials that we have come across," Spicer said.

Asked if President Trump specifically directed anyone to look into allegations he had made about the Obama administration spying on him, Spicer said he wasn't "aware of anything directly."

The Times report appears to cast the actions of the White House aides as being undertaken on their own volition.

Earlier this month, after Trump tweeted that former President Barack Obama had “wiretapped” him, Ellis began viewing classified reports that showed “intercepted communications of foreign officials,” The Times reported. The reports mainly focused on foreign officials “talking about how they were trying to develop contacts within Mr. Trump’s family and inner circle,” according to The Times.

A spokesperson for Nunes declined to comment on the Times report.

"As he’s stated many times, Chairman Nunes will not confirm or deny speculation about his source’s identity, and he will not respond to speculation from anonymous sources," Director of Communications Jack Langer said in a statement.

Rep. Adam Schiff, top Democrat on the House Intelligence Committee, told reporters Thursday, “We need to get to the bottom of whether this was some stratagem by the White House.”

"Obviously that would be deeply concerning to us. And if it’s necessary for us to interview these two individuals, then we should do so," he said. "… And I do think that the White House has a lot of questions to answer."

As to the White House invitation to view the materials, he indicated he could go as early as Friday.

Nunes shocked many observers with his revelation that Trump team members had been “unmasked” and had their identities widely disseminated throughout the government. Sources told The Times that Nunes’ characterization of the reports as having nothing to do with Russia appeared to be correct.

After his shocking news conference, Nunes, in a move panned by many Democrats, went to the White House to inform Trump of what he had found.

Nunes has said the intelligence collection appeared to have been done lawfully, and the intercepts of Trump team members were only collected incidentally. However, Nunes raised questions over the apparent unmasking of multiple officials and the extensive dissemination of the information -- ostensibly to be used against Trump.

During his briefing, Spicer alluded to a former Obama administration official who appeared to confirm this week some form of surveillance was being undertaken, disseminated and preserved due to a distrust of Trump.

"They have admitted on the record that that was their goal, to leak stuff," Spicer said.

Though The Times report doesn’t dispute any essential facts of what Nunes said, it’s likely to embolden detractors who already say Nunes is too close to the White House and Trump – on whose transition team Nunes served.

Democrats want Nunes to recuse himself from the Russia probe. Nunes has resisted, defending his actions.