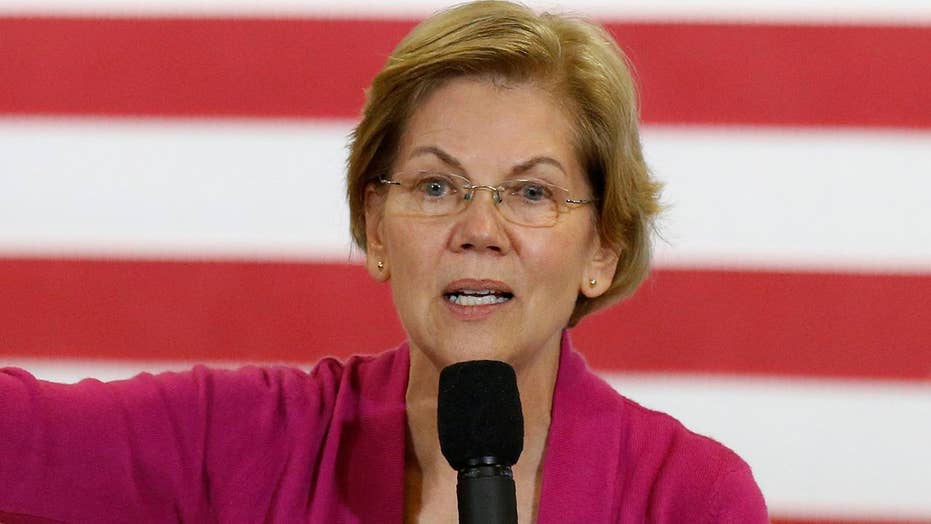 Democratic presidential candidate Sen. Elizabeth Warren, D-Mass., released another plan Wednesday ahead of next week's Iowa caucuses — and this one could land those sharing false information online behind bars.

Warren plans to crack down on "digital disinformation" by working with social media companies to address false posts, having them label certain content, ban accounts trying to interfere with elections and alert users who have interacted with content determined to be disinformation, among other things. She would also lead a charge to criminalize the mere spreading of false information about the process of voting in U.S. elections.

"I will push for new laws that impose tough civil and criminal penalties for knowingly disseminating this kind of information, which has the explicit purpose of undermining the basic right to vote," she says on her campaign website. Warren's plan says this criminally punishable false information would be "about when and how to vote" in elections.

Warren cites social media efforts in the two most recent federal elections that told people the wrong election date or that voting by text was allowed in that year's election.

Warren's plan would also bring back the cybersecurity coordinator at the National Security Council and establish federal information sharing rules to protect privacy.

Some online took the chance to poke fun at Warren's past.

"Would this apply to the tall tales you tell and those networks allow @ewarren?" Sen. Rand Paul, R-Ky., asked on Twitter. This comment was likely a thinly veiled reference to the controversy about Warren's claimed Native-American heritage, including a DNA test she released in 2018 which later prompted an apology to Cherokee Nation.

Warren, of course, is not planning to criminalize all disinformation, but simply disinformation related to the physical process of casting votes. But even banning that level of speech could cause her to run into First Amendment issues, according to the Washington Examiner's Brad Polumbo.

"In other words, Warren wants to criminalize the spread of information the government deems to be false," he wrote Wednesday. "This unconstitutional proposal not only flies in the face of the First Amendment and core constitutional principles of free expression, but it’s also ripe for abuse."

Polumbo went on to say the banning of some election-related disinformation could lead to a slippery slope.

"Once we open this door, government censorship will inevitably creep beyond just saying elections are on the wrong day or that the would-be censors in power will stretch the definition of 'election disinformation' to include political predictions and commentary they dislike," he wrote. "Like it or not, a consequence of free and open debate is that people will have the right to say untrue or misleading things."

Warren, however, is concerned with another important American right — the right to vote.

"Voter suppression efforts of any kind offend basic American values," she says on her campaign website.

"The stakes of this election are too high — and we need to fight the spread of false information that disempowers voters and undermines democracy," Warren says.