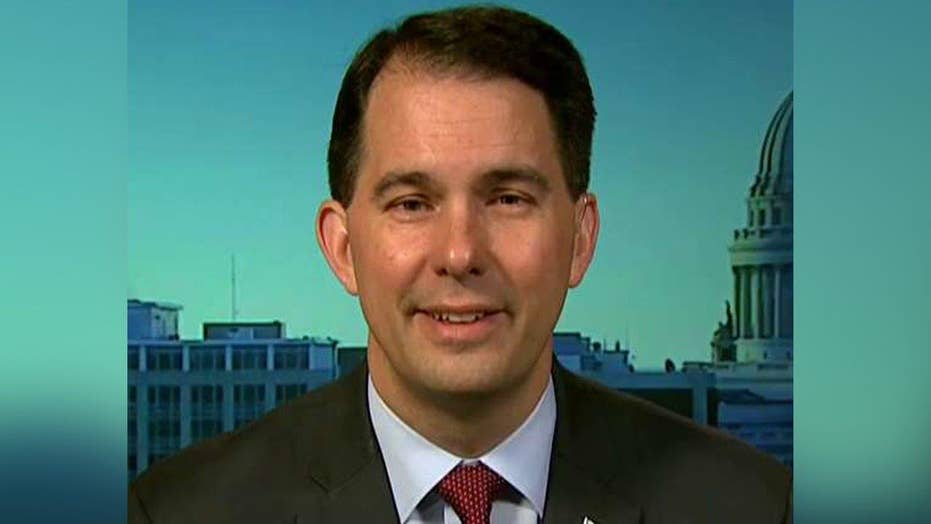 Gov. Walker throws his support behind Cruz ahead of primary

Wisconsin Gov. Scott Walker said Tuesday that he’s ready to support the candidate who wins the Republican presidential nomination, but is confident Texas Sen. Ted Cruz – and not front-runner Donald Trump – will be running against Democratic rival Hillary Clinton in November as voting was set to begin in his state’s primary contests.

Walker, who has been vigorously campaigning in Wisconsin for Cruz, said the Badger State’s primary could be “a turning point in the election,” while predicting “nearly record turnout.”

Still, Walker expressed his support for whoever wins the GOP nomination.

“I’m gonna support the Republican running against Hillary Clinton because Hillary Clinton would be an awful, awful president for the United States,” Walker said Tuesday on “Fox & Friends”

“I think the real reason he’s ahead [in Wis. polls] is because, like I said, voters are informed,” Walker said of the Texas senator.

Walker, who bowed out of his own nascent White House run in September, endorsed Cruz last week. While endorsements have appeared to matter little this election cycle, Walker’s vote of confidence could prove to be different. A Marquette Law School poll found likely Republican voters in the state gave Walker an 80 percent approval rating, and former New York City Mayor Rudolph Giuliani mused on “Fox & Friends” that Walker’s nod could add 5 or 10 percentage points to Cruz’s Wisconsin total.

Yet, despite the governor’s popularity among his state’s right-leaning electorate, Walker has been a frequent recent target of Trump, something Walker said he did not take to heart.

“It’s not personal in terms of candidates; I could care less what other candidates say,” Walker said.

While Walker said he still believes his decision to suspend his presidential run early on was “the right thing to do at the time,” he also plainly sees himself as a party leader going forward, particularly if a Republican wins the White House.

“For me, we’ll see what the future holds,” Walker said. “I can run for re-election [as governor] in 2018. I‘d love to join a Republican president, not in his Cabinet, but as a leader of Republican governors across the country.”