More voters are casting their ballots early ahead of the Nov. 6 midterm elections. (AP)

Voters in Harris County, Texas, have come out in force during this year's early voting period, surpassing voter turnout for the entire 2014 midterm election season and positioning the county to possibly see 1 million voters for the first time in a midterm election.

By the end of Thursday, the Harris County Clerk’s Office reported 64,343 ballots had been cast, with another 3,656 arriving by mail, bringing the total to 755,877, the Houston Chronicle reported. Harris County includes Houston.

The county operates 46 early voting locations, and more than 700 polling places will be open Tuesday.

The turnout is so unprecedented that researchers are now viewing the election in the same lens as a general election, which tends to draw more voters to the polls.

“This is the first time we’re going to have a presidential-type vote, where you’re going to see the majority of voters casting their ballots early,” said Hector de Leon, spokesman for the clerk’s office. 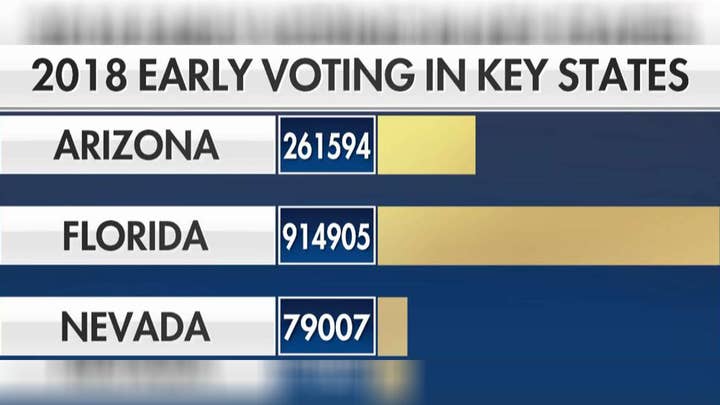 In past presidential years, two-thirds to three-fourths of voters cast early ballots, de Leon said. If average turnout on Friday comes in at around 60,500, the county could come close to or exceed 1 million ballots cast by the end of the election.

The spike in turnout appears to be driven in part by Hispanics, according to an analysis, de Leon said.

More than 16 percent of voters to date have Spanish surnames, a higher share than in any previous midterm election.